8 hidden dangers SQ girls may face on the job

You probably know by now that being an SQ girl is not as glamorous as it sounds.

They may always look beautiful and are paid to travel the world, but their job is physically-demanding and exhausting.

Besides the hard work, they also have to face many risks and potential job hazards while flying for a living.

Here are eight hidden dangers SQ girls may face on the job.

The work that cabin crew do on board is quite literally, back-breaking.

When you are on a flight, you may have noticed that crew don’t assist passengers to put their hand luggage in the overhead compartments (and they’re not required to) unless they really need the help.

This is because back injuries are one of the most common injuries that crew sustain on the job and they are usually caused by the lifting of heavy objects.

The crew also has to constantly bend over or squat throughout the flight when they do work such as loading meal carts and retrieving meals for passengers.

It puts additional strain on their backs and can lead to the development of back problems over time.

Whenever we fly, we will be exposed to low levels of radiation at flight altitudes which generally do not pose any health risks.

However, because cabin crew are frequently exposed to the radiation, it may put them at higher risk of developing reproductive issues and they may need to consider reducing their exposure if they are planning a pregnancy.

Also, jet-lag may also affect their menstrual cycles and cause their periods to be irregular.

Frequent flying can take a toll on the body, and it is especially true for cabin crew who are working whenever they are flying.

The irregular working hours across different time zones can disrupt their body clocks, leading to issues like sleeping difficulties and fatigue.

Furthermore, working in an enclosed work environment with hundreds of passengers increases their risk of getting germs, either from breathing in the dry cabin air or touching things like toilet door handles or used meal trays. 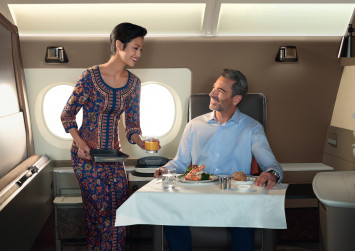 Free alcohol on the plane is great for passengers who want to have a drink to relax and unwind on the flight.

However, there may be some who end up getting drunk and creating a scene or getting violent.

Cabin crew have to put themselves in front of the passenger to calm them down, which may not be easy if they are aggressive.

If that fails, they have to restrain the passenger which also puts them at the risk of getting hurt.

Crew also need to protect themselves from passengers who might try to make unwanted advances to them.

There’s a reason why cabin crew tend to spend more money on beauty products and treatments.

The frequent use of makeup can be very taxing on the skin resulting in problems like clogged pores and skin irritations.

It also doesn’t help that the air in an aircraft environment is very drying and skin can get dehydrated easily.

Furthermore, wearing long hours of make up while working on overnight flights coupled with irregular sleeping and eating timings can also contribute to poor skin condition.

It can be difficult for stressed skin to rest and recover properly.

It’s not just their skin that gets stressed, using too much hair products can also damage cabin crew’s hair.

They have to regularly use hair spray and products like hair wax and gel to achieve the perfectly coiffed hairdos.

The product build-up, frequent blow-drying and combing during styling may affect the healthiness of their hair and cause problems such as dry and damaged hair, sensitive scalp and hair loss.

Having to constantly pull their hair into a tight bun can also lead to thinning and broken hair near their hairline, which may result in receding hairlines.

DANGERS WHILE WORKING ON THE PLANE

You can never take safety for granted when working on an aircraft. 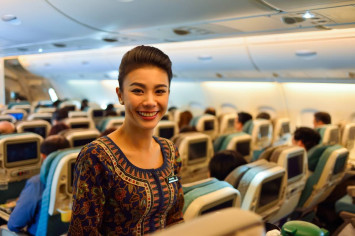 Cabin crew are equipped with the knowledge to handle emergency situations such as aircraft hijacking, bomb threats and fires, which have the danger of spreading quickly on a plane.

They are trained to be vigilant and always have to be on the lookout for suspicious objects or people in the aircraft.

There is also always the possibility of unpredictable weather conditions causing bad turbulence which may lead to injuries, and aircraft problems which require the pilots to do emergency landings.

Unlike tourists who can choose which destination they want to visit (and avoid dangerous ones), cabin crew have to go wherever their roster states, which sometimes include locations where there are situations such as terrorist bombings and mass protests, and adverse weather conditions such as hurricanes and earthquakes.

Above all that, they also have to be careful about theft and robberies when visiting countries with high crime rates.