We have heard of how deadly the coronavirus can be, not just for the elderly, but also in young children and even teenagers.

And in the case for parents of baby boy, Alexander Parsons, they learnt it the hard way through the heartbreaking death of their only child from Kawasaki disease — a rare childhood illness that is possibly linked to Covid-19.

When 8-month-old Alex came down with a high fever, swollen lymph nodes and “a pinprick rash that looked like sunburn”, his mum Kathryn Rowlands thought “it was a viral infection”.

He later became severely ill with “his hands and soles of his feet turned red”.

While Alex’s parents called the NHS to seek help, they were told that “it could be mumps”. However, symptoms worsened with Alex starting to vomit. He was later admitted to the Derriford Hospital in Plymouth.

The next day (April 6), Alex was diagnosed with the Kawasaki disease which primarily affects children under the age of five.

But little did Alex’s parents know that the symptoms could be due to a delayed response from the coronavirus, according to Mirror UK.

The mysterious Kawasaki disease causes blood vessels to become inflamed and swell in the body, causing complications such as “inflammation of the heart”. These are similar symptoms reported from the coronavirus.

When his condition worsened, Alex had to be transferred to Bristol Royal Hospital for Children.

It was said that the staff fought for nearly an hour to revive him but to no avail.

The little warrior passed away on the next night of 25 April from a ruptured aneurysm. He is the youngest known victim of Kawasaki Disease in the UK, according to Mirror UK. 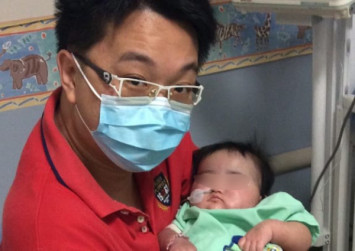 And just two hours before Alex suffered from a ruptured aneurysm, he was “pictured smiling and playing”. He was said to have no underlying health conditions.

“I was about to try to settle him down for bed but he was so upset,” said 29-year-old Kathryn. “He cried in a way I hadn’t heard. I held him and sang to him, then his head went back. He was floppy in my arms.”

“The doctors and nurses who fought to save Alex were incredible – but if they’d known more about the Covid-Kawasaki link, they possibly could have done more,” she said.

The stay-at-home mum also pointed out the urgency in letting the public be aware of this multi-system inflammatory syndrome in children that has led children to become severely ill.

“The Government needs to explore the link between Covid and Kawasaki and get the information out there instead of keeping it quiet.”