Abandoned schools, void decks and a Sentosa hotel: Singaporeans tell us about their first-hand supernatural experiences this Hungry Ghost Month

According to the Chinese lunar calendar, we are now in the midst of the Hungry Ghost Month. Based on Chinese folklore, during this period, the gates of hell are opened, allowing spirits to roam the earth.

As the seventh month comes to an end next Monday (Sept 6), we've rounded up some spine-chilling tales from several Singaporeans that gave us goosebumps. Enjoy them — if you dare.

When I was around seven years old, my parents let my brother and I have our own separate rooms.

One night, a little after I had gotten used to sleeping on my own, I woke up in the middle of the night to see what I thought was my father sitting at the edge of my bed. He wasn't facing me and was looking towards the ground, seemingly in a daze. Habitually, I reached out to him for a hug but just as I was about to touch him, he disappeared.

As a kid, I didn't think much about it and went back to sleep but now, when I look back, the scenario gives me chills.

Was it all just a dream? Or was that figure something else?

Eerie nightmares in a hotel at Sentosa

I checked into a hotel on Sentosa a couple of years back for a staycation. As I was going to my room, I passed by an open staircase in a corner of the hotel which, to me, felt oddly dark and creepy despite personally not being the 'sensitive' sort. But I forgot about it soon after and proceeded to check out the whole place.

It was only a one night stay but that night, I didn't sleep well, which is not the norm. I had a weird dream, and I seldom — if ever — remember my dreams, much less nightmares.

I dreamt that I met my friend in a canteen — it could have been a school tuckshop but in hindsight, it looked like an army canteen — when suddenly, the lights went out. Strangely, all the chattering and noises were silenced too and everything was still, even my friend didn't move or make a sound. I felt a sense of dread when suddenly, I saw all the shadowy heads in the canteen just slowly turn around to silently stare at me.

A few years ago during the Hungry Ghost Festival, I was out till late at a friend's place. I reached home around 3am in the morning.

While waiting for the lift, I happened to see a little kid peeking out from behind a pillar at the void deck looking at me, smiling. Just as I was about to smile back, it suddenly hit me: "It's 3am. Seventh month. Why is there a kid at the void deck?"

All the hairs on my body started to stand, so I looked away as if I didn't see it. When the lift came. I immediately rushed in. I hoped so hard that I wouldn't bump into anything when the door opened. Luckily, I managed to get home safe and sound.

Hearing voices in an abandoned school

I was a student of Fuchun Primary School. The original campus, now commonly known as Old Fuchun Primary School, was around since 1980s until it was finally vacated around 2004, when I was in Primary 5. The school just felt a bit strange during my years there as a kid and many other students had the same experience.

Sometime in 2012, a friend and I explored two abandoned schools. One was somewhere in Jurong West, and the other was… Old Fuchun Primary School.

It was around 2am when we climbed over the fence near the carpark. It was just a normal low fence. I threw my jacket over the top just to make sure we didn't scratch ourselves. A few steps up and we were in. We entered via this one shutter door that had been left open.

We were in total darkness except for the moonlight that was lighting up the place.

At the concourse, where we used to gather after recess before everyone split back to their classrooms, we could see a chair, together with what seemed like Buddhist or Taoist images and prayer items on the table. I remember being a bit confused as to why there'd be so many of these 'spiritual' items there. I wasn't the bravest soul myself so that definitely got me spooked, but my friend had no reaction.

We walked across the concourse, about 30 to 40m, and we were at the classroom block.

Read Also
Hungry Ghost Festival: 9 questions with a paranormal investigator on haunted houses and what homeowners can do 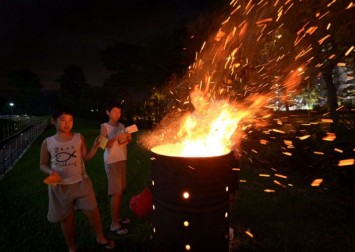 We walked slowly and didn't say anything at all. We continued walking around the block, and we reached back to the concourse.

Once we reached the middle part, we froze in our steps when we heard, "Ding dong... Welcome!"

It was a super creepy girl's voice, from the very top of the concourse.

So we then steadily walked in the darkness back to the one open shutter — at the moment it seemed like it was so far away.

As we walked across the carpark, talking about it, my friend told me he felt someone touch his hand while we were at the classroom block, but I kept telling him it wasn't me.

Around a few weeks later, we decided to go back to investigate the sound, thinking it could be a motion detector. This time, there was a guard there, a semi-bald man who looked about 50.

He told us not to trespass and he was going to show us the way to the gate to leave. But we shared with him what happened when we explored the school the other night.

He said that he's been there since the school was defunct and he's never heard that sound himself. Furthermore, it wouldn't make sense for them to have a motion sensor with a bell sound like that anyway. He didn't look surprised and probably wasn't. He just told us that the school just isn't a good place to be at and escorted us to the gate to leave.