A comforting home to step into at the end of a long day was what homeowner Khai Toh, who’s a design director at Archlab, was working towards while designing his Ang Mo Kio apartment a few years ago. Amidst the whirlwind that was 2020, a familiar home that brings calm is worth its weight in gold.

All he wanted was a home that was “tranquil, monastic and understated – and comfortable”, says Khai. Step into the home and, immediately, a sense of calm takes over.

Five years ago, the Singaporean, who is experienced in architecture and urban design, returned home after 25 years in the US to look after his parents.

His home is a 1,300 sq ft apartment, picked for its size, convenient location, and also the view – it overlooks the neighbourhood park and Bukit Timah Nature Reserve in the distance.

Once he got his keys, Khai launched a complete overhaul of the 40-year-old apartment. He tore down several walls, but left two bedrooms intact – one for guests and the other for himself. A third bedroom was converted into an open space, which doubles as a home office/study and dining room.

He gave expensive materials such as marble a miss in favour of modest concrete, vinyl and plywood. But with his expert touch, the end result is a home that looks several times more expensive than its cost.

“I wanted to bring out the dignity of these materials that no one might bother to,” says Khai, adding that the apartment is also easy to maintain. 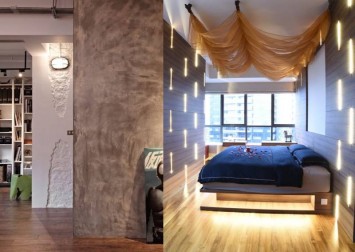 As an interior architect, Khai understands the value of a welcoming entrance. So the first design feature that visitors see is a strip of black and white dotted tiles on the floor, leading from the front door right to the kitchen entrance. From afar, you can easily mistake it for a rug.

Once inside proper, you’re drawn to a light column that separates the living and the dining areas, and surrounded by a bed of stones. The column used to be an eyesore but, unable to knock it down, Khai decided to clad it in frosted glass. When illuminated at night, the column appears like a lantern that glows softly.

His skill at disguising unsightly features is prominent elsewhere. Ugly beams in the kitchen are cleverly tucked behind cabinets, while an intruding pillar in the bathroom is concealed behind a feature wall.

Giant frames around the windows in the living and dining areas look like they’re made from exotic wood, but a closer look reveals well-crafted stained plywood. Besides the aesthetic value, the frames also hide storage spaces and wiring. White curtains help soften the look while allowing natural light to filter in.

When asked if there’s anything American about his apartment, Khai jokingly points to his floor to ceiling bookshelf, filled with books on art, architecture and landscaping.

Like the rest of the home, his bedroom exudes calmness. Khai keeps things simple, using a plywood headboard and a glass panel mounted horizontally as a bedside shelf.

Sharp-eyed visitors will notice that the loose furniture in the apartment all have elegantly thin legs. They not only appear to float, but Khai says that it is a design hack. “Being able to see the floor even when you have lots of furniture instantly makes a space feel bigger.”

Just like his choice of materials, Khai keeps the colour palette simple – mostly shades of white, blue and grey to give the apartment a uniform look. Random pops of colour, such as a mustard cushion, and the yellow backsplash in the kitchen are all carefully orchestrated. To jazz up the home, Khai prefers something more organic, such as plants and flowers.

As homes in Singapore are smaller and more costly compared to the US, local homeowners tend to want to maximise their gross floor area. “But for me, it is more about creating a space that highlights the characteristics of the materials used, and also the human experience.”

This article was first published in The Business Times.