Think you have it bad when Aunt Flo decides to pay a visit?

Before complaining about typical menstrual maladies like cramps, backaches or breakouts, you might want to spare a thought for women who probably have it way worse.

We're talking about the brave ladies who have dedicated themselves to the service of protecting our nation, and part of their training involves roughing it out in the damp jungles of Pulau Tekong.

Already undergoing a programme designed to test their physical and mental limits, those who are suay (unlucky) enough to have their period strike at the same time have no choice but to suck it up and push on.

Picture trudging through muddy grounds, "feeding" mosquitoes and carrying a 10kg field pack in the humid heat of the tropics — all while trying to ignore that squishy sensation in your nether regions.

We reached out to an all-female group of Singapore Armed Forces (SAF) Volunteer Corps members who went through a two-week training course in 2019, on how some of them survived their menses in the wilderness with no proper toilet, running water and rubbish bins. Most of them asked to remain anonymous for this interview.

What do you do when you're stuck in a jungle without a toilet? Build one, of course. 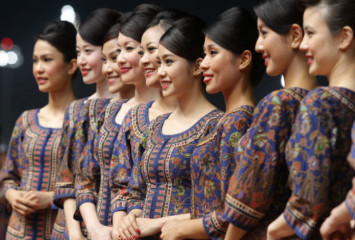 During the three days spent outfield, the recruits we spoke to were taught to build an outhouse from scratch and given only 10 minutes to do it with planks of wood and shovels provided.

If it is not completed within the allocated timing, more work would have to be done in between short breaks given, "so if the toilet haven't finished making then that's it lor [sic]," said Seetoh Suying, 30.

In addition to the risks of exposing your bare bottom if the "toilet" collapses, recruits have to take care not to step on the mess left by previous users while attempting to clean themselves up with wet wipes.

However, trash (like used wipes and soiled pads) cannot be disposed of or buried in the jungle because they cannot decompose and "it's damn gross if someone digs them up by accident", so they'll have to be carried around until recruits are let off the island.

This means that those on their periods can spend days carrying bloodied pads, wipes and tissues in resealable plastic bags (blacked out with tape) kept within their field packs.

Passing through the rites of puberty to become a woman, many girls experiencing their periods will no doubt have worried about embarrassing stains and smells that come from having "the time of the month".

When placed in difficult environments and forced to adapt quickly under pressure, it's no wonder that embarrassment and body image issues no longer become a priority.

From the get-go, everyone is forced to make friends in their section, and this comes in especially handy when you might have to strip naked (to change out of your uniform) in front of someone you just met.

The ladies revealed that they are usually only given three minutes to change their panties and pads in the tonner (army vehicle), and everyone is usually too tired to even care about being stark naked in front of others.

Sometimes (especially if it rains for days), recruits have to do PT (physical training) in the worst conditions — and they only get the green light to change their pads once at night.

"Won't the pad be soaked with muddy water?" we asked, already picturing what it's like to suffer through a UTI (urinary tract infection) in the jungle.

"Do you think they care?" said Seetoh lightheartedly.

"As much as you'll kena tekan (be put through the wringer), the officers are not inhumane and won't torture you because of something you can't help," she clarified.

"The ladies who sign on as regulars, they're really garang (fearless); their mindset is different [from civilians]," she continued.

"IN TIMES OF WAR AND I NEED TO FIGHT, THEN HOW?"

As someone whose industry is dominated by men, one female army regular told us she literally has bigger battles to fight than her monthly periods. We've given her anonymity as she's not authorised to speak to us.

When asked how she copes with the common symptoms of menstruation like PMS (premenstrual syndrome), bloatedness and cramps, here's what she had to say.

"In times of war, if I need to fight then how? Sit down and feel bad about life or continue to fight? I depend on Panadol to survive on a monthly basis.

"Sometimes [the pain] can be quite bad till I'll squat on the floor and feel like vomiting all the time, but life goes on. I still need to be strong to conduct my lessons and look out for my men and trainees," she said.

When the pain gets too much, she'll inform her superiors ("in case they think I'm having a heart attack or something") but conceded that this only fuels her want to be stronger since "it shouldn't be an excuse to skip training".

Ever considered a military career but are worried about biological challenges like your period happening during training? Here's a piece of advice from the army regular.

"If they are afraid (of things like their period), then don't come in [to the army]. The reason to sign on should be far greater than that and won't deter them from signing on.

"Period cramps aren't something that anyone can control. [If] you keep trying to push on but can't, you'll still be respected," she said.

Another lady who has been through training suggested taking medication to delay one's period because "menses during Tekong days is very leh chey (troublesome)".

Responses have been edited for clarity.