Artist behind the art: His passion for drumming and art meet on the canvas

Do you like your art messy and chaotic? Then Playnting (playing and painting) might be the perfect art therapy for you.

This art technique is essentially painting by playing drumsticks, and is the brainchild of 24-year-old artist Khairul Anwar Fazlur.

The self-taught drummer wanted to marry his love for music, visual arts and theatre, and found that by dipping his drumsticks into paint and creating rhythmic patterns across the canvas, the process allowed him to create visual pieces that were stunning and spontaneous.

We speak to the talented thespian to find out more about this exciting new art form, what inspired his innovation, and how it acts as a form of therapy for those with special needs as well as the community in general.

Tell us about your journey in both disciplines. How did drumming as well as painting come into your life? Can you remember which came first?

Painting definitely came first — I've been painting since I was a toddler; I was either two or three years old. My mum, Su'ad Binte Ahmad, was artistically-inclined, and enabled me to do art at a young age.

I was very imaginative and had a huge love for dinosaurs, so most if not all of my works then were inspired by them. When I was six, I made an encyclopaedia of dinosaurs — it was a scrap book in which I drew 38 dinosaurs that were each named and coloured.

However, I stopped painting around the age of seven and focussed more on drawing, before starting to paint again in 2016 when I joined Saint Joseph's Institution International (SJII).

I was taking Higher Level Visual Arts for the International Baccalaureate (IB) and was urged by my two Visual Arts teachers, Samantha Higgins and James Ingram, to take up painting.

I was afraid of painting because I had so many mental blocks such as "the paint will seep through the paper and tear" or "it's so hard to control the paint and strokes" etc. But my teachers told me to paint big - my very first painting was 150cm by 95cm in size.

I ended up loving painting — all I needed was a push from my teachers. I owe them my gratitude.

What inspired you to combine both art forms, and how did you come up with Playnting?

I have three main inspirations regarding the concept of "playnting".

The first and most pivotal is [Japanese artist] Ushio Shinohara. I mentioned before that I started painting in 2016 because in Higher Level Visual Arts, we also needed to conduct research on artists who inspire us.

One day in 2016, I came across Shinohara who paints with boxing gloves — each strike he makes is the stroke in which paint is applied onto the canvas and visualised. What is visualised is simple yet profound.

The second inspiration is Jackson Pollock who dripped paint onto his canvas. He would paint on the floor and walk around throwing paint at different angles to make his pieces. 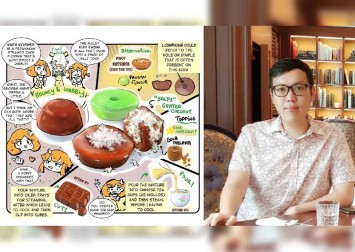 In Playnting, we do the same and work in a similarly dynamic manner. As you work from different angles, you're engaging in an acrobatic and gestural activity.

One can view this as the product being in the process rather than as a finished work. It's how he made it which was the art. I studied Pollock and worked in a similar manner to him when creating my art.

The third inspiration is Claude Monet who wanted to capture the very moment the sun or the moon bathed objects in different types of light. A subjective (as compared to objective) portrayal of what he perceived made his work very unique and true to himself.

All three combined creates the basic framework for the ideology of Playnting before I add my own aspects, which would primarily be music.

On the surface, Playnting is just drumming to a song, and each stroke of the drumstick would eventually reveal the visualisation of that song.

However, interwoven throughout are the Playnting artist' feelings and energy too. I feel Playnting is very unique, personal and sensual - not only to me but for others who have tried Playnting too.

How was the experience showcasing your art style on stage as well as overseas in Berlin?

That entire trip wasn't possible if not for my dad, Fazlur Rahman bin Kamsani. He had met the event organiser through a business conference, and showed him my art — the rest was history!

The experience was truly surreal. To think I'd be performing in Berlin just 10 months after inventing Playnting.

I was very nervous as I had to do a "live" performance in front of a few hundred people but as with all my other performances, once the music starts playing, I enter what I would call "Zen mode", where I can attune my internal vibrations with the frequency of the music, which propels me into a hyper-focused state of oneness.

All that fear and doubt disappear. I don't see the crowd at all. All I see is the canvas, the paint, and my drumsticks.

It's as if I entered the canvas, and akin to the creation of the heavens by God, I became the sole influence of authority with executive decision over all creation within the confines of the universe of the canvas.

Once the performance ended, I was brought back to "reality", and was given a standing ovation. The feeling was indescribable.

What are some of the artworks created by Playnting that you're proudest of?

There are four paintings I did recently which I would deem to be the ones I'm proudest of. The first consists of two paintings which form a diptych, and come as a set.

Combined, I call the work Civil War, as one half of the painting is Iron Man whereas the other is Captain America.

Of particular interest is the Iron Man painting, as I dismantled and recycled my old electronic devices such as laptops to construct his suit of armour. Together, they are my largest paintings to date spanning 183cm by 122cm.

The other two paintings were made this year and are linked to each other in my new experimental approach of incorporating official Marvel comic book and comic book panels along with authentic metal blades to create multi-dimensional Marvel-character art. One is Wolverine and the other is Logan.

For Wolverine, I used Playnting to create his raw and dynamic form before touching up with paint for the purpose of refinement.

This piece presents the chronology of his major appearances in Marvel comic books while capturing the dynamism and ferocity of Wolverine.

The Logan painting took it a step further and used actual panels and strips from Official Marvel Savage Wolverine comic books to add greater immersion and dimension to the art.

Playnting was used to portray the viscosity and texture of blood evident in the intended chaotic splashes across the painting.

We understand that you conduct Playnting lessons as well. What can participants expect?

I currently have two classes available.

The first is the art jam where, for 60 minutes, you listen to your favourite tunes and Playnt with drumsticks on paper and canvas.

It's all about self-discovery where the participant will explore in their own way how to use a drumstick to paint — very little guidance on my part. Participants are highly recommended to bring their own Spotify playlist so I can play their favourite songs as they Playnt.

They will then take home their very own pair of drumsticks, all paper trials and one canvas along with photos and videos that I will take.

This class is great for couples, families, friends, and corporate team-bonding. Essentially: Playnt with your loved ones to your favourite songs and visualise all that you feel!

The second class is the masterclass for those who want to learn the theory and practical aspect behind Playnting before applying what they've learnt on canvas. There will be artistic, spiritual and scientific theories which participants will learn too.

Other things they'll pick up: Colour theory and application, basic drum beats, feeling music and channeling your energy to create, and visualising your emotions by painting with drumsticks. All of these will be taught by me.

Playnting is therapeutic and a great stress reliever.

The classes will help to unravel your subconscious mind and improve creativity while creating an awesome bonding experience with loved ones. Lastly, it's a whole lotta fun, chaos and madness!

What do you hope to achieve from your artistic journey and how do you think Playnting can grow and contribute to the arts community going forward?

Ultimately with my artistic journey I hope to launch and spearhead a new art movement of multisensory engagement which is very holistic and humane.

A movement to show that everyone is indeed creative and to also raise mental health awareness where Playnting is very effective in stress-relief as well as portraying what your feelings and thoughts are.

I have done classes with those with special needs, and basically people from all age groups and backgrounds, and have concluded that Playnting really is for everyone.

I really think that Playnting can do wonders for the community as it is a form of painting which is communal. Going to an art cafe or just painting in general is often thought of as an individual task where we are all in our own little bubble, disconnected from one another.

But with Playnting, it's the exact opposite. It breaks those bubbles and connects people. It's very communal — the more people involved, the more fun and greater the art created! It's honestly a party if there are enough people.

I really wish to launch Singapore onto the global art scene with Playnting. I hope to be remembered just like Van Gogh, Monet and Pollock; all individuals who have started their own movements and evolved art.