AsiaOne Tries: Is getting an 'invisible' tattoo worth it?

Follow host and actress Amanda Chaang as she embarks on a journey to become the most ‘influential’ millennial in our new series, AsiaOne Tries.

You've probably seen them all over Instagram — those tattoos that are practically invisible but glow vibrantly under a black light.

While having tattoos that light up may seem like something out of a sci-fi film, they are very real. In fact, they've been around for decades, Alecs Khoo, the owner of Alive Tattoo Studio tells us.

In a nutshell, these ultraviolet (UV) tattoos are done with a special ink that fluoresces under a black light and can be virtually undetectable in natural light.

Why get a tattoo that can't be seen? How is it different from a regular tattoo? We tag along as artiste Amanda Chaang, 31, gets her first UV tattoo from Alecs.

Wearing her heart on… her ankle?

Naturally, the first order of business is to decide on a design and its placement.

Amanda tells us candidly that she'd originally wanted to ink her husband's name, but decided against it on the morning of her appointment.

"I woke up and something just didn't feel right," she explains. "And I think we should always go with our gut and also try not to brand ourselves, even with our partner's names."

Alecs concurs, adding that getting a tattoo of your partner's name is "really unwise" as "tattoos last longer than romance".

He cites some clients of his who got matching tattoos after being together for 40 years, only to end up getting a divorce not long after. The superstition seems to ring true even if your tattoo is invisible, we gather.

Amanda eventually settles on getting the words "good girl" on her ankle after some input from Alecs.

UV tattoos can have more noticeable fading as they aren't as dark as black ink tattoos to begin with, so choosing a spot that doesn't get much sun and movement can help keep them in tip top condition, says Alecs.

After spending a good 15 minutes selecting a font and turning it into a stencil, it's time for the main event — the inking.

Quick, but not painless

Amanda's no stranger to tattoos — she got her first one at 16 — but she says that the pain from an ankle tattoo is a little more than she'd expected.

Nevertheless, she's a trooper, sitting through the session without a peep. Fortunately, it's all over in a matter of minutes.

"Is it bad to say that I really enjoyed it?" She asks with a laugh after emerging from the tattoo shop.

Of course, we have to check out the final result under black light. Sure enough, the design glows a bright neon colour even under a small handheld torch.

While she shows off her new party trick, Amanda gives us her final thoughts: "I wanted something really simple, fuss free, nothing too much of an overstatement. It's just there, and it's fun. I'm very happy I did it."

As for whether she's planning on getting more, she tells us she's not getting any new black ink tattoos "for the time being".

"But a UV tattoo is a good alternative for now."

What you need to know about getting a UV tattoo

Thinking of getting a UV tattoo of your own? Alecs, who has 22 years of experience as a tattoo artist, tells us everything you should know before you get inked.

Why do people get UV tattoos?

For many, it's the thrill of having a tattoo hidden in plain sight, Alecs says. "They want to get a tattoo in the more obvious places, but yet they want to be able to hide it."

In fact, he's gotten "quite a few" requests for UV tattoos on the face.

"The interesting thing is they totally have zero tattoos but the first one is on the face. As for the design, the most common ones are stars and tear drops."

But a tear drop tattoo carries the connotation that you've been to prison, Alecs warns. 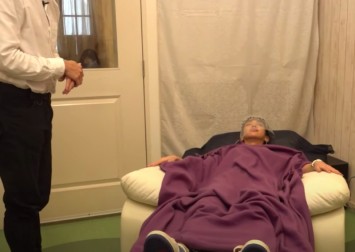 And then there are those who choose to add UV embellishments to their existing tattoos. For example, those with flame tattoos often choose to add red and orange accents.

Not really, Alecs says. "Actually the application is the same as a normal tattoo. The only difference is that the ink we use [for UV tattoos] is reactive under black light, so it will glow as long as you're under a black light."

While UV tattoos are perfectly safe when done with ink certified for tattoo usage, they shouldn't be confused with glow-in-the-dark tattoos, which can be "very harmful", Alecs is careful to add.

"There are people who I know who actually get their ink from unsafe sources. I know of someone who actually used a lightstick – they literally break it and use the fluid inside. There have been very bad reactions to this."

What about the cost?

Or course, cost can vary based on the size and the design, but UV tattoos are generally more expensive than those done with regular ink

According to Alecs, only a select few companies produce UV ink that's certified for tattoo usage, and they cost "quite a premium" to import.

Will it be visible when I'm in the club?

"It depends on how strong the light is. For some clubs their ceiling is quite high, so the UV light is very high up so it won't be as attractive as when you're nearer to it," Alecs says.

Are all UV inks really invisible once on the skin?

Alecs has a selection of different UV inks, including white, yellow, green, orange and red. But it turns out that only white UV ink is truly invisible under regular lighting conditions.

"The other colours will be visible under normal light. The brightest one is the yellow. And the most popular ones, I would say, are the yellow and the red."