Every morning, Leong Yuet Meng would wake up at 4am to go marketing for ingredients to make her wanton noodles and other dishes that are sold at Nam Seng Noodle House.

Despite being 91 and having a team of helpers at her stall, she would be very hands-on, she shared in the programme, Belly of A Nation. "Everyone must cooperate when you work. Don't always rely on others when working," Leong said, and she led by example, making wontons from scratch daily.

However, this routine came to an end in July and fans of her dishes will no longer be able to get them from her stall as the outlet in Far East Square has shuttered.

But once the government allowed food and beverage businesses to open again, she leapt back into action. "I did so immediately, even if it was just to meet people," Leong shared. 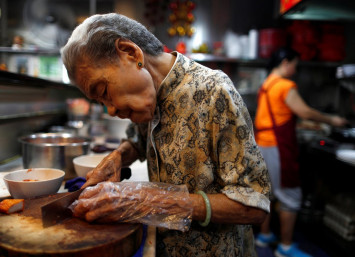 However, the footfall was no longer like before as most people were working from home and business "dropped drastically overnight". "It's very hard to get back to where we were before," she said about what business was like post-circuit breaker.

In July, she made the decision to close her stall. Other than slow business, she lamented that her shop's lease was also an issue. "Who knew that [the building management] would change this year and become difficult to talk to?"

Leong also shared that one of her workers went back to China, another went to work at her brother's store, while the last one decided to take a break from working.

But the feisty woman is not willing to give up and promises that Nam Seng Noodle House will be back again.

👵🏻 A Message from Ah Poh Dear Nam Seng Customers, 🏠 WE ARE LOOKING FOR A NEW HOME! 😞 We regret to inform you that we...

"I will return to work. I can't bear to leave my customers after they have treated me so well," she shared, adding that it is hard to let go of her business after dedicating the past 60 years to it.

"We will find a new place and we will make a comeback."