Cloud light DIY: What not to do

DIY projects can be a fun thing to do with your children during the holidays, and some of them can actually end up looking really good in the home, such as plant terrariums, hand-knitted doily coasters or even a handmade clay mug.

However, one netizen found out the hard way why inexperienced DIY-ers should not experiment with electrical projects.

Facebook user Faris Hakimi initially wanted to create a Cloud Light to enhance the mood in his bedroom.

We’ve all seen these cool pendant lamps before, they resembled fluffy clouds hovering above the head in restaurants and cafes. These lights are essentially tubes or strips of LED nodes covered in tufts of cotton, wool or fibrefill.

Unfortunately for Faris, he didn’t realise that instead of using an LED strip, he ended up using conventional incandescent Christmas lights instead.

There’s a huge difference between the two – LED strips use much less energy and thus do not emit as much heat as incandescent bulbs. It’s easy to tell whether the Christmas lights you have at home are made with LED or incandescent bulbs because the latter generates a lot of heat while in operation. 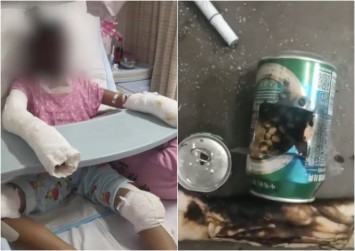 In fact, the US Fire Department reports that there are an average of 160 cases of fire caused by incandescent Christmas lights during each festive season, and makers of incandescent fairy lights advise users not to keep the lights on throughout the night in case of fire.

In Faris’ case, he unknowingly taped the string of incandescent fairy lights along the wall of his bedroom before covering it with cotton.

Now unlike wool and polyester fibrefill (which are fire-retardant), wool is highly flammable. Below was the scene he woke up to in the middle of the night…

In his post, Faros noted in malay, “Destroyed in the blink of an eye -.-”

Thankfully, the flames were quickly put out and no one was hurt. But here is the TL:DR takeaway from his experience:

Below are other safer DIY projects you can try out with your family as well!