SINGAPORE - Native to South-east Asia and originally cultivated in large quantities in China and Japan, mandarin oranges spread further around the world only from the early 19th century.

They have since become so widely and successfully grown that mandarin varieties and hybrids together form the largest group in the citrus genus.

The mandarin orange is considered a chief citrus species, along with the pomelo and the citron. Almost all other commonly eaten citrus fruits, including regular oranges and lemons, are descendants of these three and their hybrids.

Mandarins are important during Chinese New Year for several reasons.

Many mandarin types are at their seasonal best between mid-winter and mid-spring, when the New Year falls.

Their round shape and golden colour are also considered auspicious, symbolising wealth and good fortune; and they are conveniently sized for giving and eating.

Keep mandarins away from dampness and high temperatures. Discard any wrappings that can trap moisture and place the fruit in a shallow woven basket or container that allows for some air circulation. Avoid using a deep container and try not to stack the mandarins too high, as this hinders air circulation.

Go over all the fruit at least once a day to check for incipient soft, bruised or brown spots, which can deteriorate quickly, and remove any blemished ones. 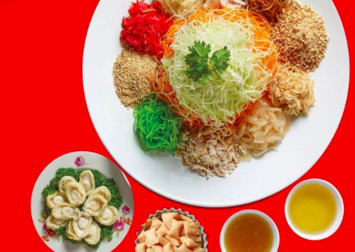 You can also store mandarins loosely packed in paper bags in the fridge vegetable drawer, but check their condition every couple of days.

Some of the ornamental potted plants sold at Chinese New Year bear fruit which resemble tangerines or clementines.

Likely hybrids of calamansi, mandarin and other small citrus, the plants are often developed and grown for looks rather than taste, and may have been treated with pesticides.

So never assume they are edible. Always check with the vendor if they can be eaten.

Here is a guide to the many different mandarin kinds sold at supermarkets and wet markets during Chinese New Year.

You'll be bowled over by the many varieties of Mandarin oranges. http://str.sg/WDy

Posted by The Straits Times Food on Tuesday, December 27, 2016

These mandarins are 7 to 8cm across and plump. They are perhaps the most popular Chinese New Year mandarin orange as they combine a generous size with a succulent, juicy texture and a flavour that is sweet, vibrant and tangy.

Yet, they are not so concentrated that you cannot eat a few at a time. The skin peels off easily.

They are similar in size to ponkans and have slightly rough, loose skin with a few wrinkles. They are also easy to peel.
Good ones have a bright acidity and can be quite sweet, although overall, they have a milder flavour than ponkans.
Like ponkans, their zest is fragrant but can be too soft and bitter to be useful in cooking.

About the same size as lukans and ponkans, and also from southern China as their name suggests, these mandarins have rougher, thicker skin which is harder to peel, chewier internal membranes and a less sweet taste.
What they lack in finesse, they make up for in durability. They have a longer shelf life than many other mandarins and can last two to three weeks.

From Pakistan, these are also 7 to 8cm across, slightly squat in shape, with smooth, shiny and clingy skins and many seeds.
When perfectly ripe, they are intensely sharp-sweet and full-flavoured.
Eating more than one at a time may be overkill. Their ample juice and aromatic zest are good for making drinks and cocktails, and for cooking and baking.

These small mandarins are 5 to 7cm across and are very refreshing, with a light acidity and floral sweetness.
A cinch to peel, they are also very juicy and seedless. In the United Kingdom, where they are mainly enjoyed at Christmas, they are called satsumas, after the name of a citrus-growing region in Kagoshima.
Mikan mandarins are a speciality of some Japanese prefectures, such as Wakayama and Ehime, as well as of Korea's Jeju Island.

Bred from mandarin varieties cultivated in the Mediterranean region, these look like large tangerines or small mikans.

They are distinctly more tart than either of those, easy to peel, quite juicy and seedless. As they are often imported from Europe, they can be expensive.

This mandarin-tangerine-pomelo cross from the United States is the size of a grapefruit, with thin, clingy yellow-green skin and lots of seeds.
Very sweet and abundantly juicy, it has a flavour halfway between pomelo and grapefruit, and a lingering but quite pleasant faint bitterness.
These citrus fruit are called "cocktail grapefruit" by some producers. They are also good for making marmalade.

The offspring of various crosses among orange, mikan and ponkan, these expensive fruit appear in Japanese supermarkets around this time of year.
Called hallabongs in Korea, they are another Jeju Island speciality. As large as navel oranges, they have rough skin and a prominent "nipple".They have a light but complex fragrance, no seeds and fat sacs. Their flavour is so concentrated and sugary-tart and juicy that they are practically a soft drink in fruit form.

They are thought to originate from the US and those sold here are usually grown in Australia or China.
About 9cm wide, they are plump, with clingy but thin skin and a few seeds.
Very juicy, they are moderately sweet, low-acid and sometimes blandNote that the word "honey" is applied to this and other citrus varieties more for marketing purposes than because they actually taste like honey.

They are occasionally seen in gourmet supermarkets in December and January.
In Japanese culture, they symbolise continuity and family inheritance in New Year celebrations.
About 7cm, yellow to deep orange in hue, they are also known as Seville oranges in the West.This pomelo-mandarin cross has a very old pedigree and history of cultivation.Traditionally used for making marmalade, confections, liqueurs, extracts and perfumes, it is not typically eaten raw as it has extremely sour juice, many seeds and membranes, and a tough, bitter, deeply fragrant rind.

The name "tangerine" originally referred to mandarins associated with Tangiers in North Africa, but its usage since has had more to do with public relations than botanical relations.
The China tangerines sold here are sometimes confusingly labelled "baby oranges", which they are not. They are 4 to 5cm wide, with glossy, rough skins.
Tangerines are often packed along with some green leaves, which symbolise strong relationships between the giver and the recipient. Densely sweet, low-acid tangerines have a short aftertaste and few or no seeds.
This article was first published in The Straits Times. Permission required for reproduction.
#Lifestyle #fruit #Chinese New Year