Confessions of a new mum: Here's why I think breastfeeding sucks

When we had our daughter, my decision to breastfeed was part nutritional, part laziness. Formula sounded like a hassle, and I didn’t want to prepare bottles at 4am in the morning. I thought if my body could do it, I would breastfeed, after all, like all new mothers, I had been told breast is best.

Pre-baby, I believed the difficulty with breastfeeding was just about whether you could do it or not. Friends said not to pressure myself if I couldn’t, and so I thought it was literally a case of “can or cannot”. After giving birth, I realised that, if you can breastfeed, your difficulties begin – not end – there.

Breastfeeding is like learning to climb a mountain in the dark in high heels. You give birth to this tiny creature, wholly dependent on your good sense for survival, and then three or four days later you bring that baby home, everyone just assumes you will automatically know how to keep it alive.

At the beginning, newborns need to feed every three hours or so, but having a schedule isn’t enough. When it comes to breastfeeding, there’s also what positions suit your baby best (do you hold it like a football? Or in a cradle? Or in something called the reverse cradle?) and of course, there’s the all-important latch – because if the baby hasn’t latched well, it won’t drink well, which defeats the whole purpose.

Newborns are also very sleepy creatures, and trying to feed one that just wants to sleep can also affect how they eat. So basically what you’re trying to do (while suffering from a lack of sleep yourself) is balance a feeding plan with a nap schedule all the while dealing with latching and the actual physical pain of having your milk come in – it’s a lot to ask of someone.

Another thing I hadn’t known pre-baby was that an oversupply of milk can be just as stressful as a lack of supply. While some people might say that’s “too much of a good thing,” for me, that meant milk was literally everywhere. It would shoot out when my baby tried to feed, or spray out in the shower, and again when I tried to get dressed.

I would wake up drenched in both milk and hormone-fuelled sweat. If my husband gave the baby a bottle of expressed milk, I’d still have to get up and pump because otherwise I’d leak through my pyjamas. And it made it hard for my baby to gain weight, which added to the stress.

Now, after 12 months of breastfeeding, I’m happy to say I’ve reached my goal of breastfeeding for a year. While I’m glad that we made it this far, I don’t think I’ll continue much longer. 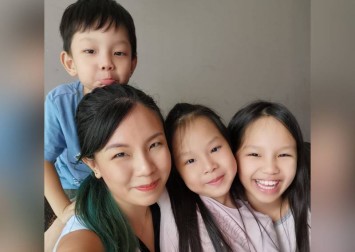 Breastfeeding wasn’t instinctive for me. I’ve heard of mothers who can breastfeed a baby in a carrier, while climbing said mountain, or who lie down and catch some zzzs while baby helps themselves to a snack – but I not one of them.

For the last 12 months I’ve sat rigidly on the couch with a pillow on my back, clutching my baby in a cradle (or reverse cradle, who knows) on a nursing pillow while she feeds. I’m not comfortable breastfeeding her on-the-go, and to be honest, she seems just as happy taking milk from a sippy cup as she is from a boob.

My daughter is healthy and thriving, and I don’t think our bond is built on breastfeeding alone. I’m glad I did it because she gets the best nutrients I can provide, but if that had to come from formula and not breastmilk, I don’t think she would have been any worse off.

Now, having been prepped by the whole breastfeeding experience, I am semi-ready to tackle weaning. I have heard that it can also be an emotional, hormonal rollercoaster ride (as an example, I have read that you can both lose your appetite or eat non-stop when you stop breastfeeding, joy), and I am not looking forward to the rock-hard boobs that are the result of the baby emptying the breast less.

But I do look forward to bonding with my baby without being a food source and I can always look back and know that for a year, I provided her with her main source of nutrition in the best way I knew how.

This article was first published in The Singapore Women's Weekly.