SINGAPORE - To this day, national hockey player Ishwarpal Singh Grewal still vividly recalls returning home as a tearful 15-year-old, dreading to tell his father that he had failed to make the school's hockey team.

His late father,  former news editor at The New Paper and Straits Times journalist Santokh Singh, had been a passionate sportsman who was deeply invested in his progress as an athlete. But when the older man received the bad news, he simply told his son to watch as he threw a ball onto the floor.

"The ball hit the floor and bounced back higher than where it was. That was the first time he taught me this lesson that stuck with me for the rest of my life: It's not about how you fall, it's about how high you bounce back," Dr Singh told young graduates at an annual Sikh Graduates Tea on Sunday (Oct 13). 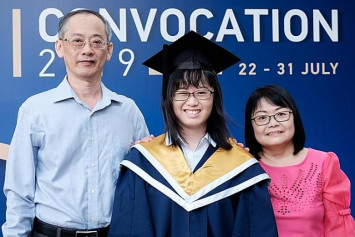 "Through my career as an athlete, I've had a lot of failures," he said. "I have been benched for important games, lost finals, made decisions that have caused the team to lose. All along the way, I always remembered to bounce back."

"This lesson is something that can make a big difference to our day-to-day lives," he said, adding that he did not make it into medical school on the first try either.

At the event by the Young Sikh Association, around 30 youth from Institutes of Technical Education, polytechnics and universities were recognised for their academic achievements. Dr Singh, who graduated with a degree in medicine and surgery, was invited to speak as valedictorian.

He told The Straits Times that resilience was a value instilled in him from a young age.

He grew up on sports stories at home and started playing hockey at a void deck with his father and siblings at the age of five or six, before training in Raffles Institution where he studied. But he began playing on the national team only when he was 19.

"Many times, I had not been selected to teams. I've never played for the national team in any age group, only as an adult," added Dr Singh, who has since represented Singapore in three SEA Games.

"Without resilience, I don't think any of this would have been possible," he said, noting that this is a value important to the young generation today as well.

Senior Minister of State for Defence and Foreign Affairs Maliki Osman, who spoke at the event, also urged young graduates to recognise that success is reaped through the experience of managing failures and overcoming challenges.

He asked the youth to be open and ready to step out of their comfort zones: "Asean and the larger Asia must be seen as our economic hinterland."

Singapore is multi-racial and multi-religious society, he said, adding: "Differences will always be highlighted. Although we can't take away those differences, we can focus a lot more on the similarities."