It’s a sad day for DC fans in Singapore as one of the only DC-themed cafe in Singapore, the DC Super Heroes Cafe in Marina Bay Sands has announced that it will be closing its shutters for good and will not be making a comeback once phase 2 of circuit breaker measures arrives on June 19.

On its Facebook post announcing the news, the cafe stated that it had a “super-fun, wonderful and memorable 5 years”, and it thanks past customers for their incredible support over the past few years.

It's been a super-fun, wonderful and memorable 5 years! However, all good things must come to an end. As we have ended...

Several customers have left comments on the post, some expressing their disbelief while others thanked the DC cafe in return for giving them a chance to dine “with the greatest”.

Over the past five years, the DC Cafe served as a space for fans of the DC comics and movie franchise to hang out and have a meal while being surrounded by some of their favourite superheroes such as Batman and Superman.

It was also used as a place where organisers could hold DC related events such as the Injustice 2 Tournament back in 2017. 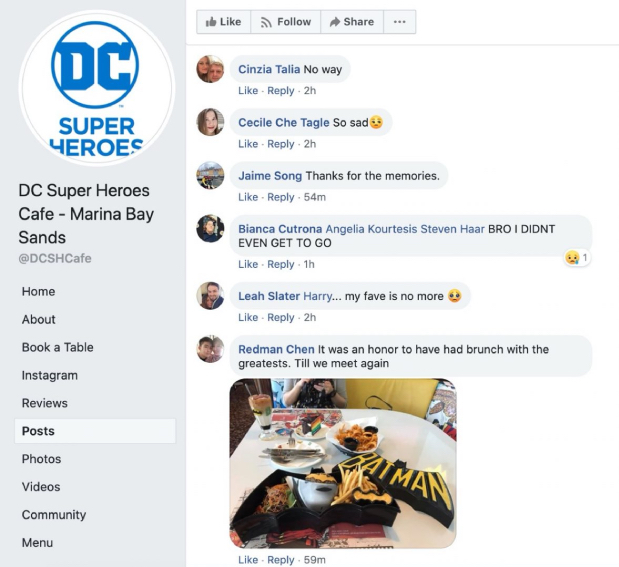 Fortunately, the DC Super Heroes Cafe in Takashimaya will continue to run and the Facebook post confirmed that it will be reopening come phase 2 on June 19.

Though it adds that the Takashimaya branch will be transitioning to a new brand in the near future.