Ever since menstrual cups gained popularity over the last couple of years, many women had been swapping their pads and tampons for this life-changing device.

And now, there’s a new alternative that might just one-up the cup. It’s the menstrual disc, and unlike the cup, you can have mess-free period sex with it in.

Reviews are pretty mixed though. While around half the reviews online swear by the menstrual disc, saying that it’s convenient and life-changing, the other half shun it and say it’s too difficult and uncomfortable to use.

We think responses are so varied because the disc is not for everyone. Different people have different preferences and anatomies. So how do you know if it will be a good fit for you?

Read this list of questions and answers about menstrual discs, and hopefully, it will help you make an informed choice about buying one. Scroll down to check it out.

WHAT IS A MENSTRUAL DISC? 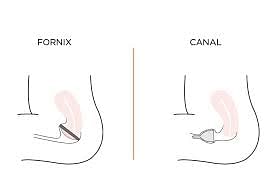 Functionally, a disc performs similarly to a menstrual cup, but in terms of shape, size, and insertion method, it’s very different.

As you can see in the picture above, the disc (left) sits all the way up, right under your cervix, but a cup stays lodged in your vaginal canal. Some similarities between the cup and disc are that you won’t feel them when they’re fully inserted, and you can keep them in for up to 12 hours without leakage, depending on how heavy your flow is.

One glaring difference is that the disc has to be pulled out horizontally when you remove it and since the disc is malleable and relatively shallow, there’s probably going to be some spillage.

On the other hand, the cup has a fairly clean removal as the flow tends to be contained within the cup. We think the clean-up can be a deal-breaker for some, but for others who would love to have mess-free period sex, this con is just a small trade-off.

IS IT SAFE? IS THERE A RISK OF TOXIC SHOCK SYNDROME (TSS)? OR MIGHT I LOSE IT INSIDE ME?

As for TSS, anything inserted into the vagina has a small risk of it. It could happen with tampons, cups, and discs.

The risk is very tiny though, and experts from the American National Organization for Rare Disorders estimate that TSS related to tampon use occurs in about 1 in 100,000 menstruating women. That is a 0.00001% chance of contracting it.

And as for losing it inside of you, it’s not possible for that to happen because of the way our bodies are shaped. It will be up there – it’s just a matter of how high up.

If you have a very high cervix and you’re not able to feel it when you insert your fingers, then a disc may not be for you. We say this because when you have a high cervix, chances are your fingers are not long enough to retrieve it by simply reaching up, and you might need to try squatting, bearing down or keeping a leg propped on the toilet in order to get the disc.

So we would recommend checking if you’re able to feel your cervix before choosing to buy a disc.

Your cervix should feel like the tip of your nose – firm but a little soft, with a dimple in the centre. It actually moves up and down depending on the stage of the menstrual cycle you’re in. Check for it when you’re menstruating, that’s when it’ll be positioned low.

HOW DO YOU EVEN PUT IT IN?

When it’s not compressed, the disc might look pretty big, like a huge circle. However, if you squeeze it, it can be as narrow as a tampon.

An instructional video by the people behind Ziggy Cup, on how to use menstrual discs.

To insert, you sit down, squeeze it and slide it in horizontally. Then right before it’s fully inserted, you’d have to push the tip in with your finger and tuck it upwards till it feels secure.

When explaining the process with words, it sounds bizarrely difficult to navigate and do, but it’s surprisingly easy when you actually do it, according to many reviewers on Amazon.

Play the video above to see how straightforward insertion can be. It gets difficult only if you’re tense, so you have to remember to relax.

HOW DO I REMOVE IT?

According to most reviewers, removal is tricky, especially when it’s the first time.

Theoretically, you’re meant to stick a fingertip in till you feel the band of the disc, then hook your finger under it and slide it out. The issue with this is that it is highly likely to get messy, especially when your flow is heavy. So bring some wipes, or remove it only at home.

Some people recommend removing the disc halfway to tip out the contents before pushing it back in, so you don’t have to go through a messy ordeal when outside.

That’s one compromise, but we’d prefer sticking to tampons, pads or cups if it gets that messy during heavy flow.

HOW LONG CAN I KEEP IT IN? IS THERE A CHANCE IT MIGHT LEAK?

Thank you to everyone who participated in our giveaway! We're excited to announce our 3 lucky winners: @jaagirl10 @ainsleybaggott and @_justmaya_ who will be receiving 1 month of Flex for FREE and we want to share the gift of a better period with all of you so, we're also sharing a special 10% off discount code for the Starter Kit: JUNEGIVEAWAY10 - code is active through Sunday June 30th. ENJOY! ✨

On low flow, you could keep it in for up to 12 hours, and in the worst heavy flow scenarios, be prepared to empty the disc every 2-3 hours. There is a chance of leakage when your flow is high, and it’s recommended to put a pad or liner in place as a precaution.

Also, depending on your body type, the disc may budge a little when you use the bathroom. If you have that problem, you’ll realise it causes leakages. So it’s good practice to check and tuck it back in place after each time you use the toilet.

HOW MUCH CAN IT HOLD?

This varies from brand to brand. Theoretically, because of the size of the discs, they are able to hold more volume. Practically, when inside your body, the discs will mould according to the shape of your anatomy and might not be able to hold the full volume. So just keep that in mind when estimating when to remove the disc.

HOW DO YOU CLEAN IT?

How do you clean your cup? I prefer to boil mine for 5 minutes just before my period starts and just give it a good rinse at the end of my period. * * WARNING: do not put a hot cup in your #vagina. #triedit #burnedit * * #tbt #menstrualcup #menstrualcupskenya #menstrualcups #rumps #reusable #periods #organicup #intimina #ziggycup #meluna #melunacup #lenacup #rubycup

For heavy-duty sterilisation, you could boil it in water for several minutes. Be sure to check the manual for specific instructions on timing. And for subsequent uses, you could wash it in water and hand soap.

Here is where the menstrual disc shines. With a cup, the stem would hurt your partner during penetrative sex. The disc, however, with its thin delicate and soft material, will not hurt anyone or get in the way of things.

If anything, the only discomfort many reviewers had was that the uncertainty they felt from trying it the first time dampened the excitement. So we think you’d need to try it a few times before getting used to it.

Also, make sure you’re going in with a more or less empty disc, not an almost full one. A full one would spill over when pressed against.

CAN I USE A MENSTRUAL DISC TO PREVENT PREGNANCY?

The disc is not meant to be a contraceptive. It may cover your cervix’s opening, but it is still possible to get pregnant or contract STDs. And there is a small chance of getting pregnant on your period too, so we wouldn’t risk it.

The good news is you can use birth control such as an intrauterine device (IUD) with a disc. However it is recommended by the various menstrual disc companies that you consult your physician first before you do that.

HOW MUCH DOES IT COST?

On the other hand, there are disposable discs like Flex or Softdisc which cost from US$13 onward per box (which should last you for at least one cycle.)

If you’re a first-timer, we’d recommend trying the disposable discs first, maybe splitting the cost with your friends, then investing in a reusable one only if it works well with your body.

This article was first published in Her World Online .