Warning: The images and visuals presented may be uncomfortable or disturbing for some. Please thread with caution!

Think horror and there's terror that strikes at the heart, sheer horror, and there's terrible, and its safe to say that in its 10 years of terrorising visitors at Universal Studios Singapore (USS), the park's annual Halloween Horror Nights (HHN) has seen a mix of all three.

A mainstay of the American park's highly anticipated Halloween festival in October, when old or abandoned homes are transformed into horror houses to scare people, HHN upped the ante by turning the whole park into a land of frights, with different themes across the various areas, filled with role-playing cast members and even innocent victims deployed to heighten the sense of scares.

The local version was first introduced back in 2011, in an attempt to bring the spine tingling fear into the hearts of the weak and fear ridden.

Since then, the scare affair has grown to become a staple at USS, evolving from simply importing Western horror to showcasing Asian stories, and injecting a local twist into frights, ghosts, ghouls, spirits, and the macabre.

If you've been a longtime fan of the event, you might even agree with us that 2016's edition marked the first time that HHN came out from under the shadows of its big brother in the US to stand apart as its own scary standalone event in Singapore.

Of course, the pandemic brought a temporary hiatus to the in-person experience, but if you know anything about fear, it's that real horror never dies and the park is bringing back infinite fear in person this year, as it looks to build on existing storylines and feature new horror houses, scare zones, and attractions – all of which are set to usher in the 10th anniversary of HHN.

With each significant milestone, however, it's important to look back and celebrate how far one has come.

Here, we travel back in time to revisit the best haunted houses, starting from 2011's Vengeance of the Matriarch, to the latest Curse of the Naga.

Many years ago, a power-hungry Nyonya seduced the village butcher to brutally murder her older sister in the family mansion.

Today, the restless spirit of this demented Peranakan matriarch still resides in this haunted house, inviting you to enter her ghostly abode.

The first-ever haunted mansion in Soundstage 28 at USS, the Vengeance of the Matriarch impressed with its attention to the details that were put into the props, scene design, and realism.

In the development stages of the project, the team actually visited the Baba House at the National University of Singapore (NUS) to learn more about the symbolisms behind the architecture and furniture of the Peranakan Houses.

All of that was carried over to the creation, which drew many a scream with its high scare factor, and set the tone for other iterations.

A storm-battered ship is found mysteriously adrift, after being lost at sea since 1910. The crew has vanished yet an unexplained presence lingers.

On a ship once thought to have disappeared in the dark depths of the ocean, the past is never truly dead.

One of the best haunted houses in HHN's history in Singapore, Adrift presented a standout theme that continues to be a core memory for those who attended the third iteration – and for good reason.

Apart from exceptional special effects and scares from all directions, there were also plenty of thoughtful, realistic details on board, which saw certain areas being dank, parts of the chamber feeling hot as intended, and a not-always upright ship.

It ended up as the most expensive haunted house in the entirety of the event, but it was all worth the extra cost, for it had ticked all the checkboxes for an immersive horror experience, from a unique, well-developed story to creating a lingering, claustrophobic sense of fear.

An underground train station built at a Malay burial site is torn asunder as a curse is fulfilled by the rise of the Blood Moon.

Toyols, hantu rayas and pontianaks now stalk for victims, as the tracks lead you back in time, to the author of the curse and his murderous henchmen.

Mention Russell Lee's True Singapore Ghost Stories, and chances are many Singaporeans will recognise his name.

Created in collaboration with the local supernatural writer, True Singapore Ghost Stories: The MRT paid tribute to the local scare culture, which was in part, cultivated by the books.

It brought in familiar paranormal entities like the pontianak, the ghost of Southeast Asian folklore, and the toyol, a mythical creature from Malay folklore referring to the ghost of a baby that died before it was born, as well as a historical touch.

As it was, the haunted house also featured the forgotten settings of Bidadari Station and Bidadari Cemetery, which both no longer exist now due to exhumation.

It was a cool way to revisit a piece of our history, with the team weaving everything nicely into a horror narrative.

Yet another first for USS, this attraction was a virgin attempt at a proper Witch House. What really stood out, though, was its innovative use of contraption and lighting effects that were highlighted through a strong attention to detail.

A carpet in the first room, for instance, could rise from the ground to create a floating effect, while a piano in the same space would play tunes by itself.

The sense of claustrophobia was further accentuated by its multi-level structure, which saw visitors having to walk up and down creepy staircases.

And just when you thought things were over? Animatronics would jump at you from the back in the last room. How fun.

The actual hospital of the same name has spawned a treasure trove of ghost stories over the years, so it's fitting that HHN6 modelled its scariest haunted mansion after it.

As if that wasn't terrifying enough, it also featured the use of fog, light, and darkness, allowing for extremely intense jumpscares. Lived up to its namesake, this attraction did.

Bringing a whole new meaning to "die die must eat" (colloquial speak to describe dishes that are especially delicious, such that one must try them at all costs) was the Hawker Centre Massacre, which took on an open-ceiling concept to create an authentic ambience.

The intricate props and attention to detail stole the show, and while the brighter setting did lower the scare factor, there was actually another surprise element in store.

Scattered around the house were three hidden red buttons that when hit, conjured up an additional surprise.

Enter the mind of Lord Obsession, a deeply depraved force for evil and experience a chilling and macabre foray into his psyche.

Inside the Mind is arguably on the same level as Adrift when it comes to creativity. The attraction took on a highly-unconventional concept that delved into the psychological realm, transporting visitors into the psyche of a murderer's mind.

There, various phases, such as repressed memories, being in the moment of the kill and recovering from impulses, would be uncovered, culminating into an abstract narrative.

Most of the scenes, as a result, didn't quite take place in the physical world and acted more as inference – but make no mistake, the journey still drew plenty of shrieks and jump scares.

When Will Byers mysteriously disappears, the small town of Hawkins, Indiana starts to uncover Stranger Things.

Discover haunting secrets as you make your way through Hawkins National Laboratory and stumble upon a portal into the parallel universe of the Upside Down.

Not only was this the first haunted house in Singapore based on a major IP, it also became a world's first for three Universal Studios theme parks to enter a partnership with Netflix.

Spanning 12 rooms depicting 12 different scenes, each tells the perspective of a different character in the popular series.

Since the themed houses were all designed independently, the local iteration featured some unique stunts that were exclusive to USS, as well as a couple of handful interactive mechanics, including a crouching segment leading to the Upside Down portals.

It was the closest that fans could catch the Demogorgon in action, and dare we say – never again.

One moment you're a tourist on the colourful streets of Bangkok. The next, you're being lured into the jungles of Thailand and find yourself stumbling into a lost village that is under the spell of the Naga, a snake spirit.

Beware the charms of the Serpentine Spirit or you may just be led astray and forced to bear the Curse of the Naga.

Ah, good ol' Thailand, a popular tourist spot for Singaporeans, and a breeding ground for all sorts of ghost stories.

Developed in collaboration with Thai horror film directors Parkpoom Wongpoom and Pawreen Purijitpany, Curse of the Naga featured a good blend of the familiar and fantastical, with a strong scenic design accentuating the Asian supernatural horror experience.

It wound up as the largest single project that has ever been used before at the time, and the magic worked – travelling to Bangkok now brings more apprehension than before.

There you have it, the best horror houses of each HHN edition. This year's iteration will usher in three main spaces: Killustrator: The Final Chapter, Operation: Dead Force, and the Hospitality of Horror.

The spook-infested affair will run across 19 event nights on select dates from September 30 to November 5, with tickets retailing for $68 for non-peak nights and $78 for peak nights, marking a glorious return to all things spooky, creepy, and scary. 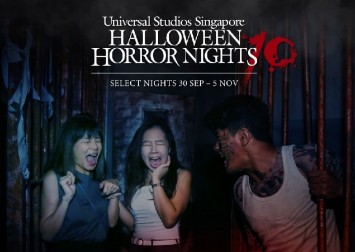 As per tradition, there are other attractions to check out if you want to fully embrace the Halloween spirit.

The scare zones will be filled by Dark Zodiac, a horror-inspired retelling of the Zodiac signs, and The Hunt for Pontianak, while The Silenced Auction live show, invites visitors to the grand revelation of Killustrator's gruesome creations.

Laser tag enthusiasts can satisfy their need for adrenaline in Escape the Breakout, diners can find company in a spirit medium in Die-ning with the Dead, and curious individuals can head backstage for all-new scares.

Do note that tickets for the three special experiences are sold separately, however.

Those with no intention to purchase them don't have to worry about missing out, as the three haunted mansions should bring enough scares to last through the night.

Operation: Dead Force is likely to be a personal favourite just based on the description alone – zombies, coupled with their makeup, always do a good job at drawing out screams, and it's likely we'll get to see special undead variations in action as well.

Reminder to self: remember to check the corners, lest they jump out from the dark and shatter our dignity in front of everyone else.