Honda Accord Euro R review: The 'H' stands for 'heart'

The Honda Accord Euro R is a car I’ve spent years lusting over, so when I finally got the chance to drive one, I leapt at the opportunity and this is the story of my experience with it.

We begin with a quick history lesson. The Honda Accord, as you might know, is the bigger brother to Honda's bread and butter saloon, the Civic. The Accord was built to be a statelier, more executive sedan but it had a dark side - the Euro R.

Starting with the CL1 generation Accord, the Euro R was created as a performance version of the Accord, built to rival the German giants like the BMW 3 Series. Therefore, the Euro R was never supposed to be an "Accord Type R".

Instead, it was tuned more for grand touring instead of out-and-out performance. It's also a very special car to be able to drive because, by right, I shouldn't be able to.

The Accord Euro R was never officially sold outside of Japan but by left, the car was parallel imported to a number of different countries where it became a cult classic. Today, the car remains extremely popular and is highly sought after not just in Singapore, but in Australia, New Zealand, and Europe.

Right, now on to my story.

I can still remember exactly when I fell in love with the Honda Accord Euro R. I had just booked out early from Pulau Tekong and I booked a hitch ride to get me home.

I recall the hitch pulling up and it was an Arctic Blue Euro R, much like the one I drove in this article. So anyway, I got in the front seat and set off on my way home.

It wasn't a long journey but it didn't take long to be mesmerised by the sound of the K20, how rock solid the chassis felt, and the deftness with which the driver was rowing gears.

Before that day, I had known that the Euro R existed but that was pretty much it, I never gave it much extra thought but once I felt one for myself, I was hooked.

Now guys, as we all know, have preferences, some prefer headlights, others boots. And me, sure I can appreciate a nice set of headlights but I’ve always been drawn to saloons. I love the way the Euro R looks, the simple and clean body lines make the car look like such a sleeper.

It has a sleek, sharp-edged, almost cheese-wedge/door-stopper rake to it that really makes stand out from the other Japanese sedans of the time.

It had healthy proportions and not one bit on the car looks or feels out of place. In my eyes, this is one of the best-looking cars Honda has ever made.

It’s a similar story inside too, Honda gave the Euro R a generous serving of goodies from the factory like Recaro semi-bucket seats and a Momo steering wheel.

The interior looks much like most other cars from the mid-2000s but as with all Hondas, the build quality has stood up against the test of time and even though the car I drove has well over 200,000kms on the clock, they still look pretty fresh.

Because the Accord is an executive sedan first, there is plenty of space inside for passengers and even child seats, and cargo space in the boot is plentiful to uh, boot.

One feature I’ve always found curious though was the gauge cluster, beautifully simple yes but the speedo only goes up to 180km/h which honestly, isn’t enough. The tac’ on the other hand, now that goes up to 8,500rpm.

At the Euro R’s heart is the legendary Honda K20A two-litre four-cylinder engine that makes 217hp and 206Nm of torque. The engine in this actually isn’t the same K20 that’s in the popular FD2 Civic Type R, instead, it’s actually the same one used in the DC5 Integra and EP3 Civic Type Rs.

So while the Euro R isn’t just an Accord Type R, it does indeed have some Type R pedigree flowing through its veins. Other performance-oriented parts included the six-speed manual with LSD which was the only available option.

Usually, when I collect cars for work, they’re handed over by a staff member from a clean and swanky showroom and the cars smell pristine and un-farted in.

Not this time though, obviously because this particular car was registered 14 years ago in 2008, I found this car as a rental and the handover was done in an HDB multistorey carpark.

There were clear signs of wear and tear on the interior and that new car smell was long gone but as I lowered myself into those Recaro seats, I didn't care at all.

I turned the key and the fabled K20 burst into life, this car has an HKS exhaust system which definitely made its presence known. I pushed the shifter into first with a satisfying thunk and set off, beside myself with excitement that for the next couple of days, this Euro R was mine.

I only made it one traffic light before I decided that I simply must feel the VTEC kick at that very moment so, of course, I did.

Though 217hp isn’t that much by today’s standards, it still gives you a good shove when you hoof it, but what sells the whole experience was the noise.

This car had installed a Choon’s air intake and my God, the noise the car makes can only be described as a drug and I was addicted from the first hit.

The VTEC crossover in the Euro R is so distinct and just eggs you on to do it again and again and the engine revs so freely and so willingly that you can’t help but keep turning more petrol into noise.

And whenever I was so blessed as to drive through a tunnel, you best believe I dropped several gears and disappeared, leaving behind nothing but a reverberating echo of Soichiro Honda’s legacy.

Away from the open roads, you might think that the Euro R isn’t made for the twisties but you’d be pretty mistaken. Sure, it’s not as nimble or agile as a Type R but it’s no slouch either.

The feel through the steering is beautifully communicative and the steering itself is direct too. You feel fully in tune with what the car is doing and it responds to your every input with such character.

Gearshifts feel purposeful and the car goads you into making use of its piano-style pedals to rev-match every downshift.

The LSD is a relatively simple one but you can still feel it working to manage the torque on acceleration. Brakes on the original car have been found to be inadequate for a car of this size but the one I was driving had AP Racing aftermarket brakes fitted which solved the issue. 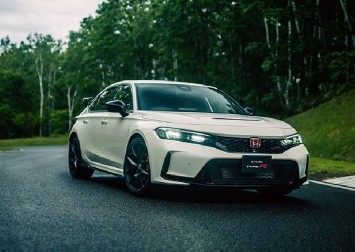 Carving corners in the Euro R requires a less aggro approach than in something like a Type R but to me, that’s not an issue.

You don’t have to be caning it at ten tenths all the time, by dialling it back a little, you’re able to take in more of the experience, from the road to the scenery, and most importantly, the car.

To me, the Euro R was more than just another car, this was a dream. Being able to drive this at all, let alone for the several days I was able to, was such a gift and one I relished.

Even though the car was loud and antisocial, I just never wanted to stop driving. They always say don't meet your heroes, and that might be true sometimes but not always. Sometimes, your heroes pull through.

Big thanks to Tofurentals for being a braver soul than I am and putting this car up for rent and letting me have a go.