'I burn my mouth more on hot food': This sword swallower and fire eater isn't afraid to live life on the edge

Many of us were told that we should never play with fire — figuratively and literally — but Heather Holliday does just that for a living.

When we meet her via a Zoom call, she's elegantly poised on a plush armchair at her stay-home notice (SHN) venue, and in good spirits even though this is her second time going through the whole SHN process here (more on that later).

Despite not being dolled up like how she usually is on stage, she's still absolutely stunning and we can feel her charisma radiating from the other side of the screen as she chats about sword swallowing, fire eating, the pandemic and everything in between.

While it was never her childhood goal to be "working in a freak show and doing freak show acts like sword swallowing", Heather says she has always been very involved in the show business and even did a few acting and television commercials in her childhood.

But it was the circus scene which hooked her in when she visited Brooklyn's Coney Island as a teen.

"It wasn't on television. It was really low key and underground. And I thought that was really cool," Heather, who declines to reveal her age, says with a twinkle in her eye. "I quite liked things that were not very popular and that were more secret and private."

Heather was so captivated that when she was just 18, she decided to intern at one of the side shows at Coney Island as a magician's assistant.

At that point in time, she didn't have any skills so she had to learn everything on the job, including snake charming, fire eating and breathing, and sword swallowing.

Heather's big break came a year later when the team's sword swallower left to go to another show in Texas and she leapt at the opportunity to take over his role gleefully.

And then a few years later, the woman in charge of fire eating quit as well, giving Heather an opening to pick that skill up full time too.

She eventually made a name for herself as the youngest female sword swallower in the world at just 19.

Crediting her success to growing up in the vibrant New York City, she muses, "I often think what my life would be like if I grew up somewhere else. And if I would have had that outlet to discover myself."

A protective father and an overly-excited mother

The idea of stuffing swords and fire down your throat may sound terrifying to most, but for Heather, it's exhilarating.

In fact, she was so mesmerised by the act that the first time she was taught how to eat fire, she was too excited to even listen to her instructor.

"As the guy who taught me to eat fire was explaining about how to breathe through my nose, I was like 'Yes! Gimme! Gimme! Gimme! I wasn't even listening to him!" she recounts animatedly. "I wish I respected the danger, but I was really eager to try it".

Besides the obvious burns, other occupational hazards include peptic ulcers and respiratory infections. But Heather remains unfazed.

She tells us, "I burn my mouth more on hot food than I do on fire!"

But her father did not share the same sentiments. In fact, he was terrified, she recalls.

"My father was very protective, obviously, because I'm his only daughter and he didn't want me to do it," Heather explained. "People thought that he wasn't supportive of me. But it wasn't that he was unsupportive. He was just worried". 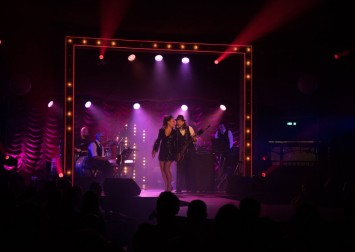 "Everybody is happy with what I do, but no one wants their daughter doing it," she added.

Initially, she kept her wild and unconventional career choice a secret, but eventually, her father saw a feature of her in The New York Times and "freaked out".

It took some time and plenty of trust but after a while, Heather's father — though still concerned — gradually accepted that this was something his daughter really wanted to pursue.

"He's seen me blossom into a woman and he just trusts me," Heather tells us, getting emotional.

Funnily enough, her mother is the complete polar opposite, she says. She lives vicariously through Heather and even helps to make some of her costumes.

Heather shares with a laugh, "My mum's an artist, so she just loves everything! It's different".

Performing during a pandemic

Like many other entertainers across the globe, Heather's life came to a standstill when the pandemic hit.

In the midst of the lockdowns, she was in New Zealand doing a show and had to make impromptu changes to her itinerary — a huge challenge for her as she does not have a fixed home due to the nature of her job.

"I didn't have anything planned and I don't live anywhere so I was like, 'Where can I go?'" Heather recounts.

Making the best of a thorny situation, Heather says she spent her downtime with her loved ones.

"The one good thing about the pandemic was spending time with my family, because normally, I work so much I'm never home."

For the first time in years, she was able to spend her birthday with her loved ones. She also jetted over to Scotland to stay with her boyfriend for six months, which was the longest period they've spent together, she says.

But that's not to say that she didn't try to find alternative gigs to keep her busy in the absence of live shows. She did do a few Zoom and online shows but she tells us she wasn't a fan of it as it felt like people thought she was a phoney.

"It needs to be live. You need to see my throat come up to here," she says, gesturing towards her neck. "You have to see that there's spit on my sword when I take it out. If you don't see that, it's not real."

Just as it seemed like she was set to perform live again in the La Clique show slated for May this year at Marina Bay Sands, the pandemic pulled the rug out from under her feet again.

Heather was in her second week of SHN when she received the news that the show had to be cancelled as it coincided with Phase 2 (Heightened Alert). And despite already having completed two out of three weeks of her SHN, she was not allowed to leave the country until she had finished her last week of quarantine.

While she admits that she enjoys being in quarantine and having time to herself, that final week of being cooped up in her hotel room was tough.

Apart from not having the show to look forward to anymore, she also had to figure out her game plan after leaving Singapore.

"I was like where am I going? What am I doing?" Heather says.

It was only when she was at the airport that she received news that a show in Las Vegas needed performers, she says, so she had something to tide her through while waiting for the situation in Singapore to improve.

And luckily for us, La Clique is currently back in town so we'll get to see Heather in action from Sept 18 to Nov 7.

While her last few memories of Singapore weren't exactly the best, Heather says she's happy to be back this time around and can't wait to explore the city.

"When I get out of here, I get to eat food that I want to eat rather than only what [the hotel] provides. That's what I'm looking forward to," she enthuses.

"If it wasn't for the food, I'd be fine with being in quarantine!"

If you want to catch Heather in action, you can book your tickets to watch La Clique at Marina Bay Sand's Sand Theatre here.