There are certain distinct personalities that develop during a global lockdown, or in our case, circuit breaker. When you're bored in the house and in the house bored, it's only human nature to try and while the time away.

First came the home bakers, affectionately naming their sourdough starters (my fave was The Yeasty Boys) and perfecting their banana bread recipe. Adjacent to that are the Masterchef apprentices, whipping up expertly plated meals worthy of a Michelin star.

Then there are the ones with the green thumbs, cultivating an edible garden (no lie, someone on my Instagram actually grew watermelons in his high-rise condo) and lush greenery in their living rooms and balconies.

Then you have the next tier: The creatives and intellectuals, devouring this alone time to maximise productivity by learning five different new languages, a new instrument, finish two paintings, four courses on Masterclass and read their entire shipment from Book Depository.

I am none of those things.

My stay-home strategy was closer to one of the couch potato variety, happily choosing to do nothing but indulge in TV shows, movies and whatever YouTube tea channel I was into at the time.

But even for me, a homebody who prides herself on her pop culture and cinematic knowledge, after a month I was going stir crazy from being stuck in the house. There is only so much of Quentin Tarintino's catalog that I can take!

And as I fired up my laptop, contemplating what show to watch next, my eyes drifted over to my wardrobe. My one pride and joy in the house that I kept neatly packed and merchandised. And that's where I knew what my next project was going to be.

I was going to cure my cabin fever by decluttering my wardrobe.

How I started purging my wardrobe

Now this was a big feat that I have been evading for years. In my former life as a full-time stylist, I had accumulated years and years of wardrobe and props for shoots.

Even as I outgrew my own personal wardrobe, I would still keep these items on the guise that it could come in handy for a shoot or a costume party one day.

I would package everything neatly-sealed and labelled according to item type and material. 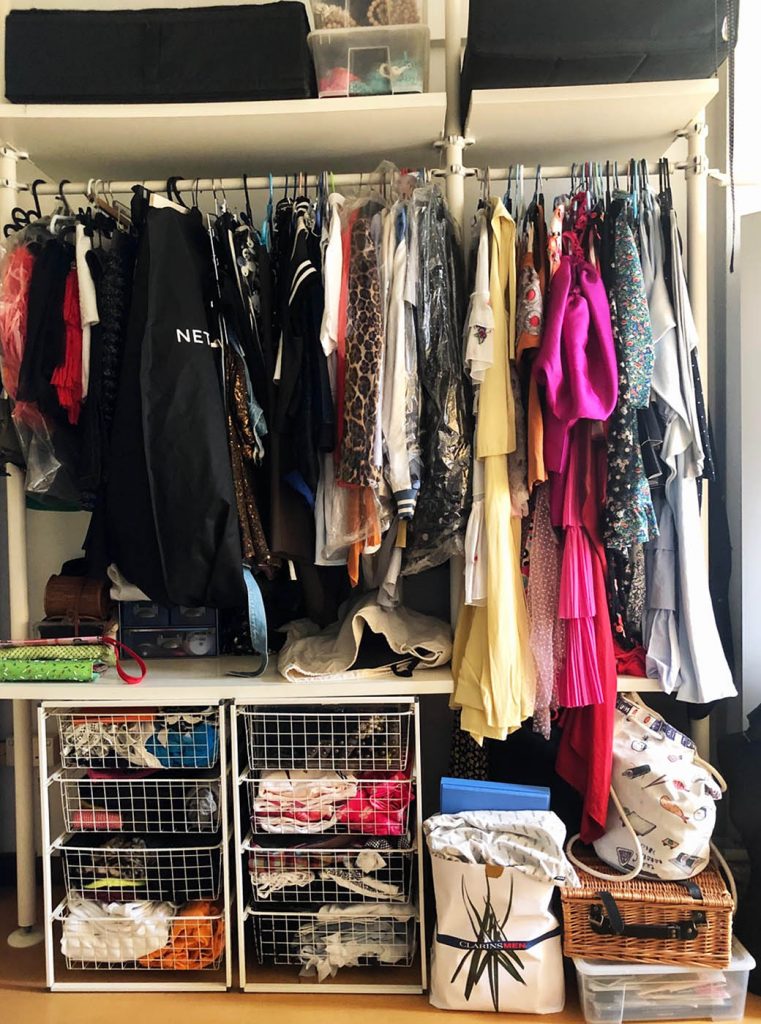 The time has finally come… for me to clean this mess up PHOTO: CLEO Singapore

Had I become… a hoarder? Was I doomed to live a life surrounded by boxes and boxes of… stuff? And as I pictured my obituary in the papers with the headline "Fashion Victim Accidentally Smothered To Death Under A Pile Of Shoes!" I decided enough was enough.

Now this was not going to be like that montage scene in Sex And The City where Carrie invited her friends to rate her clothes over copious amounts of champagne. This was a roll up your sleeves, heavy-duty culling-and no item was safe.

Every item I owned went through the same thought process:

If the answer was no to the majority of the questions, they went straight into the donate pile.

Because I have two wardrobes in the house (yes, I know, I have a problem) this was an extremely grueling process that took close to two weeks to settle.

I cycled through a mixture of nostalgia and shame as I pulled out items that once held meaning to me. But this time I was not going to be fooled by sentiment. Unless it was something that was incredibly special to me, I was going to get rid of it no matter what.

If I wanted to declutter my life, I had to be brutal.

Decisions: What to keep and what to throw?

And once I started, I could not stop. After I had gotten rid of the excess, I felt like I had newfound clarity. Once I could see my clothes clearly, I realised the sheer volume of it had been preventing me from living my best life.

I had been doing stupid things like buying black blazers because I felt like I was missing the perfect one, only to realise I already had five hanging in my cupboard. 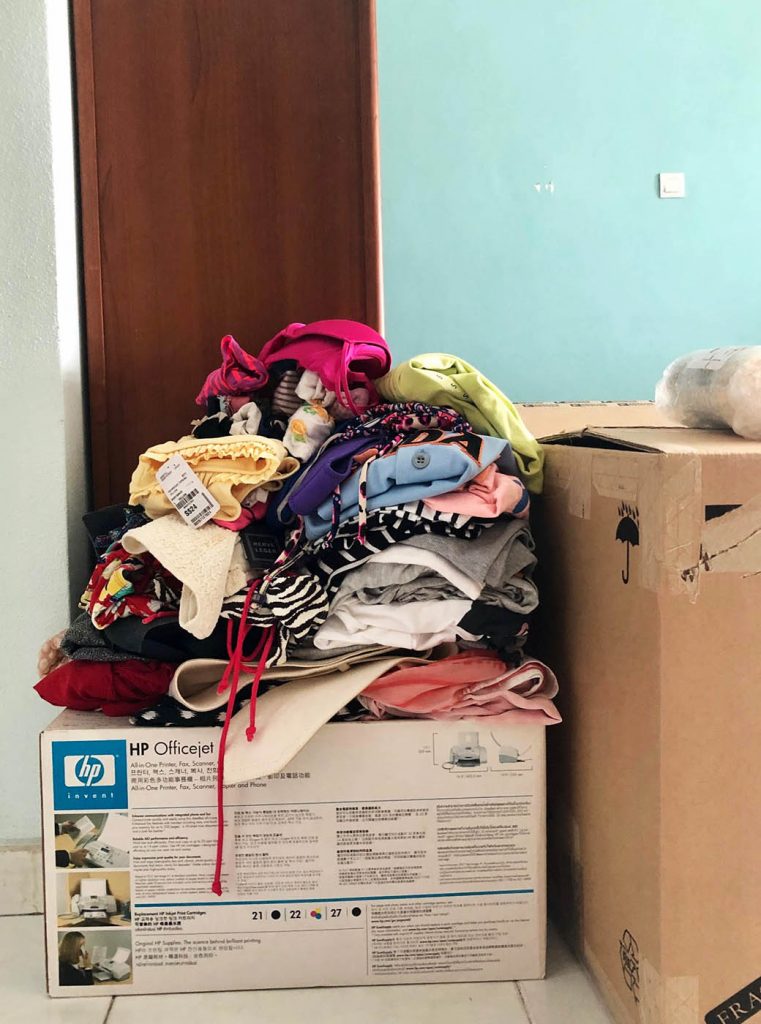 Some of my items in my “meh” pile which some items still BNWT PHOTO: CLEO Singapore

And since I was already laser-focused on my mission, I decided to enact part two of my plan-to whittle down my already edited wardrobe to only things that I love and use.

The trick to decluttering is to be quick about your decisions. Ask yourself if you have a visceral reaction to the piece you are holding. If you have doubts, or have to think for a long time on whether you really like it, chances are you don't.

That was the trap I fell into the last few times I tried to declutter, convincing myself that while I didn't love it now, I still didn't hate it enough to let it go.

But just like how your lukewarm feelings for that "meh" guy you met on Tinder don't progress as you go on more equally tepid dates, the same goes with your clothes.

A big reason why we go through the dreaded cycle of having nothing to wear even though our wardrobes says either wise is because we can't see our clothes.

Once everything has been arranged properly in full view, you'll be able to dress better and fill the gaps properly if necessary.

Once I was fully done, I sorted everything into boxes ready to be donated. Anything that had potential for resale I listed it on The Fifth Collection.

A word of advice: Unless you have the time and effort to dedicate to reselling, don't be too quick to put too many items in your "to sell" pile. Chances are you'll be too lazy to list them and end up creating another messy pile in your house.

I tallied up the amount of stuff I had in my living room-I had five boxes and two duffle bags, each weighing 20kg and 15kg respectively, which brought the grand total to 130kg. 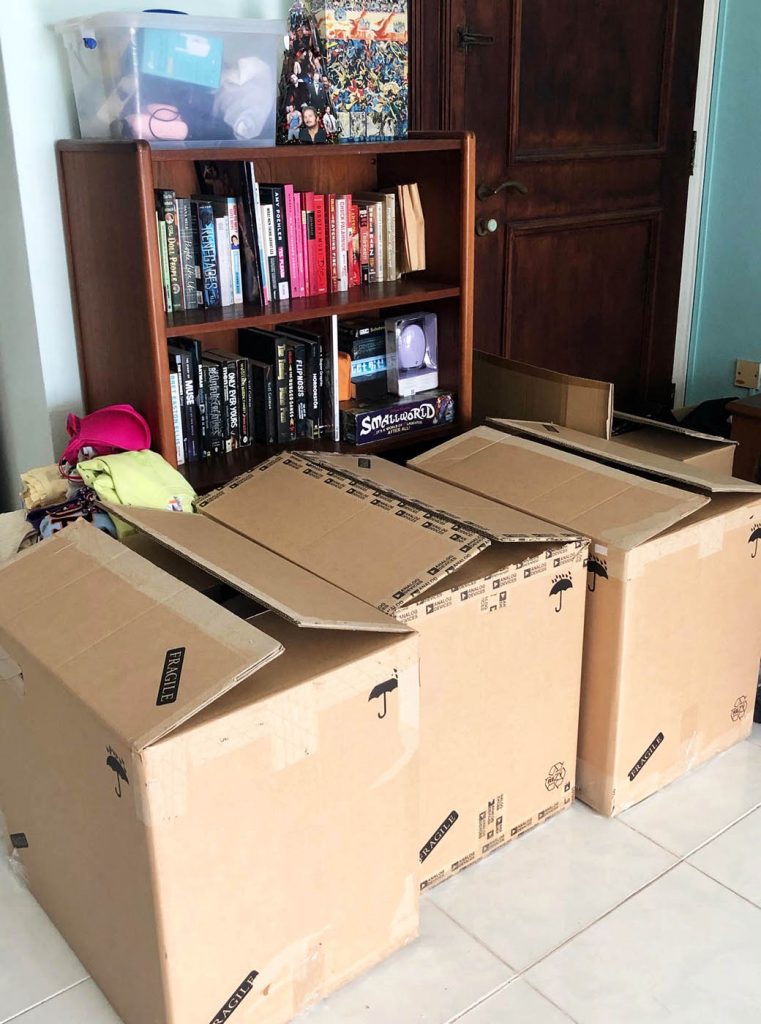 Years and years of clothes, all ready to be donated PHOTO: CLEO Singapore

130kg!! That's how much stuff I had accumulated over the years! I couldn't even begin to fathom how much money I could have saved if I didn't buy so many things. Probably a few round trips to Europe and back.

So after all that decluttering, am I a changed person? I would say I am somewhere in the middle. As we slowly transition into phase two and retail is opening again, I can't say for sure I won't be able to resist the allure of popping into Zara for a quick look-see.

After all, we've all been stuck at home for so long and I miss dressing up!

And while in the past I would have just skipped straight to the counter without a second thought, I now ask myself those same five questions whenever I feel the urge to buy something.

And if the answers are still no, I'll back away slowly, find the nearest Koi and mentally pat myself on my back for not letting my wardrobe take control of me again.