'I just wanted to be on TV': Meet the food delivery rider praised for elevating Malay cuisine on MasterChef Singapore

Ilya Nur Fadhly may have made it to the top five on MasterChef Singapore Season Three, but there's one critic he has yet to win over — his wife.

"My mum thought I was ready so she told me to try out for the show, but my wife still thinks there's work to be done," the 36-year-old food delivery rider and self-taught chef tells AsiaOne good-naturedly.

As for his own motivations for being on the show, he quips: "Actually, I just wanted to be on TV lah."

Ilya turns serious as he adds that the moment he officially received his apron — signifying that he'd made it to the show — was a pivotal one for him. It was then that he truly felt the gravity of the competition and set his eyes on the prize.

"Nothing else mattered," Ilya tells us. "I didn't want to be second, third, fourth. I wanted the title."

The fiercely competitive chef was eventually eliminated in the eighth episode, but left on a bittersweet note, with Chef Bjorn Shen offering high praise for his performance: "In my opinion, no one in Singapore has elevated Malay cuisine to the same calibre that you have done."

His standout dishes included a chwee kueh with beef, which won him $3,000 in one challenge, Bananalala, a creative spin on the classic goreng pisang, and Prawn Cooked Black, a sotong masak hitam-inspired dish with prawns in a baby octopus broth.

Ilya also emerged as the only contestant to make it past the first half of the season without landing in an elimination round. 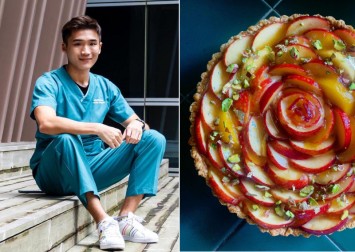 When we speak to Ilya, it's a few months after the elimination — the bulk of the latest season was recorded last year — and he's sanguine about the outcome.

"All I can say is I'm quite proud that I managed to do what I did," he says.

TV ambitions aside, Ilya shares that one of his goals was also to tackle the stereotypes of delivery riders as "uneducated" or "not doing well at home".

Formerly an education consultant, Ilya quit his job during the pandemic after the company implemented pay cuts.

He started working as a food delivery rider while job hunting, but eventually decided to go full-time when he found that it paid even more than his previous job.

While there are some who make judgements and assumptions about delivery riders, Ilya tells us he's "not ashamed" to wear his uniform.

"You will be surprised to find out that most of these riders are either very educated or they have their own businesses, and then this thing is just a part-time thing to supplement income," Ilya explains.

And then there are also the incredibly hardworking riders with multiple jobs, he adds.

He has a 'food project' cooking

Ilya himself has his own side hustles — he helps his mum with her halal bak chang business and also sells his own line of handmade motorcycle helmet bags (yes, the man also sews).

Of course, he also has a "food project" in the pipeline, he tells us cryptically, although he does share that he's still in the process of saving up and amassing enough funds for it.

But fans of his work on the show can rest assured that Ilya will continue on his mission to bring Malay flavours to the fine dining world.

"There's a lot of things that Malay households cook that not many people know. Sometimes another Malay might not even know," Ilya explains, adding that he hopes to spread his culture through food.

Pointing to some of his comfort foods such as fried rice and kacang phool (a stewed bean dish), Ilya promises a unique spin on such classic favourites.

"It will look different, but it will taste familiar. Or maybe it looks familiar, but then when you taste it, it's something else there."