With work from home (WFH) arrangements ongoing for several months now, some of us may be met with WFH fatigue, especially when faced with regular midday disruptions — your neighbour’s renovation work, for one.

We know all about the alternative of working from a hotel, but how about working from an airport lounge? With travel an impossibility, Changi Airport launched a promotion for Jewel's Changi Lounge access last month and I decided to try it out.

Their current package till the end of this month costs $12 for two hours, with a top-up of $4 for every subsequent hour you want to stay. It also comes with two drinks (choose from a selection of coffee, tea, soft drinks, and also, Milo), and a snack (a chocolate danish on the day I went).

The ambience makes one feel like you're stepping into a lounge to wait for an overseas flight. Or like you're in a library without the deafening silence and with food options thrown in. It's clean and comfortable and honestly, in my opinion, a better option than working in than a cafe.

You'll get $2 shaved off the bill if you're a Changi Rewards member, so in total, I spent $18 for four hours and left feeling relatively accomplished.

For those who drive, the four-hour complimentary parking (if you stay for a minimum of four hours) is probably a good enough incentive to come.

Yes, unlike the other place we reviewed, it costs more than $15 to spend just half a day here, but you'll get two coffees and a pastry that would probably cost you upwards of $20 at a regular cafe (including GST). If you decide to extend your stay at the lounge however, note that complimentary parking will still be capped at four hours.

Unfortunately, there are no free-flow snacks, so if the danish is not enough to fill you up for those hours, you'd have head out to find food elsewhere. But given the plethora of food options at Jewel, this wouldn't be difficult.

To be fair, the latte that I had was pretty decent and didn't taste instant, and the chocolate pastry was actually pretty yummy. I heard a neighbour request for a second one but he was turned down.

One tip though, is to bring a jacket or cardigan, as it can get cold if you're staying for several hours.

Also, while water is served, it may take a while for the staff to get to you so it's best to bring your own water bottle (outside food and drinks aren't allowed in).

Booking ahead is recommended, as there are only 50 available seats per day. In terms of seating options, there’s a mix of regular tables, study desks, single sofa seats and huge sofa seats, as well as a long table. Seating choice will be on a first-come-first-served basis.

When I was there at about 2.30pm,  there were still plenty of available seats, but they soon started filling up by 3pm.

I managed to snag a study desk facing the wall that came with motion sensor lamps and an in-desk power centre.

There's also no need to worry that your laptop will run out of juice even if you're not at a desk, as almost every sofa seat had an attached power point. Wi-Fi was strong and stable too (enough for some to stream K-dramas on their devices).

Another good thing? There are portable tables at the reception that you can grab if you are at a sofa seat and need to work on a computer, so no worries about developing a neckache from balancing your notebook on your lap.

There were students, working adults, retirees and also some ladies who were enjoying a little midday tete-a-tete on the day I was there.

Thankfully though, the noise levels were pretty low and one can still get a decent amount of work done.

Some seats were left vacant due to safe distancing measures and even when the lounge was filling up, it didn't feel crowded at all.

Now here's the bad news. If you want to enjoy the lounge at current prices, you'll have to hurry and go before Oct 1. When we spoke to the reception manager while we were there last week, he told us that prices will be revised upwards next month. 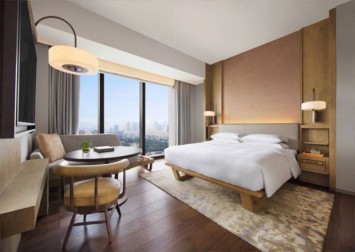 But from we were told, more food options at a la carte prices will be added to the menu — think finger food and small bites —  so the good thing is, customers won't have to work hungry.

To reserve or for more information, call 6513 8743 or email reservations.changilounge@changiairport.com.