I partied continuously for 45 hours on It's The Ship, because sleep is for the weak

It's no secret that I love partying. Just ask anybody who watches my Instagram stories. By extension, that means I also love music festivals. Any excuse to party, right? Which is why it came as a surprise to some that I hadn't gone for It's The Ship, which is touted as Asia's largest music festival at sea.

Well, fam, I righted that wrong this year. Armed with Hawaiian shirts, neon outfits, and a ton of glitter and face stickers, I boarded It's The Ship 2019, all ready for three days two nights of non-stop revelry. Here's an honest look at how the It's The Ship experience is like.

6pm: A wise man once told me the most important meal is the one you eat before drinking so you don't get too drunk too early. After some delays at check-in, I was FAMISHED. Hence this hurried, haphazard photo of my food before shoving everything unceremoniously into my mouth.

There's a 24-hour food counter that serves complimentary food and non-alcoholic drinks. The buffet is served at The Lido on Deck 16, but we found out that there's a restaurant on Deck 8 that serves a set Chinese menu.

9pm: I am ready to rave. The ship is huge, so be prepared to walk quite a bit. That said, there's something new to check out at every corner at different times of the day, so keep your eyes peeled. I vaguely remember a Pepsi bar in a lift. When I returned to that spot less than an hour later, a pop-up DJ station had sprouted up.

11pm: In terms of sound and visuals, the Crown Stage on It's The Ship did not disappoint. You can choose to jump into the pool if you're so inclined. It's also pretty interesting to people-watch from one of the higher decks. 10/10 would recommend.

1am: Time for a disco nap. Why not when your nice, fluffy, queen-sized bed is just 5 minutes away, right?

1:30am: As much as I had wanted to make it to sunrise, I tapped out way before the first rays of the sun hit the horizon. It's OK, I told myself. Like the Chinese proverb says, you go mild on Day 1 so you can go wild on Day 2*.

*OK, the proverb is actually something along the lines of how you have to rest so that you can journey on for longer. Same same lah.

9:30am: Spice Girls' Wannabe started blasting over the PA system at around this time, so I guess that was my wakeup call. Not sure if it's me or last night's Jim Beam talking, but the breakfast spread of pancakes and tater tots were a welcome sight. There was, surprisingly, no queue at the breakfast buffet. I guess everyone's still trying to sleep the first night off.

11:30am: One of the unique draws of It's The Ship as a music fan is that there's a very high chance you can get up close with your favourite acts. We're all onboard the same ship, after all.

I saw some DJs taking pictures with fans after their Crown Stage sets the night before, and in the day, I've just casually walked past a few artistes and even bumped into Alex M.O.R.P.H. in a dining hall. Heck, they were even taking part in side activities like arcade challenges and beer pong. How often can you say you've played friggin' beer pong with the headlining acts of a music festival?

2:30pm: One of the parties that I was really hyped up for was FYRE Fan Club, inspired by the greatest party that never happened. In an ironic twist of events, it started raining at the time of the event, and it looked like it was about to escalate to a storm. What greeted me at the venue were the iconic disaster tent, complete with rain-soaked mattresses and pillows, and a half-deflated duck mascot.

I don't know if the actual party was shifted elsewhere, because I might have missed the announcement over the PA system, and I couldn't check social media because Wi-Fi connection was pretty abysmal on board.

Mid-way through whining about how I really wanted to see Yung Raja live, I realised that it truly was an experiential restaging of Fyre Festival. 10/10. Bravo.

6:45pm: Truly living that #EatSleepRaveRepeat life at this music festival.

8:20pm: Because of the aforementioned rain, the pool party with Sam Feldt was shifted to a… dining hall on Deck 7? Not hating the vibes though, and the sound and lighting weren't compromised. Sure, there were people sitting down and having their dinner just 2 metres away from where I was party rockin', but I also enjoyed being able to grab a quick bite from the buffet line as and when I felt peckish.

10pm: Now that the rain has cleared, it's back to the crown stage again for headlining acts like What So Not and Ookay. To be honest, the night became a blur at some point. I remember hopping between the stages and my friend's room for drinks. Some generous maniac in the VIP area was pouring out shots for everyone. I took a photo with some guy in a gigantic sombrero. And, according to photographic evidence, I also bopped a Yoshi** on the nose. Good times? Definitely.

**Fine, some person in a Yoshi costume.

3am: I woke up to find myself tucked snugly into bed. How I got here, I have no idea. All I know is that I have very good friends who made sure that I was safe.

5am: There was an attempt to wake up again to join the last sunrise party of It's The Ship 2019. In my defence, I have anaemia and I tire very easily OK. 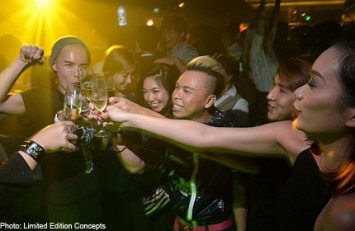 9:30am: There goes that wakeup call again, courtesy of Spice Girls. Also, I slept in my makeup and my skin hated me for it.

11:30am: Several glasses of water and one extensive skincare routine later, my skin hates me a little less. Actually, scratch that - I was freaking glowing after my Gua Sha and masking sesh.

12pm: Time to check out. Aaaaaaand that's a wrap on It's The Ship 2019! Here are some tips for a smooth check-out process: