'I took it out on myself': Actress Julie Tan shares her mental health journey as a young star

Those were the words local actress Julie Tan used to describe being in the entertainment spotlight since she was only 16.

Making her acting debut in the 2008 telemovie The Promise, many would think she was living her dreams from the adulation and fame.

However, behind her cheerful personality lies the pain and stress not seen by many.

In February, Julie, now 28, opened up about her mental health struggle in a 45-second clip on TikTok, sharing her history of self-harm and the continuous struggle to love herself.

Speaking to AsiaOne, she explained that she had "a lot of childhood trauma" with her mother, whom she said had difficulty controlling her emotions and "wasn't aware of how she was feeling back then".

Also, Julie shared that joining the industry at a young age affected her mentally due to the attention she received – with some leaving nasty comments under her social media posts.

She added that this negative impact was something "you don't realise because you are too young".

"Having fame at such a young age is actually very bad for your mental health because you're constantly worried about a lot of things like your insecurities," she said, "and when you go online, you see a lot of comments and those comments can be very unkind."

READ ALSO: Can you experience PTSD without realising it?

The tough competition she faced while in the acting industry had also taken a toll on her mental health, having to actively compete for popularity and fame as well as improving her acting skills. 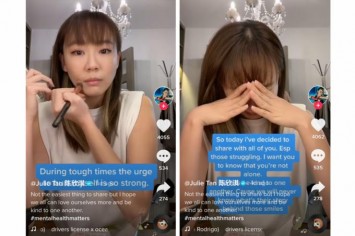 "I just thought that it's very negative and toxic," she said referring to fame-related award ceremonies she attended in the past.

She added: "All I want ... is to improve on my craft, I want to be a better version of myself, I want to focus on myself and my well-being."

While filming the 2013 Chinese TV series called Gonna Make It, Julie recounted that her mental health had not been the best then as she had back-to-back filming schedules while juggling her relationship with her parents and a former love interest.

"I just felt that nothing was going well in my life, except maybe for my career. And then whenever I need help, I don't know how to ask for help," Julie said. "I was not aware of my feelings. So, I kind of like – I took it out on myself."

She explained that her "head just felt very heavy like there's something weighing" her down and that she felt like breaking down due to the stress.

Recalling the very moment she broke down, she said: "I just saw this safety pin on the table, and I just took the safety pin and [started] cutting myself. And I just couldn't help it. I just like, kept repeating, do it over and over again."

The stress of feeling like she wasn't performing well had broken her, making her feel the "need to punish" herself as she "couldn't find a way to cope with her emotions".

In a media report on February 2021, she said that she has not harmed herself for over 10 months.

Following that incident, Julie shared the importance of workplaces being equipped with the knowledge and skills to deal with individuals coping with mental health issues.

She said: "Back then, we're not really well equipped with how to handle or cope with situations like this and I just hope that this will bring awareness to people around us."

"It's me against the world," Julie said, recalling those moments she felt alone.

She shared that as a perfectionist, she often pushes herself to the edge and finds it hard to pull herself back. Although some may think she is simply "throwing a tantrum", Julie said that she is actually "shouting and screaming for help".

Only after her director sat her down and talked to her did she seek professional help in 2019, and explained that she had to write down and acknowledge the hurt she felt while learning to forgive herself.

Despite the struggle she faced, Julie continues to move forward in her mental health journey, encouraging others to "be kinder, in real life or on social media".

How can we support our friends in their mental health journey?

Founder and principal psychologist at The Therapy Room Dr Geraldine Tan told AsiaOne that she chose to be a psychologist as human behaviour is a complex area – likening it to an adventure where she can help to shift people into a more comfortable realm.

Dr Tan dives into the different ways we can help to support our friends struggling with mental health issues.

1. Checking-in with our friends

On some days when we sense our friends are not doing well, Dr Tan advised to always look out and check in with our friends to see how they are coping.

Dr Tan said that asking the right questions – or saying the wrong words – can affect people's feelings. Simple words such as "How are you feeling?" or "Are you okay?" can affect their emotions positively. However, she added that we need to be mindful when using these words as we should be ready to sit with them to hear them out.

3. Don't place undue pressure on them

As friends, we tend to want them to feel better, sometimes unconsciously putting pressure on them to follow our advice, Dr Tan said. However, she shared that doing this can have adverse effects as we are placing our expectations on them.

4. Being there for them