‘I’ve always been in a male-dominated environment’: MP and CAG VP Poh Li San on climbing the ranks

Poh Li San is a leader on both commercial and political fronts: She is the vice-president of Changi Airport Group and a Member of Parliament for Sembawang West ward in the Sembawang Group Representation Constituency.

As you might imagine, she doesn’t have much free time, and she’ll be the first to tell you that striking a balance between these two roles is a constant work in progress.

“I feel like a juggler tossing and catching five to eight balls. It’s not easy, and I have meetings scheduled back to back most days. I have to be very focused to make sure meetings are productive,” says the 45-year-old.

“But there’s a limit to (managing different things simultaneously), especially when it comes to community work, where you have to walk the ground and talk to people to know what’s happening.”

Not that she would have it any other way. In fact, in being elected at last year’s general election, she’s just getting started.

Prior to her current appointments, Li San was in the military: After securing a Singapore Armed Forces Merit (Women) Overseas Scholarship, she became a helicopter pilot with the Republic of Singapore Air Force.

In 2003, she was assistant director of the Future Systems Technology Directorate under the Ministry of Defence, and in 2006, she assumed the role as the first female aide-de-camp (a personal assistant or secretary to a person of high rank, usually a senior military, police or government officer) to then-president, the late S. R. Nathan.

“I’ve always been in a male- dominated environment, from when I was in the SAF, then the aviation industry, and even now in politics.

"It may have taken more effort to succeed, but it’s not impossible – it’s a matter of choice. If you can demonstrate that you’re willing to make contributions and that you can excel, you will earn the respect,” she says.

In being well-acquainted with the struggles of making headway in male-dominated environments, she has a “special interest” in facilitating the provision of leadership opportunities for women in the workplace and for mothers to go back to work, so apart from speaking up on these issues in Parliament, she also works with various women groups like Mumpreneurs Go Places to bring their initiatives to life.

“I really hope that younger women do not become constrained by certain mental models and think that, because they’re women, they shouldn’t do this or that, even when they actually want to. 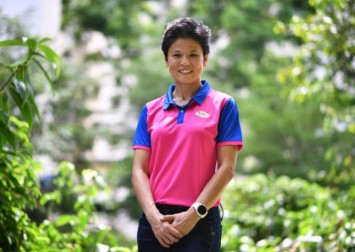 "It will also be good if more women are willing to take on senior management roles though, of course, the perennial challenge is being able to do that and take care of a family.”

And when not advancing these causes, she not only works with female residents in her ward on green initiatives to promote sustainable living, but also makes it a point to grow a community of women with events such as SG Women’s Festival: the first one was held in 2019 and featured fitness classes, health talks and self-defence demonstrations.

It has since become an annual affair, and this year’s live stream attracted some 3,000 viewers.

Li San doesn’t exactly have a conventional image – she’s single and doesn’t have kids. But that doesn’t mean she’s any less relatable.

“It is very hard to be a mum, career woman, politician and sportswoman, unless you don’t sleep,” she jests.

While she started volunteering with the People’s Action Party in 2018, it wasn’t her first volunteering stint: she’d volunteered as a councillor with Southwest Community Development Council for three years in her 20s, and only stopped because she had to travel often for her piloting career.

And much as she concedes to also not having much free time now, she makes sure to have pockets of “protected time” for herself every day, and typically spends it working out. But she has no complaints.

“I like to solve problems, especially complex ones, because they challenge me to push the boundaries of possibilities.

“I hope I don’t ever have to retire. I can’t sit still and wish to continue bringing value to people who appreciate what I can contribute. Social work is unending, and if I have the opportunity to keep giving, I’d be most happy to.”