In Chinese culture, death is a very taboo subject. Mentions of any sort are often met with knocking on a wooden surface and "choy choy choy" here in Singapore.

As such, cemeteries are nowhere near that the top of the list of places to visit for most Singaporeans. Unless it's Qing Ming (tomb sweeping day) perhaps. Talking about the dead (and the undead) is rare, unless it's to spook your friends out or when it's the Hungry Ghost month.

Who would have thought that my maiden visit to the local cemeteries for an assignment would be on the first day of the 7th month aka Hungry Ghost Festival? The day that "brothers and sisters" return from the afterlife to feast amongst the humans.

"How come there are blocks in the cemetery areas?", asked one of my travel companions on our ride in, referring to what she had seen on Google maps. "Do people stay there?"

Well in a way, I guess, there are people staying in the blocks in the cemetery. People who have since passed on, that is. the plots of land in the cemeteries at Choa Chu Kang are labelled as blocks, and like HDB flats, they sometimes have appendages to their numbers, like Blk14d and Blk7b.

And like how each household is assigned a unit-number, each grave has one too.

We were there in the afternoon and to my surprise, the cemeteries were pretty quiet as I had thought that there might be people here making offerings. That's because you can make the offerings anywhere for Hungry Ghost Festival, while for Qing Ming, it has to be done at the location the dead are buried.

The sight that greeted us in the Chinese cemetery was rows upon rows of chest-high tombs that at a glance looked to be replicas of one another. And they followed the contours of the uneven landscape of the area.

But upon closer look, you'll notice that each one differs from the other.

It's not just the faces and names on each tomb. Some are adorned with carved lotuses, others with Chinese lions. Ornate carvings of scenes from ancient China adorn the sides of some and you have those that are covered in mosaic-like tiles.

However, they are all of the same height, unlike in the Christian cemetery where they come in all shapes and sizes, some with life-sized statues on them.

One other commonality that most Chinese tombs have other than height: a small carved shrine at the front for the earth god. The bodies are buried in his territory, underground, after all.

While walking amongst the tombs, there is a sense of peace and quiet, perhaps simply because there is still silence.

It was only in our second hour there did we spot another person who was there to visit his grandmother, offering up joss sticks, paper money and food. He has come every day for the past 20 years, he shared, as his grandmother was the one who brought him up.

"That's a lot of effort," I exclaimed. "Not really," he replied. "After all Singapore isn't very big and it's something that I want to do."

As he deftly folded the paper money into ingot shapes, he told me that he had come over from the adjacent block where his eldest aunt's tomb was. 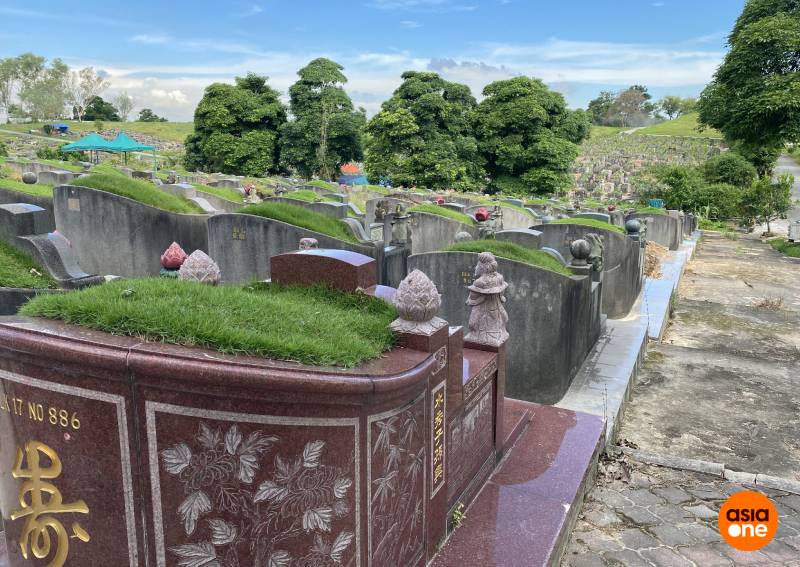 The allocation of tomb spaces in Singapore is regulated by the National Environment Agency (NEA), and you don't get to determine which plot you are assigned. It boils down to the date of death and some luck.

While we were there, there were also a lot of boarded-up construction areas as since 2017, NEA has been exhuming graves for the expansion of Tengah Airbase. Multiple heavy vehicles were not really what I expected to see at a cemetery.

And it is common to see makeshift like tents in the middle of a sea of tombs. These are resting areas for those who maintain the area, as well as those tasked with exhumation work. They could also be covering graves earmarked to be exhumed or are in the midst of being cleared.

As it was pretty uneventful during the day, I wondered if it would be any different at night, especially since the spirits are said to roam more freely in the nocturnal hours.

It was 12 midnight, and we were back on the same path to the cemetery again. It is dark, as there are no street lamps lining the roads within the cemetery complex.

From a distance though, we see the flickering flames lining one of the roads. It's set up by a temple group we're told.

Every year during the Hungry Ghost Festival, they will light candles, with joss sticks next to each one, to guide the spirits, our cemetery guide tells us. So you wouldn't expect to see this sight every night.

And in the middle of the lit candles is a huge furnace, where a fire, similar to that of a campfire, is burning what we can make out to be stacks of paper money.

We started walking through the rows of graves, taking great caution with every step as it was muddy and slippery at certain points, and a sense that a misstep might end in disaster, and not just the physical kind.

"Remember to say sorry to the 'uncles and aunties' as we are disturbing their homes," our guide reminds us as we walk through the narrow gaps that separate one grave from the next. For myself, I'm trying my best to gain steady footing with each step I take so as to not accidentally fall onto any of the tombstones.

Our guide was keen to show us what a grave being exhumed looked like. You can see the coffin or bones, he says. But alas, we didn't encounter any despite his best efforts in bringing us through nearly all the blocks that we could.

Nothing to be afraid of

Why did you do such a thing, asked my friends who later found out about my unusual visit. "And of all days, on the first day of the Hungry Ghost Festival!", said one in an annoyed tone out of concern. 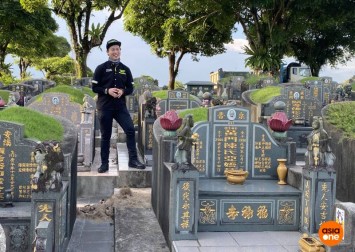 My senses were probably more heightened than usual because of this haunting period and there was some concern that we might "meet" something, but I didn't sense anything that differed too greatly from my daytime experience.

Also since my conscience was clear, I didn't think I had anything to be afraid of.

However, I later found out that my guide thought I was being unusually quiet and reserved. He was concerned that something had happened, and worried that the spirits had gotten to me.

But for me, being silent was the best form of respect to give a place that exists for the living to remember the dead.

Would I recommend visiting Choa Chu Kang cemetery to others? Why not, if you are not easily spooked.

Some people enjoy going to quiet places to clear their heads and just to escape from the busy city life. This is one of the quiet spots Singapore has that hardly sees anyone and has the conditions you might just need for your contemplative thoughts.

The writer visited the Chua Chu Kang cemetery in the wee hours of the morning with a guide who does cemetery tours. Watch out for our upcoming video where the guide shares about his affinity with cemeteries and for a peek at what his tours are like.