Becoming is a series where we showcase individuals who have had to overcome adversity to become the person they are today.

It's been more than a decade since Phua Chu Kang Pte Ltd ended its run, yet most people still know Irene Ang for her portrayal of Rosie Phua.

Perhaps it's because the character's cheery personality, humour, candour and unmistakable, colloquial accent is not dissimilar from Irene in real life.

It is this friendly frankness of hers that makes talking to her feel as though we're talking to a long-time friend, instead of a multi-talented artiste who doubles up as the founder and CEO of artiste management company, Fly Entertainment Pte Ltd.

Despite her illustrious accolades and intimidating-looking job titles, the 51-year-old is as real of a person as you can get, something Irene purposefully does.

"If you don't make a conscientious effort to be real in your own little circle with your friends right, you will get very depressed and you get very lost, you know?" she says.

It did take her a while to get come to this realisation though.

For the longest period of time in her life, Irene was constantly focused on maintaining a certain image or brand that she believed she should have as a celebrity. The facade eventually wore her down, she found herself unwilling to talk outside of work, and eventually, the baggage became too much to bear.

When she finally decided to let go of her self-imposed image, it felt like a heavy weight had been lifted off her shoulders.

Being caught up in maintaining a certain image is not something Irene's unfamiliar with as she had gone through similar experiences during her schooling years.

Back then, she juggled schoolwork with many extra activities. "Have you heard of anybody with 11 co-curricular activities (CCAs)?" she quips. She held student leadership positions in secondary school such as captain of the debate team and was a member of the school council.

To her friends and schoolmates, she was the exemplar of the perfect leader. None of them knew of Irene's dysfunctional family and difficult childhood, and that she had contemplated suicide when she was in secondary three, and again when her relationship fell apart.

A tough childhood: Learning to forgive her parents

When talking about her earlier years, Irene doesn't shy away from sharing about her less than stellar family background. She doesn't sugarcoat it either.

She speaks candidly about her mother's drug abuse, her absent father and about how she found herself moving between relatives' homes with her brother and grandmother.

Hence, Irene did whatever she could to stay out of the house — she taught swimming during the weekends, sought jobs as a promoter during the school holidays, and kept herself occupied with all her CCAs.

While she busied herself, she was not blind to the fact that her circumstances were different from her peers and resentment towards her parents built up.

She'd ask her grandmother "why [she] was born into such a family". Her grandmother's response was to learn to see the positive in everything and to be thankful for being able to give.

As her grandmother had been the only person who had ever cared about her during her growing up years, she was understandably devastated when the elder passed away in 1996.

"I didn't know what to do without her," Irene shares after a long pause.

After her grandmother's passing and the loss of the biggest pillar of support in her life, Irene tried to drown herself at sea.

"But I forgot I could swim, so I couldn't [drown]," she recounts with a laugh. "So I swam back to shore and gave up. Living is much easier than dying."

Her grandmother's final wish was for her to take care of parents no matter what, a task that Irene has taken to heart, though it wasn't easy at first. The devout Christian shares that it was only after praying for strength and the ability to forgive that she was able to speak to her parents again.

Now, they both work for her — her mother as a chef in one of Irene's restaurants and her father as a driver for Fly Entertainment.

'No one that is successful has never failed before'

Becoming an entrepreneur was never in the works for Irene. However, being in the media industry as an artiste and witnessing first hand the issues faced, spurred her to start Fly Entertainment.

Having grown up where she was mostly living hand to mouth and couldn't afford to pay for her O-level exams without the help of her friends, she was afraid to take the first step as she was worried about financial woes should she fail with Fly.

Thankfully her then-boss was supportive of her passion as he saw how passionately she spoke about the acting profession in Singapore.

He also reminded her she could return to working for him as an insurance agent and this was the push she needed to take the leap of faith.

Fly has since produced internationally recognised talents, including Henry Golding, Constance Lau and Tan Kheng Hua, all of whom had made it to Hollywood with 2018 hit movie Crazy Rich Asians.

It hadn't been smooth sailing though. In 2009, Irene found herself $300,000 in the red due to the global financial crisis. No one was hiring artistes, budgets had been cut and events were drastically reduced.

She didn't just sit around waiting for things to get better. Instead, she sought ways to engage clients, cut her own price and even put out Fly-original shows. By the end of the year, the business was reaping in profits again.

Read Also
From stuntwoman to media mogul, Irene Ang says everyone should build careers 'like our HDB' 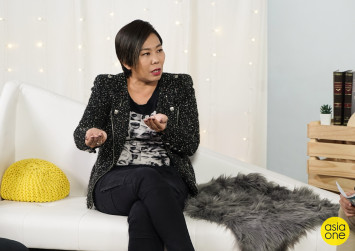 Interestingly, it's during such crises that Irene says she becomes more alive. Before the coronavirus pandemic hit, she found herself languishing around without a purpose, with retirement crossing her mind multiple times.

When the pandemic hit, it was as if the beast within her was awakened from its slumber. Like the previous crisis, she knew she was responsible for her employees' livelihoods, and she took it upon herself to find new revenue avenues.

Hence in the past year, she opened up a new food establishment, Soi Candy, and pivoted Fly Entertainment online. The former's business is "better than expected" and the latter has triple the number of jobs as compared to before the pandemic, according to Irene.

When asked if those were her best accomplishments in 2020, she shakes her head and laughs.

"My proudest moment was when I set up a zoom call by myself!" she exclaims while beaming from ear to ear.

The self-proclaimed "tech idiot" took a while before she was finally able to figure it out. The process took multiple attempts of fiddling around with the settings and calling on her assistants for help when nothing seemed to work.

But failure is something that Irene has long accepted as part and parcel of her life, and she considers it instrumental in her successes.

"I've learnt how to bounce back [from my failures], I've learnt about grit. Each time I fall, I get up faster.

Irene adds a parting word of advice: "The more you fail, the better you are at bouncing back. So go forth and fail."

Watch the video to hear more about Irene's struggles through her childhood and how she overcame the adversities life threw her way to become one of Singapore's biggest artiste and media mogul.