'It took months to see the end of the tunnel': Gymnast opens up about how her coaches caused her eating disorder – and why she still loves the sport

When she first started gymnastics at the age of eight, Joy Koh recalls being mesmerised by cartwheels and splits. But she was soon hit with a reality check.

Subscribing to the "no pain, no gain" mindset, her coaches would body shame her and push her beyond her limits, the 36-year-old tells AsiaOne.

"If a child is crying and puking, it's correct [to them], because the more pain you're in, the more progress there is," she says of her coaches.

The constant abuse even caused her to develop a host of eating disorders, from body dysmorphia to bulimia.

Now an accomplished coach herself, Joy says she's determined not to let her students go through the same thing.

She's also had a whirlwind stint on television as part of the cast of The Apprentice: One Championship Edition, competing with 15 other contestants for the chance to win a one year job with the sports media company and US$250,000 (S$331,121).

While her pitch on developing the company's brand in the children's sport industry didn't get her far (she was 'fired' in the fifth week of the competition), Joy says the experience was "amazing" and further cemented her passion for working with kids.

Back when she first took up gymnastics, her parents had objected as they were afraid of her getting injured, Joy recalls. But she insisted as she was drawn to the sport.

So when her coaches began berating her for being "too fat", she felt like she had nowhere to turn.

"I couldn't tell them the struggles that I was facing in the gym. Because as soon as as I did that, they were like, 'Well, see, I told you, so you should stop.'"

The granular focus on her body was only intensified by the 'talent ID' process – her coaches would keep track of everything from bone density to the length of her arms and legs. 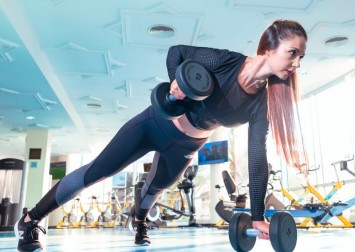 As someone who was naturally "big boned", she wasn't considered "physically gifted" for the sport, she explains. Whenever she couldn't get certain skills or moves down, her coaches would chalk it up to her weight, says Joy.

By her teenage years, she'd developed body dysmorphia and bulimia, and also suffered late onset of puberty as a result.

It was only when she left the sport at 16 that she began the process of working through everything, she says.

Things got better once she was out of the toxic coaching environment, she shares, but it took her years to get back into fitness and healthy eating.

"And it doesn't happen overnight, it took months, if not years, to see the light at the end of the tunnel," Joy says . "And you're like, wow, I can actually look at myself and not be terribly disgusted at what I see in the mirror."

Going back to gymnastics

Despite the detrimental effect her coaches had on her, Joy says she's not giving up on the sport – which she still loves, she makes sure to emphasise.

Closer to home, Singaporean gymnasts have said that they were pressured to lose weight and diet.

"And so part of me wanting to come back to the sport is to have a positive influence, and to hopefully develop the sport.

"I think definitely just knowing that, somewhere, another child can be going through the same thing is part of the reason why I'm back coaching gymnastics," she explains.

For her, seeing them surpass their limits and learn new skills is "priceless", she says.

Since she's returned to gymnastics, she's been doing better than ever, coaching at prestigious events including International Gymnastics Camp in the US and judging at the Asian Games and World Championships.

Her eyes light up when she tells us about her new role as the head of gymnastics at an international school, where she'll work with kids from kindergarten, up to secondary school.

"Some coaches are very results oriented. They only want to work with talented kids.

"But I think about it this way. I'm really lucky that this child wants to sign up to do gymnastics. They want to learn so we're here to support them completely and help them in their journey."