Jamie Chua shares her newfound love for gardening and farming, says she's trying to breed chickens for her friends

Jamie Chua is known for her flamboyant lifestyle and her exquisite fashion sense. From her obsession with Hermès bags to wearing covetable couture, she is one of the most popular socialites in town!

In fact, Jamie Chua's house also boasts of a wardrobe that spans around 700 sq ft (yes! about the size of a three-bedroom flat) and she isn't afraid to flaunt what she has.

Only this time, she isn't showing off her luxury acquisitions, but something more 'down to earth'.

If you have been an OG follower of hers you may have noticed the lush lemon trees and the beautiful roses and a few new animals in her posts and videos.

This is all thanks to her newfound love for gardening and farming and she is quite proud of her sustainable choice!

Jamie recently started a new Instagram account (@jamies.secretgarden) to give her fans a closer look at her farm and garden. The mini-farm and the garden are located in her 10,000 sq ft two-storey home, and she grows everything – from lemons and guavas to brinjal and lady's fingers in her cosy garden.

She also has four adorable fluffy hen and two chicks who live in her mini-farm. Each of them has their own coop or as Jamie calls them, chicken bungalows or “chickalows.”

'Gardening is not an economical hobby'

While speaking to 8days about her new found love, Jamie shared that she was under the impression that gardening and farming was an economical hobby, but she was wrong.

"It actually takes a lot to keep a garden thriving, for instance, compost, special soil. bug spray and fertiliser. At the same time buying plants is also an expensive affair," she noted.

She also shared a rough estimate of her spending on her garden. "It's very hard to estimate, but it's probably [low five-figure] sum,” she said.

Read Also
Is sustainability a practice only for the privileged? 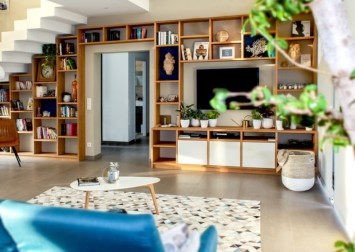 Jamie revealed that her biggest splurge so far has been her lemon trees. She has around 10 of them in her garden and the priciest one is a Meyer lemon tree that was “over $1,000”. The other nine were around $650 each.

She has also spent a lot on roses. "I must have over 100 pots of roses! One is over $30. I have to put three rose plants in each planter, so that’s almost $100 already. And I have so many planters," said the socialite.

Like the rest of Jamie's extravagant lifestyle, her knack for gardening and farming also doesn't come cheap!

But that's not the only thing she's splurged on.

Jamie also brought home two silkie chickens for $60 each; two were adopted and the chicks were given to her by a friend.

And there's an interesting story on how she got them home.

Jamie had been looking for a new place to stay and in one of the houses she viewed, she saw a chicken bungalow. When she spoke to the owner, she came to discover that they had silkie chickens.

She had no idea what and how these chickens looked, so she googled them and gathered information.

Also, silkie chickens can't be bought from just any farm or shop here. So, she asked her Instagram followers about the places to buy silkie chickens in Singapore and luckily, one of them got in touch with her.

He turned out to be a 15-year-old boy who helped her get her first two silkies from a private breeder. She then got in touch with other silkie owners who wanted to rehome their silkies and that’s how two of Jamie's silkies were adopted.

Jamie has been enjoying 'Italy summer vibes' in her garden

If you think Jamie's newfound love for gardening and farming started during the pandemic, you'd be mistaken!

Jamie told 8days that as a child, she kept regular chickens in her backyard. And because she lived near a chicken farm, she always had an affinity towards chickens.

She recalls that she had begun sprucing up her garden at home even before the circuit breaker.

She wanted to recreate "Italy summer vibes” in her own backyard with beautiful lemon trees and roses. As a result, when lockdown struck and they were at home, she was lucky to have a tranquil space where they could chill.

"I would keep myself busy tending to the plants and loved watching them grow every day," she shared.

Today, in addition to roses, she also grows her own vegetables. She loves making teas from rose petals, lemongrass, mint, pandan and butterfly pea, all from her own garden.

Jamie says that there's hardly anything that isn't edible in her garden.

Jamie Chua's house is now a model of sustainable living

During the lockdown, Jamie would spend around three hours labelling the plants and fertilising them.

Even though things have started opening up now, she has not been travelling and she still follows her morning ritual sitting in her garden with her morning cuppa.

While she is in the garden, Jamie loves the time she gets to spend with her silkie chicken or pick up fresh eggs.

Sustainability in planting and buying plants

She also shared that even though she has a gardener who comes over every week and he prunes grass and trims the tall trees.

During her free time, Jamie spends time reading and researching plants that are growing in her garden.

She's also become more aware of sustainable living and that means being wise about spending on plants.

She shared that a few months ago, she saw a Japanese maple tree that was about 1.5m tall. It cost about $800+ for that small plant! Instead of adding it to her garden, she decided to pass on that because she knew the plant would not be able to survive.

"You got to know what works and what won’t, and not waste your money on plants that are not going to work," shares Jamie.

She has quickly become the most famous animal lover in Singapore

Jamie says that she always wanted a peacock and is still considering it. But, she shares her inhibition that even though they are nice to look at, but they are very smelly and quite aggressive. "They are not lovable like my silkies and you can't carry them. Plus, they are so expensive, around $5,000. So if they fly away?"

She said that she also wants a pig, but doesn't know where to buy it from. She is also doing her research to find out if she would require a special permit to keep one. Jamie wants to build a house for the chickens, instead of buying the ready-made ones.

Even though she is really happy with how her garden looks, she said she will continue to curate it better when she gets a new place to stay.

Incubating eggs laid by her silkies...

While Jamie was always an animal lover, her affection towards them has become more pronounced now that she owns silkies herself. In fact, she is also advocating this type of sustainable living to her friends.

Jamie shared that she is now trying to breed them for her friends who are interested to keep chickens too. (For those who are not aware, under Singapore Law, it is legal to keep up to 10 chickens, if you stay in a private residence.)

She plans to keep one or two for herself and give the rest away.

Jamie Chua is clearly leading the way for sustainable living and showing her fans exactly how to do it too.