Weight loss transformations can be pretty amazing, as viewers of popular reality shows such as The Biggest Loser can attest.

More recently, netizens were astounded after one Japanese man who documented his weight loss journey on YouTube posted his amazing before and after.

Besides dropping the weight of one human being (68.5kg), netizens were amazed by his model-like looks that surfaced after he shed the weight.

Japanese YouTuber Ruibosu weighed 140kg at his heaviest a year ago, just before he embarked on his weight loss journey in September 2019.

Promising to go on a "final diet of his life", he started documenting his exercises over the course of the next few months.

In a video summary released two weeks ago, the 170cm tall man showed his transformation journey where at the end, he looked like a completely different person.

The video has so far garnered close to 2.5 million views.

He dropped exactly half his body weight to weigh in at 68.5kg after 11 months, and his body fat percentage also decreased from 42.9 per cent to 18.6 per cent.

According to SoraNews24, he did whatever exercises he could manage at first, which included static workouts like planking and situps. He then moved on to lifting weights and took up kickboxing to drop the pounds further.

Even when it rained, a disciplined Ruibosu found the motivation to work out on his rooftop.

With a combination of exercise and a diet plan, he successfully met his goal to shed about 5kg every month.

While we couldn't find much information about what he ate, Ruibosu shared in one video that he cut fruits from his diet for the first 200 days, and ate rice and chicken almost every day.

In a Twitter response to a follower, he let on that dieting was not without some struggle, admitting that "I found it hard to control my appetite" and "it was tough, especially for the first two months".

But he stressed that as he was "considerably fatter then a normal person", he had reached a point where he really had to lose weight. He urged others not to overdo it and to "lose weight in a healthy manner".

After several months, the results showed and by the 11th month, he weighed in at 68.5kg - half of his original body weight.

His determination and amazing transformation drew praises from netizens.

They marvelled at how he looked like a completely different person, possibly also because he ditched his trademark glasses halfway through the process. 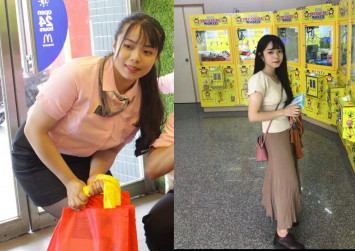 Health practitioners generally advise that one should lose weight at a slow and steady pace, with the recommended amount of weight loss per week at between 0.45kg and 0.9kg.

Those who have a lot of weight to lose may be able to get away with losing weight at a more rapid pace, at least initially.

Studies have also shown that those who lose weight slowly and steadily are more likely to keep the weight off in the long term.