Love fried chicken so much you can eat it every single day for the next year?

Singer, actor, and fellow fried chicken lover, Taufik Batisah, has just the challenge for you -- provided you're able to take the heat.

The towkay of fried chicken joint, Chix Hot Chick'n, recently sat down for a chat with AsiaOne where he spilled the deets (details) on how to win one year's worth of fried chicken from him.

Located along 1 Jalan Pisang Road, his halal-friendly restaurant was opened last year in August, specialising in Nashville style fried chicken dusted with some of the spiciest peppers in the world. 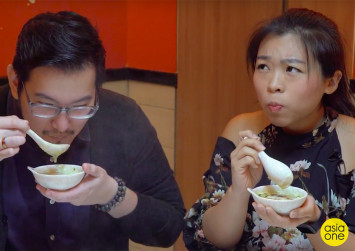 The menu has four levels of spiciness, ranging from Mild Spiciness (for those who can't take spice), to Insane Hotness that's guaranteed to make you sweat.

Tried the Insane level before and felt that it was no kick? There's an additional fifth level aptly called Off The Menu, that I had the chance to sample before surrendering to the spice gods.

Watch as I attempted the challenge and waved the white flag in a matter of seconds.

HAVE AN IRON STOMACH? WIN A YEAR'S SUPPLY OF FRIED CHICKEN

Think you can take your spice better than me? You might want to read on.

One winner who will walk away with a Chix Hot Chick'n tote bag (with gifts inside!) and get this: a meal on the house every month for the next one year.

Be warned though, like a true businessman, Taufik is not making the prize easy to win.

Eight contenders will be made to finish three "Off the menu" jumbo chicken tenders in the fastest time possible with no water allowed.

To apply, slide into their DMs (direct messages) on Instagram or Facebook (@chixhotchicken) before entries close on July 15 and tell them why you should be picked.

Chix Hot Chick'n is located at 1 Jalan Pisang. They are open Monday to Saturday from 12-9pm.