We try to recreate the Taiwanese KFC Krispy Kreme burger

A burger with a KFC chicken patty and 2 Krispy Kreme donuts for buns has landed in Taiwan. Since we can't find it here, we decided to make our own to see how it tastes.

We're only day three into the new decade, but a promising new fast-food item is quickly taking the internet by storm.

The Chinese webspace is abuzz with KFC Taiwan's newest (and possibly most ambitious) collaboration to date: the Krispy Kreme doughnut burger.

Each a la carte sandwich costs NTD 139 ($6), and pictures of the thicc slab of fried chicken cushioned between two fluffy original glazed halos have us salivating all over our laptops.

However, even within Taiwan, this sinful sandwich is pretty elusive and hard to get your hands on.

According to one YouTuber, the burger was sold out across the island on the first day of its launch, and he had to take a number and wait 30 minutes to get his hands on one despite arriving an hour before KFC started selling the burger.

Available only in 11 stores throughout Taiwan, a mere 60 doughnut burgers will be available at each store till the promo ends on Jan 9.

If you happen to be on holiday in Taiwan while reading this, here are the participating outlets where you might be able to get your hands on one:

CAN'T GET OUR HANDS ON IT? WE MAKE OUR OWN

Since the launch was only announced on Dec 27, there's zero chance that any of us in office would be able to taste the finger-licking potential of this combo.

So we did the next best thing — attempt to make one of our own using two Krispy Kreme original glazed doughnuts and KFC's Zinger patty since it was the closest looking to photos we've seen of the burger. 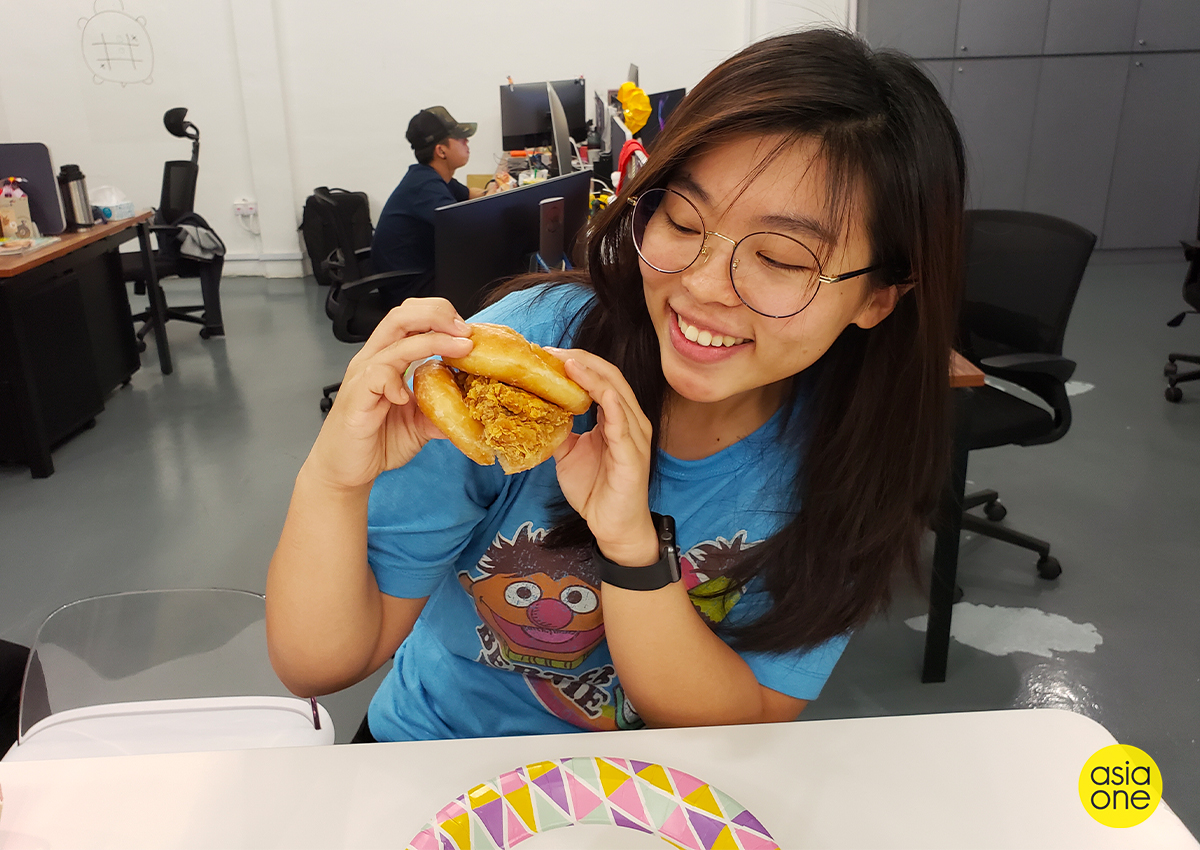 Total monetary damage for this experiment: $20.50 ($15.60 for six original glazed Krispy Kreme doughnuts and $4.90 for a Zinger burger sans sauce).

This worked out to each burger costing $10.10, more expensive than the ones sold in Taiwan.

From pictures on social media, it doesn't seem like there was any sauce used in the burger, so it was a clear-cut assembly of the two items. 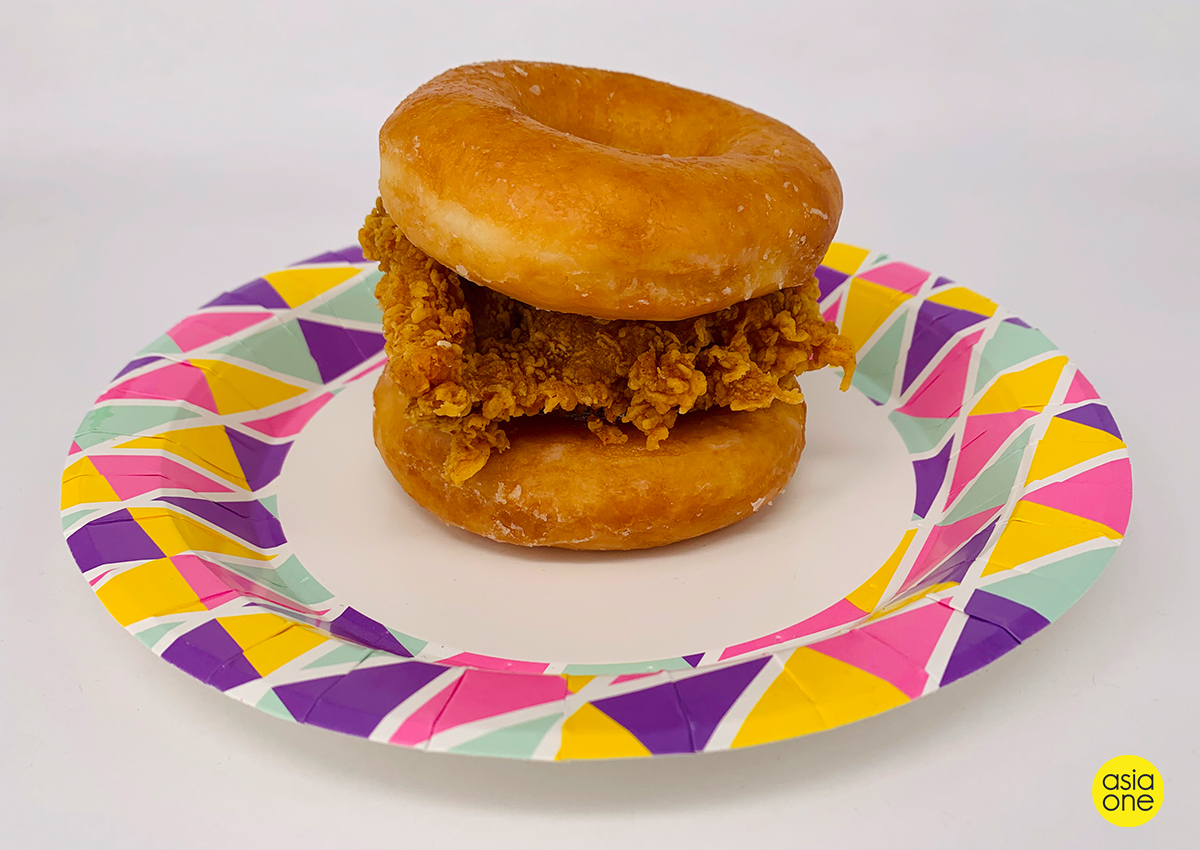 "The doughnut is really sweet and there's no more lettuce." KFC: "The taste of the spicy chicken patty will neutralise the sweetness of the doughnut so if there's lettuce it'll taste weird." PHOTO: Screenshot from Facebook

Admittedly a strange combination, both distinct flavours managed to stand out upon first bite and neither sweet nor salty overpowered.

A combo that somehow complemented each other, the spice of the Zinger also provided a fiery aftertaste but those who can't take the heat might want to choose a different patty if they're recreating the burger. 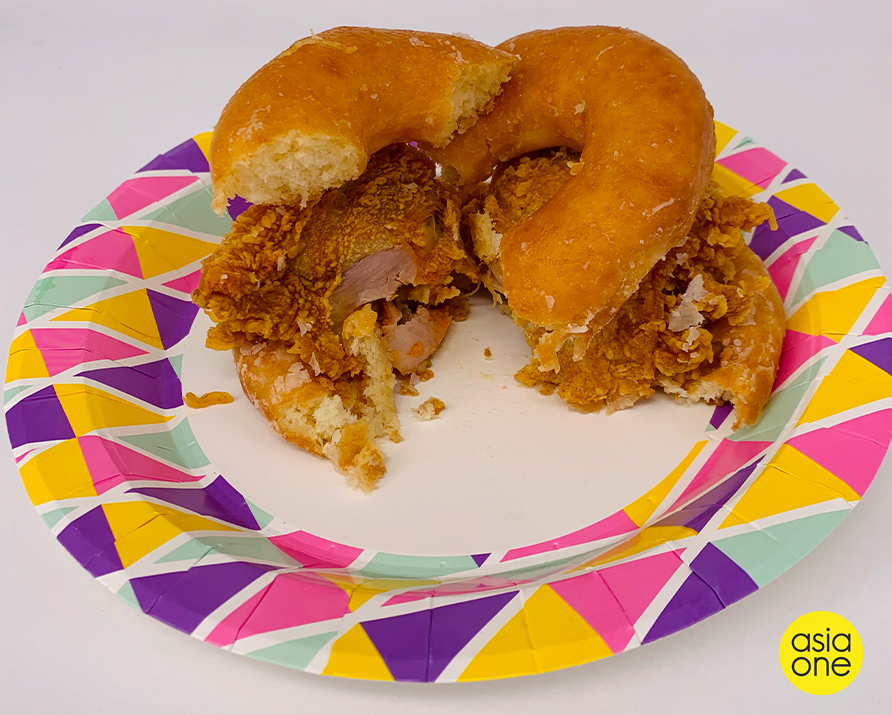 How the burger looks like when cut in half. PHOTO: AsiaOne

Ultimately, the sweetness of the Krispy Kreme glaze and the size of the burger proved to be too cloying and it was hard for one person to finish the entire burger.

Additionally, because there's nothing to meld the flavours together, some colleagues who tried it also said they'd rather eat chicken and doughnut separately.

Read Also
US YouTuber raves about Singapore's McSpicy, calls it the burger to end all #ChickenSandwichWars 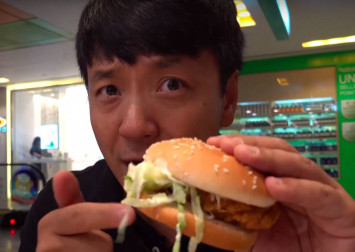 For those who are afraid the doughnuts might be too sweet, one colleague mentioned it might better to split one doughnut in half (instead of using two), so that's it's also cheaper and easier to eat.

With two doughnuts, the burger amounts to 645 calories a pop (according to stats from myfitnesspal), so we reckon it's a novelty item better to be shared with friends if you're giving the burger a go.

While it looked good in pictures and didn't taste bad, it's a little too much effort to recreate again and not something I think I'll find myself craving for, especially since it's more expensive than your regular run-of-the-mill burger.

Will you give this one a go?