Growing up, I’d always had vague ideas of what I wanted my first “adult” home to be. Something bright and airy, with beachy vibes, maybe a reading nook next to a bay window in a big living room.

All those notions of grandeur, though, came screeching to a halt when I first appraised — and I mean properly appraised — the cookie-cutter layout and 90sqm that is the HDB BTO flat.

I remember the first time I ever walked into a new four-room flat. My first thought was – “How am I going to raise kids in here?”

It was a thought quickly followed by shame, because there are parents who have raised kids in much worse conditions and have never complained about it. But it was a thought that crossed my mind nonetheless, and I know I’m not alone in thinking it.

If you’ve been following the BTO launches of late (or ever), there’s a reason the five-room flats get snapped up first. That extra space in the living area means so much more in storage, a place for kids to play, and ultimately raising a family.

Case in point: one of my good friends has an inflatable tent and a miniature slide set in the area behind the sofa in her five-room flat, and I know for a fact that that’s impossible in my four-room unless I want to trip over toys every time I try to get to the sofa.

Some of my peers have overcome the space issue in various ways. There’s hacking through, of course, whether it’s the kitchen or the bedroom, which creates a visually larger space. There’s also the option of upgrading to a bigger home when the time comes. 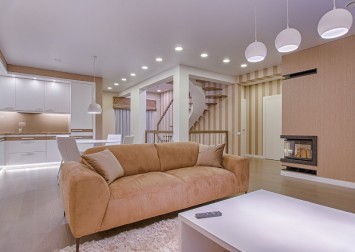 Since I can do neither at the moment, I have to find creative ways to overcome the lack of living space. While the issue of playmats and slide sets is still a long way off, we’re already adjusting to the idea of a smaller living space, helped along by modern technology.

Netflix watching, for instance, is no longer a living-room activity as it was in the past. These days, the default place is the dining table.

This being a small home, family bonding in the living area is also unnecessary, since we can hold a conversation even if one of us is in the service yard and the other in the bedroom. I suppose the entire home is one big living room now, if you think of it that way.

But let’s be honest with ourselves: having a big living room, or a living room at all, is a privilege. People all over the world have adapted to life without this separate area set aside for relaxation and entertainment, and so can we.

With these changing times and an evolving definition of what home means, perhaps in twenty years the living room will even have become a dated notion, replaced by home offices and playrooms. Who knows?