All factors have been designed without compromise, so this is still a capable SUV off-road, whilst also preserving the trademark on-road Maserati experience.

Developed at the Maserati Innovation Lab in Modena, the new SUV will be manufactured at the Italian automaker's Cassino plant.

At launch, European buyers will have several powertrain options to choose from - namely a choice of conventional internal combustion engines and a hybrid powertrain, with an all-electric variant scheduled to join the line-up for the next model year.

Three variants are available at launch. The GT and Modena variants, both powered by four-cylinder mild hybrid engines developing 300hp and 330hp respectively, and a perkier version that packs a high-performance 3.0L 530hp V6 that also features in the MC20.

The new SUV boasts best-in-class honours in terms of interior space, driveability, handling and acceleration (0-100 km/h in 3.8 seconds for the Trofeo variant), top speed (285 km/h – again on the Trofeo). 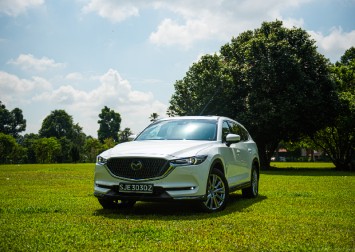 On a design front, it embraces Maserati's new visual symbol, which was first introduced with the MC20. The hallmarks of this design language include a low and imposing front grille, paired with bodywork that features fludic visual forms.

In the rear, the boomerang taillights are inspired by the Giugiaro 3200 GT, and fit in with the trapezoidal line, made even more striking by the coupé effect of the cabin and its finish like a sports car.

On the inside, the Grecale features Maserati's traditional clockface, though it is now digital for the very first time. It is also multi-functional, serving as an in-car concierge that can be operated via voice commands.

All the new fangled technology can be operated via the three displays in the cabin - the large 12.3” central screen, which is the largest ever seen in a Maserati, an 8.8” display for the extra controls and a third screen for the passengers in the rear seats.

Pricing for the Maserati Grecale is not available at the moment.

You can option your ideal Grecale via its official configurator here.