The tender for the 57,453.9 sq ft site was awarded to Hanbaobao, Singapore licensee of McDonald's.

SINGAPORE - Happy meals will still be a treat for fans of McDonald's outlet in Ridout Tea Garden in Queensway, with the 32-year-old branch reversing a previous announcement of closure in December.

A check on the Singapore Land Authority (SLA) website showed that the tender for the 57,453.9 sq ft site was awarded to Hanbaobao, Singapore licensee of McDonald's. Its bid of $40,000 per month in rent was the second highest.

Thirteen other food and beverage or retail companies also bid for an initial three-year tenancy, which can be renewed for two further periods of three years each.

An SLA spokesman previously told The Straits Times that bids will be evaluated with half the overall score assessing the concept quality and the other half the bid price.

The site - which has two units, one of which is occupied by McDonald's - has been tenanted to real estate developer Hayman through an open tender since April 1, 2016. Its tenancy will be expiring on Dec 31, 2021.

McDonald's told ST in April that it would cease operations there in December upon the expiry of its tenancy agreement.

In response to queries from ST, a spokesman for the American fast-food chain said on Friday (Sept 17) that it is excited to be able to continue serving regular and new customers in Ridout Tea Garden. 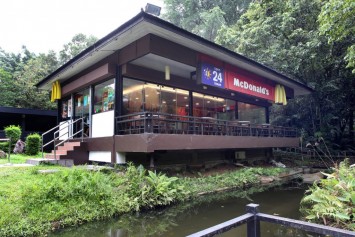 "It's a privilege to have been part of many customer memories here at this iconic restaurant over the last 32 years."

The spokesman did not elaborate on the company's change in decision to stay on.

The Ridout Tea Garden outlet is among the oldest operational McDonald's branches here, having opened in 1989. The single-storey eating house pavilion, built next to a much-loved pond, initially housed a KFC outlet from 1981.

It is unclear whether McDonald's will be occupying both units.

ST visited the Ridout Tea Garden on Saturday and found that the other unit was occupied by a Japanese buffet restaurant that just opened on Thursday.

Queenstown resident Ethan Ong, 24, a student, is relieved that McDonald's "will still be there because there is no other place like it". He is glad that "kids can still experience running around the pond".

"It's still a place I swing by on the way home, or if my family is craving supper on weekends, it's our go-to."

A housewife, who wanted to be known only as Madam Kwek, 73, said she frequented the outlet when it opened in 1989, as she used to live in the area.

"I'm glad that iconic place gets an extension of life. It's a signal of hope that the greenery along that short stretch of Queensway can stay a little longer," she added