Mini Electric, Cooper S, and Clubman get Resolute, Untamed, and Untold editions, going on sale in Singapore in August 2022

Singapore - Mini has just launched a series of special edition models with a car display at Vivocity's central court. The display will run until Aug 10, 2022.

These new editions come hot on the heels of the just-announced Mini Pat Moss edition. As for the new cars announced, the Resolute Edition is available only on the Mini Electric, and Mini Cooper S in three and five-door forms.

Mechanically identical to the standard Mini variants with 2.0-litre turbocharged engines with 178 horsepower apiece, these are essentially trim-level specials that continue the Mini tradition of releasing unique models every couple of years in the model lineup.

These include the headlight surrounds, radiator grille and rear lights, side scuttles on the front side panels, handles of the doors and tailgate, air intakes in the front apron, and the fuel filler cap.

Logos and model lettering are finished in Piano Black, In addition, there is also a black strip running around the lower edge of the windows.

The Resolute edition is finished in Rebel Green, a colour previously only available on the top-spec Mini John Cooper Works. This paintwork is combined with a Pepper White roof and exterior mirror caps for visual contrast.

Both the bonnet stripes and the door sill panels of the Mini Resolute Edition feature a pattern of parallel lines with a colour gradient between a light and a dark shade of gold as well as the lettering "Resolute".

Inside the car, the seats are finished in Carbon Black with contrasting stitching and piping, as well as a perforated Union Jack motif on the headrests.

The interior surfaces designed for the Resolute edition feature a light shade of gold forming a pinstripe pattern on the black background of the surfaces.

Available only on the Mini Cooper S Clubman and priced at $243,888 with COE, the Untold edition is a slightly more understated design with Sage Green metallic paintwork, available for the first time on the Clubman, and a body kit inspired by the one on the John Cooper Works version.

The surrounds on the lower body sections are not in the usual Mini black, but a dark shade of green for the first time. Look over the roof and you'll see five narrow, parallel sport stripes running centrally across the roof and onto the bonnet.

The side scuttles have a specific stripe pattern that is also repeated on the door sill trims as well as in the logo projected from the door mirrors.

The Untold edition Clubman rolls on 18-inch wheels with surfaces in Jet Black and Refined Brass combination. As you might have guessed these are again unique to this edition.

This colour scheme runs across the car to the radiator grille surround and the radiator crossbar, as well as for the "Clubman" lettering on the split doors at the rear.

In the cabin, Sage Green seats tie the colour scheme together, and the colours extend to illuminated accent strips and interior surfaces with a subtle striped pattern and green colour scheme.

Another small visual accent can be found on the surrounds of the air vents in Refined Brass. The bottom spoke of the Nappa sports leather steering wheel as well as the floor mats feature an edition emblem as well.

The biggest model in the Mini range gets the Untamed edition treatment and has a list price of $250,888 with COE. Known as Mini's all-wheel drive SUV, the Untamed Countryman is finished in Momentum Grey metallic paint.

The body colour extends to the lower air intake surround including the underride guard, air curtain inserts in the front apron, as well as the side skirts, reflector inserts, and the lower insert in the rear apron. 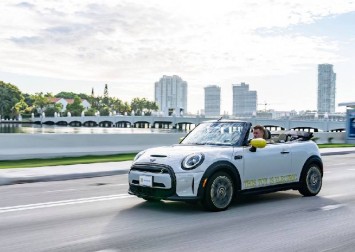 Logos on the bonnet and tailgate are in black lettering, and graphic elements of the emblem are also combined with a background in body colour.

Further identifying designs include four diagonal stripes in Frozen Bluestone in the lower area of the doors, with 18-inch wheels in Untamed two-tone design.

The Piano Black Exterior package adds further black contrast features like the surrounds of the radiator grille, headlights, taillights and side scuttles, the door handles, and tailpipe trims.

In addition, the side scuttles and door sills feature a graphic pattern inspired by a mountain landscape and the "Untamed" inscription.

The cabin is finished in Highland Green combined with blue and green contrast stitching on the surfaces of the sports seats. A large-scale graphic with the illuminated Untamed lettering serves as a motif on the dashboard panel.

Just to further drive home the special edition point, more "Untamed" lettering can be found on the seats and in the bottom spoke of the Nappa sports leather steering wheel.

This article was first published in CarBuyer.