Another celebrity F&B joint has arrived on our sunny shores.

The fried chicken chain already has over 45 outlets in Taiwan.

For the Taiwanese comedian, who told us at Monga's Sept 27 preview that Singapore is like his second home, bringing Monga here was a no-brainer.

Taiwanese comedian Nono has finally brought his Monga Fried Chicken Singapore 艋舺ㄟ雞排 chain to Singapore, with the first outlet opening at Jem on Sept 28. Here’s a first look at their extra-thick chicken cutlets that are Mark Lee and Jack Neo approved.

And the recent F&B mogul has some bold plans for expansion.

Nono joked, "We'll open everywhere in Singapore. Every family will be able to go downstairs and buy it."

For now though, the 48-year-old is starting small, with one outlet in Jem in the west.

Singaporean audiences might be more familiar with Nono as a comedian and frequent sidekick to host Jacky Wu, but he's a certified foodie.

If you need any proof that Nono is serious about his chicken, here it is.

At Monga's preview, Nono got down and dirty in the kitchen, switching out his sharp blazer for an embroidered apron to show off his cooking chops.

"We usually sell this for $6.90 but I'm selling this for $69," Nono joked as he sprinkled salt and pepper on a perfectly-fried chicken fillet. 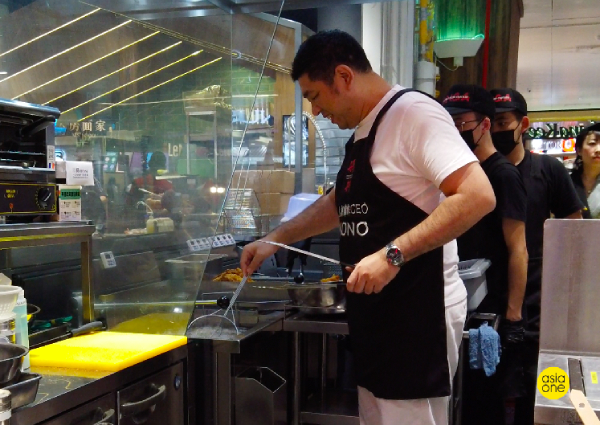 According to Nono, the frying temperature and duration at each Monga outlet are carefully calibrated to ensure that every single chicken cutlet is equally tasty, no matter where you buy it from.

In fact, Monga's outlets outdoors even adjust how long they fry the chicken based on whether it's summer or winter.

When asked how long he had taken to learn the ropes, Nono, ever the jokester, bragged that he was able to learn how to fry chicken in five minutes thanks to his "genius and cooking talent" — for your reference, the usual training period at the store is a week.

He might be joking but this writer managed to snag one of the chicken cutlets that Nono had fried up and it certainly did not disappoint.

Although Monga is named after one of Taipei's oldest districts, their chicken cutlets are unlike those from any other Taiwanese brand.

Monga's claim to fame is their extra-thick chicken cutlet. Comprising breast meat, each slice is at least 2cm thick to ensure that it remains juicy and tender even after frying. 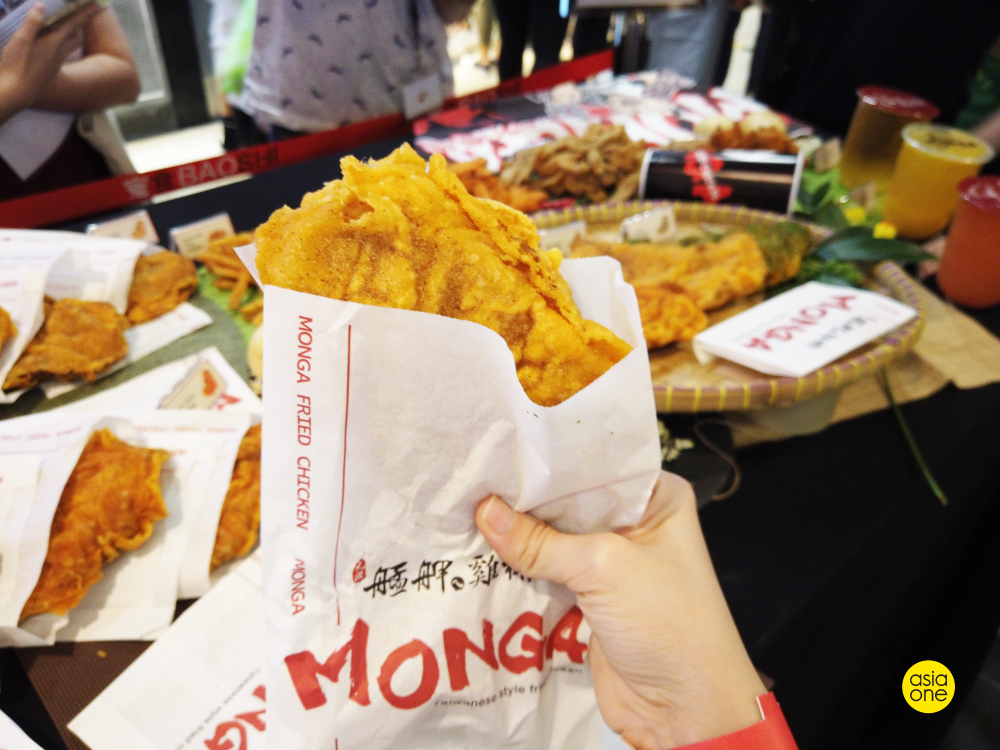 The King ($6.90), seasoned with salt and pepper, perfect for all of you fried-chicken purists. 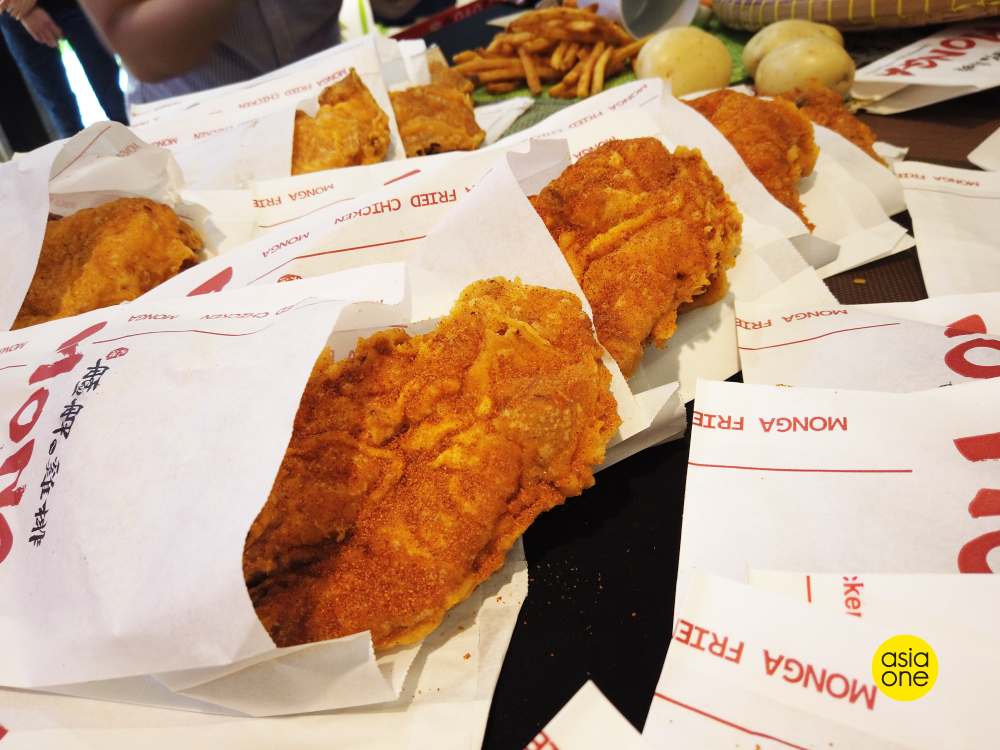 Hot Chick ($6.90), dusted with chilli paprika powder for a hint of spice.

"After you eat this, you'll become a hot chick," Nono quipped. No money-back guarantees though. 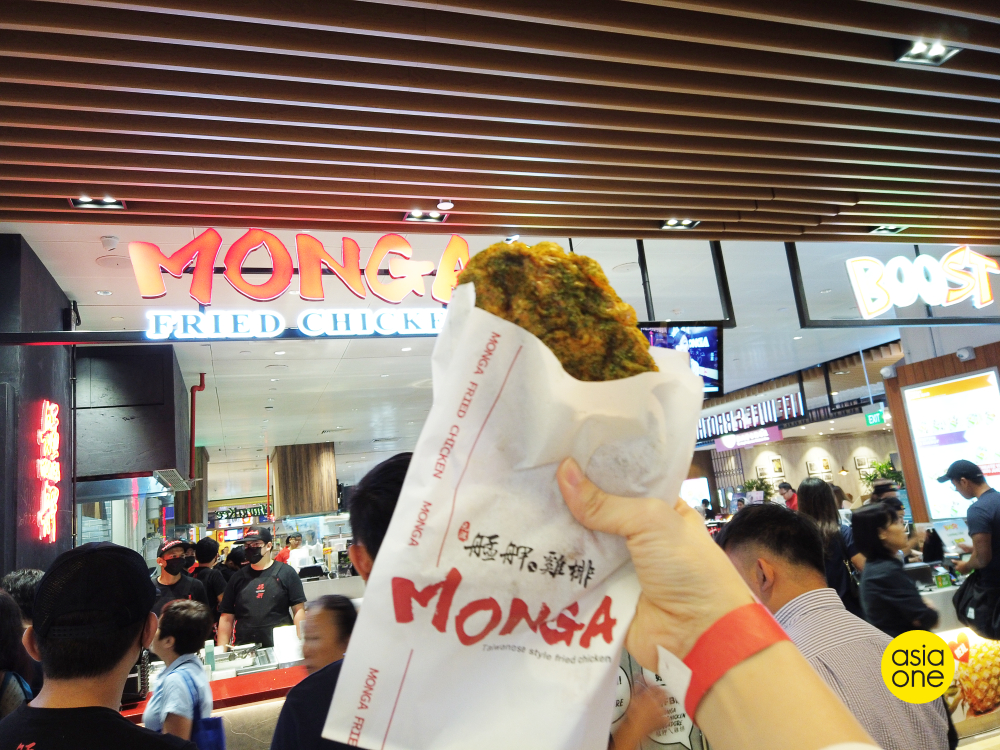 And The Taiker ($6.90), with a unique sweet glaze and seaweed flakes. Nono claimed that eating this flavour would leave you looking as handsome as actor Chase Tan, who was in attendance. Again, no money-back guarantees.

While they're a little pricier than other Taiwanese fried chicken joints like Shihlin Taiwan Street Snacks, Monga's chicken cutlets are big enough for a full meal — and then some.

If you are craving a quick snack, there is also a variety of sides, all fried, of course. 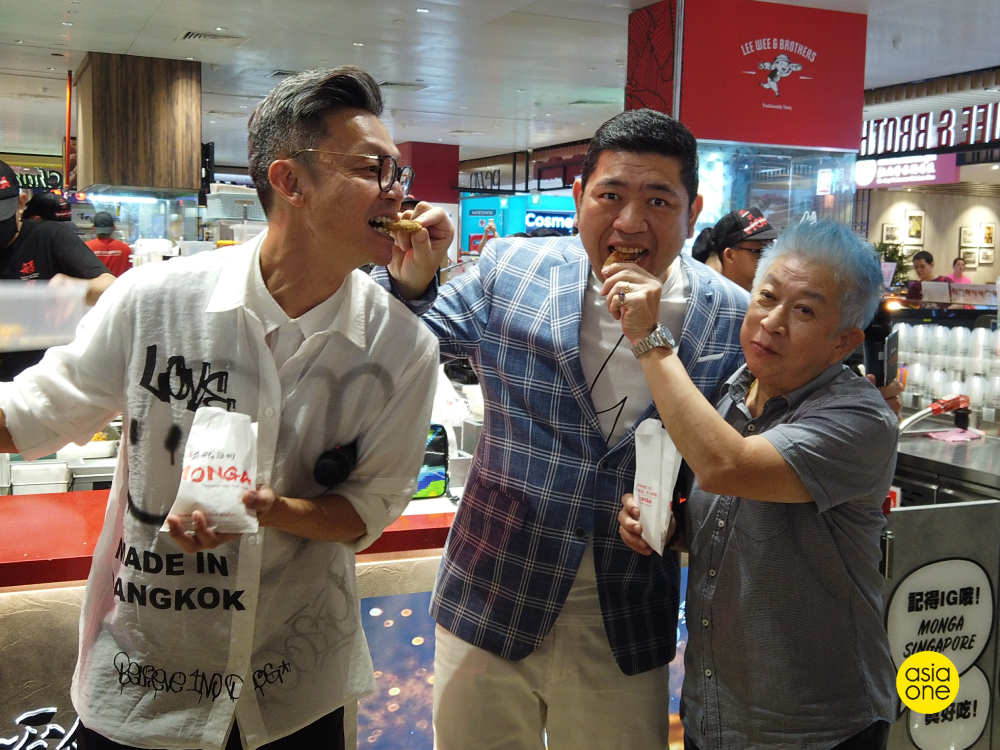 Monga just landed on our shores but already has no shortage of famous fans. Nono's celeb pals Jack Neo, Mark Lee, Henry Thia, Marcus Chin and Chase Tan graced the preview event, trading barbs and cracking jokes that had everyone in stitches.

Nono had a winning movie proposal for director Jack, saying, "You should film a sequel to Money No Enough called Chicken Cutlet No Enough. I'll sponsor the breakfast, lunch and dinner for your crew.

"I've waited six years to make that joke," he added.

There's no news on whether Jack is taking Nono up on the offer, but he and Mark didn't miss the chance to plug their upcoming concert Yesterday Once More, urging members of the public to book tickets for the Oct 27 show on Sistic — and grab a chicken cutlet along the way.

Jokes aside, Mark, who has his own chicken rice chain 13 Stages, was a big fan of The King.

The comedian said, "You can really taste the aroma from the fried chicken... and its original essence."

For national basketball player-turned-actor Chase, all three flavours were winners in his book.

"I really like all three. Also it's all chicken breast and isn't greasy. It's great for young people who like to go to the gym," he explained.

If you can't wait to sink your teeth into Monga's chicken cutlets but don't see yourself making a journey to the west, don't despair — you might get an outlet near you soon.

"Some of our friends in the east have been looking forward to our opening. But we're in the west. It's quite far... We definitely have to open [an outlet] in the east. It's in the works," Nono assured.

Nono also revealed that the brand is working on making their food available for delivery.

Until then, you would have to join the crowd at Jem to get a taste of Monga's fried chicken.

Monga will be giving out limited-edition merchandise to the first 40 customers daily from Sept 28 to Oct 4.