'Mumbai da, India!' star on leaving showbiz for law - and why he's back on screens

Viral Video Stars is a biweekly series where we hunt down viral icons. What's it like to be famous? What have they been up to? We catch up with them to find out all about life after viral fame.

Some 13 years ago, he achieved overnight virality when he played a no-nonsense restaurant owner in an M1 advertisement, coining the iconic "Mumbai da, India!" punchline. But that wasn't Vadi PVSS' first brush with fame.

In fact, he was a household name among the Tamil-speaking community long before the 30-second advertisement introduced him to the masses.

When we meet, he introduces himself as an artist and lawyer. But those two words hardly encompass everything he's been up to in his 51 years.

From theatre to showbiz and teaching, as well as a nine-year stint at the Attorney-General's Chambers (AGC), Vadi has had a pretty eventful career.

But why did he all but disappear from the local showbiz scene in 2012? We catch up with him to find out what he's been up to.

Viral fame came out of the blue

As we revisit the highlights of his career, Vadi pulls out binder after binder of news articles featuring him — all painstakingly compiled by his father, he tells us.

In particular, a 2008 Today clipping pronouncing him "a star 25 years in the making" catches our eye.

Although he has been acting in Tamil programmes since he was 10, it was a conscious choice to stay away from English programmes in the earlier years of his career, Vadi tells us, explaining that he wanted to avoid too much exposure and fame.

On the rare occasion that his then-students recognised him, he would simply deflect their questions.

"I used to lie to my students when I was teaching," Vadi says with an impish grin. "I'd tell them, 'Oh, that's my twin brother.' And my students were always slightly confused. And that's how I got away with it."

Back in 2008, he was still teaching Economics and Theatre studies full-time at Raffles Institution (then known as Raffles Junior College) while acting on the side.

He had even gone through periods where he contemplated quitting his television work to focus on teaching, he confesses.

But when director Yee Chang Kang, a friend of his, approached him to act in the M1 advertisement, he agreed without thinking too much of it.

Unbeknownst to him, the advertisement would explode in popularity, clinching a Viewer's Choice award and expanding his fanbase exponentially.

Vadi, who had won several acting and showbiz awards prior, including a Pradhana Vidzha, which recognises the best of local Indian television, was already used to the Tamil community coming up to him. But for the first time in his life, he had non-Tamil-speaking folk coming up to him for pictures, he says.

The advertisement also took off among his students.

"Sometimes when I tried to reprimand them, they would say 'Mumbai da, India!" And the whole class cracked up," he recounts.

With the increase in exposure came numerous love calls and offers for English programmes, but Vadi turned down most of them.

"[The advertisement] opened up a lot of doors, but I couldn't go through the door because I was still teaching. I had a full time job," he explains.

Even then, he managed to sign on to appear in 2008 comedy series Calefare, and The Pupil, a legal drama which began airing in 2010.

But instead of capitalising on the momentum he'd built in the showbiz scene, Vadi decided to take the road less travelled in 2012, quitting teaching to enrol in a two-year Juris Doctor (JD) programme in Singapore Management University.

Leaving it all behind for law school

The drastic career change stemmed from a case of mistaken identity, Vadi shares.

"I mean, if I can be of help, why not? I thought, let's do a law degree on the side, part time," Vadi, who'd had an interest in law even as a child, recounts.

"But then after that, I jumped into it full time. And I thought, why not a career switch? And it was terrible."

Read Also
She went from being a singer to software engineer, thanks to Covid-19 pandemic 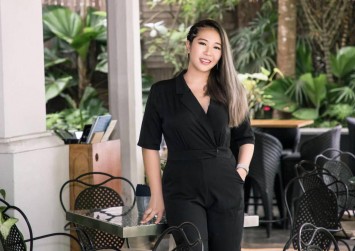 It was a gruelling two years with "literally no break", Vadi tells us. And when he finally graduated, he decided to work for the AGC to gain more experience and training in the field.

During this period, he cut down on his acting, only accepting a select few Tamil gigs and making time for them by taking unpaid leave.

Even with his significantly reduced presence on TV, he still had detractors who would go as far as writing complaint letters to the AGC, he says.

"They were saying, 'Hold on this guy is a Deputy Public Prosecutor and he's acting, getting on TV."

As a civil servant, he was also more careful about the roles he accepted, staying away from projects that would attract too much attention.

But fans need not despair. He'll be back on our screens soon enough, he teases, although he can't share exactly what's in the pipeline yet.

After leaving the AGC in May, he's now looking to establish his own private practice, which has always been a dream, he says, and jump right back into acting and theatre.

Despite the seven-year break, growing the local theatre scene has always been one of his aspirations, says the playwright, who's penned plays such as Shanmugam: The Kalinga Trilogy.

And for anyone out there considering a career switch, Vadi has some sage advice.

"The phrase that kills a lot of dreams is 'What will others think?' Because at the end of the day, when you start to live for others, it's a bad thing.

"And I think what I'm doing now, and what I've done before, is to spread a lot of cheer and laughter."