NDP2021 theme song The Road Ahead is like great rojak: Refreshing and moreish

MRT track as a conveyor belt for local delights - ingenious!

It always irks me when people use the word rojak to mean hotchpotch or mishmash, which are words referring to a confused mixture - because rojak is anything but a thoughtless mess.

Think about your favourite plate of rojak and how seemingly disparate ingredients come together so perfectly to create a piquant blend of flavours and textures that is at once refreshing, savoury, and moreish.

And that's exactly what this year's NDP2021 theme song is like.

The Road Ahead merges the vocals and musical stylings of four local artists known by their single names (all the great ones are always mononymous ok): Sezairi, Shye, Shabir, and Linying, who co-composed the song with producer Evan Low.

At its core, the song is about counting on one another in challenging times. Reflective and poetic lyrics (that never stray into saccharine or hackneyed territory) are delivered with a decidedly young and modern touch.

Most importantly, the chorus is simple, melodic and catchy:

"See this island, every grain of sand Hear this anthem, it’s the voices of our friends Come whatever on the road ahead We did it before, and we’ll do it again"

We break down the ingredients of this praiseworthy portion of good rojak:

Not to mention, the 27-year-old is as cool as one! She starts the song off with her pure, unadulterated voice, and is ever-present but unobstrusive - just like how the chunks of cucumber in rojak are there but not there, yet will be sorely missed if they're not added.

Wah seh: She's been named one of Spotify Asia’s 25 Most Influential Artists Under 25, and has received critical acclaim from Billboard and the BBC.

Most impressively, her song writing work for artists in Europe earned her the 2019 COMPASS Award for the most royalties accrued on an English song.

We truly mean it when we say this singer-songwriter's voice is as clean, fresh, and crisp as good, snow-white bang kuang. Just listen to his soaring pipes when the chorus hits.

And just like the way cucumber and turnip chunks go so well together in rojak, Sezairi's sweet falsetto perfectly matches Linying's dulcet tone.

Wah seh: The 34-year-old was the winner of Singapore Idol Season 3 in 2009, and has continued having musical success with hits like It's You and Raindrops.

A-meow-zing fact: He and his wife are paw-rents to six cats - Caviar aka Matthew, Champagne aka Chad, Fifi, Luna, Reese aka Chonker, and Khaleesi.

ALSO READ: This year's NDP theme song is out: The Road Ahead to be performed by 4 singer-songwriters

The best part about having you char kway in rojak is the pleasant surprise you get when you bite into a piece - and, contradictorily, it always seems to be chewy yet crispy in equal measure, which only adds to the pleasure.

Taking the bridge solo, Shye's coquettish delivery ups the cute and whimsical factor, and leaves us wanting more - we like!

Wah seh: Although only 18, the singer-songwriter and producer has already appeared in indie music festivals like Singapore's Baybeats and Kuala Lumpur’s Urbanscapes. Just take a listen to her playlist above and tell us she's not Singapore's very own Billie Eilish.

Rojak is not rojak without the gravelly, chunky crunch of chopped peanuts. What can I say, I'm (pea)nuts for the gruff baritone of this Kollywood star.

His earthy, emotional chorus at the 2:33 mark gives the preceding high notes gravitas, and is a robust and rugged counterpoint to the other three singers' parts.

Wah seh: No stranger to NDP (this is Shabir's fourth time participating in it), the prolific 36-year-old singer, actor, Kollywood producer and do-gooder composed Singai Naadu in 2012, prompting Prime Minister Lee Hsien Loong to gush in a Facebook post: "Among our National Day songs, Singai Naadu is one of the most soulful and heartfelt."

Most recently, his song Aayizhai was chosen by India’s top radio station Fever FM (which has a listenership of over 14 million) to be amongst 14 indian independent songs to be played across the country on World Music Day (June 21).

And he was the only Singaporean artist in that list!

And finally, the good stuff that binds the chopped ingredients together to make a great rojak - the hae ko (or prawn paste). Kudos to Evan, who co-wrote and produced The Road Ahead, for creating something so cool, refreshing, and relevant.

Directors Jerrold and Junxiang also deserve much praise for making this the first NDP music video to blend live-action and animation - why has this not been done before ah?! The result is cute and clever, while retaining the aww factor. 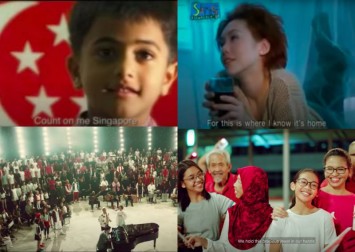 Wah Seh: Evan has played a part in the NDP theme songs and Parade Music since 2018, and most recently produced Inch Chua's first bilingual single, Do I, Do I.

Meanwhile, Jerrold and Junxiang's co-directed stop-motion short film Piece of Meat (2019), made its way to - get this - the Cannes Film Festival's Directors’ Fortnight, the Annecy International Animation Festival, and the Busan International Film Festival.

So there you have it, a wonderful rojak of an NDP song. We leave you with some screenshots from the music video of The Road Ahead. (Also, please use the word rojak positively from now on.)