Cafe hoppers and foodies alike will be glad to know that a new F&B destination has made a home for itself in Bugis.

Joining the slew of eateries at Haji Lane is Momolato, an 18-seater cafe that oozes tropical vibes and reminds us a little of Bali.

The establishment was founded by investment-banker-turned-chef Sharon Tay and has humble beginnings as a behind-the-scenes artisanal gelato supplier for hotels, restaurants and cafes.

Tay has also been honing her craft over the years — she spent some time in Italy learning how to make gelato and even emerged as the 2015 Asia Pacific champion of the Gelato World Tour Finals.

After a number of requests from their customers to open a brick and mortar store, Momolato, which previously hawked its treats online, has finally decided to take the plunge.

What makes the brand stand out from other gelato establishments in the market is their range of 18 gelato flavours that are both good for your tastebuds and waistlines.

Out of the 18 flavours, the six in their keto range are sweetened with healthier sugar alternatives such as monk fruit extract, stevia, erythritol, and allulose, making it safe for diabetics and people who are watching their sugar intake.

If you're not a keto fan, you can try their signature and premium flavours, such as the Kochi Yuzu Shiso, Ondeh Ondeh Sweet Potato Swirl and Roasted Sicilian Pistachio.

In addition, diners can look forward to seasonal cafe-exclusive flavours like Coconut Gula Jawa, Korean Strawberry Cheesecake and Red Watermelon Soursop. The price for each scoop of gelato ranges from $4.90 to $8.

If you want to jazz up your gelato for that Instagram-worthy shot, you can opt to have it served to you in a pandan leaf-wrapped cone which costs $1.50 to $3.

Other menu items include waffles and croffles — a fusion of croissants and waffles — that you can pair with your gelato. Prices for these range from $6.60 to $12. 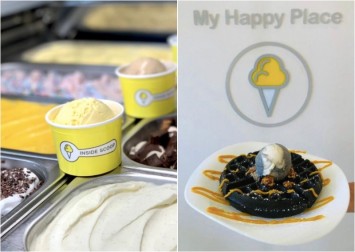 You can also beat the sweltering Singapore heat with Momolato's keto, sugar-free smoothies ($8) that come in refreshing flavours such as Mango Yoghurt, Avocado Coconut and Strawberry Cheesecake.

Some good news for night owls is that the cafe opens till 2am on Friday and Sundays, making it an excellent destination for some night-time nibbles. The best part is that since their gelatos are sugar free, you won't feel as guilty about eating here so late!

From April 12 to May 12, 8pm to 10pm, Momolato will also be offering their customers a complimentary beverage with every double scoop of gelato.

Opening Hours: Sunday to Thursday 12pm to 11am