From newspaper to joss paper: This woman quit her office job to help her parents run their kim zua business

Most people in their 30s are grinding away at an office job, but not Jamie Peh.

Instead, she's in the business of traditional joss papers and sticks.

When AsiaOne catches up with her over a Zoom call after a long day of tending the family business, it quickly becomes apparent that being your own boss is no walk in the park.

The weary 32-year-old tells us right off the bat that her job is "really tiring". But it's all worth it to keep the tradition alive, she says.

From corporate to kim zua

For the uninitiated — especially the younger generation — kim zua refers to the joss papers, incense and paper offerings that some burn for their deceased family members during the seventh lunar month, Qing Ming Festival and festive periods such as Chinese New Year.

Jamie tells us that her father founded Ken Hwat Joss Papers & Sticks over 35 years ago. And it was a family affair from the get go — Jamie, her mother and her brother would often lend him a hand at the shop.

While she had been helping him out since she was a child, she only got into the business full-time in May this year.

To do so, she had to quit her stable job at Singapore Press Holdings, where she worked for four years as an account manager.

The contrast between both jobs is night and day, she says. At her corporate role, she kept a regular nine-to-six work schedule on weekdays in an air-conditioned office. But now, she works both weekdays and weekends at a wet market and starts her day as early as 7am.

And while weekends are considered a period of rest for most people, it also happens to be the busiest period for the shop, which means that Jamie's social life has to take a backseat.

"I can hardly go out on Friday nights anymore because I have to wake up at 6am on a Saturday," she shares.

Additionally, working in the kim zua scene is extremely physically taxing — especially for a young woman like Jamie.

"It's labour intensive. You have to carry a lot of things and these are heavy goods that need to be loaded and unloaded into the shop," she explains.

On top of all that, she explains she still has plenty of learning to do on the job despite having worked there since she was a kid. Back then, all she had to do was help pack the goods. Now, she has to serve customers, which requires her to know each products like the back of her hand.

This includes learning about the different types of joss sticks and papers, the prices, as well as the various products used during special occasions like the seventh month of the lunar calendar and Qing Ming Festival.

And it's a lot more work than one would expect — Jamie tells us that joss sticks alone have over a thousand variations.

"They can be long or short, and have different smells like sandalwood, cedarwood, jasmine and lavender," she explains.

The store even sells paper offerings that are shaped like houses and cars, which customers typically purchase for close relatives and their ancestors.

While some customers are pleasantly surprised to know how young Jamie is, she admits that she actually gets quite a few remarks about her wasting her youth away on a sunset trade.

Some even go to the extent of saying that "there is no future for [her]".

"It's a bit upsetting because it is a family business and I want to carry it on," she expresses with a tinge of sadness in her voice. 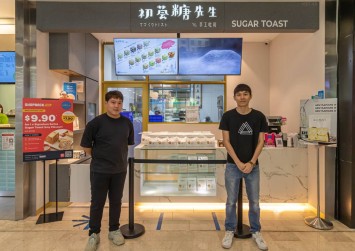 But it isn't just about continuing the family tradition. Jamie confesses that watching her ageing parents doing such intensive physical labour pains her and she wants to help them out as much as possible despite her father's protests.

In hopes of discouraging his daughter, he's told her that people her age don't usually come to wet markets and apart from that, she won't be able to wear nice clothes or shoes while working in the sweltering heat.

"It's more like commitment and responsibility. I just really want to help my dad with this," she tells us resolutely.

And it isn't just for the short-term either — Jamie says that she's in it for the long run unless her father decides to permanently shutter the shop. But till then, she hopes to be able to "prolong the business" as much as she can.

"I want to keep this tradition going for as long as possible because it's in our roots," Jamie adds earnestly.

While the transition for Jamie hasn't been easy, her job switch been a boon to the family business.

Thanks to her prior experience in the media industry, Jamie has managed to help the business go digital by setting up a business account on Facebook, Instagram and WhatsApp.

On top of that, in time to come, Jamie hopes the business will eventually be able to enter the e-commerce scene and sell their products on platforms like Lazada and Shopee. But she says that's all still in the pipeline because her current work schedule is already so packed.

"I totally don't even have time to look at my phone so it's a bit difficult for me to try to figure out how to set all this up," she says with a tired laugh.

"I hope that with these pages, I can try to educate the younger generations on what kim zua is and what all these festivals are."