The flat selection process can be nerve-wrecking. To help make your decision easier, we show you some of the better units to pick at Tampines GreenSpring, which was launched in the Nov 2019 BTO sales exercise.

Don't want to live in the East? Read our analyses for the Tengah BTOs or Yio Chu Kang Beacon instead, which were also launched in November 2019.

A BRIEF WORD ABOUT THE SITE

Two words: Fabulous location. Unlike most BTOs with crappy localities, Tampines GreenSpring is already surrounded by amenities aplenty. Situated along Tampines Ave 5 and sandwiching the Masjid Darul Ghufran mosque, it's less than a 10-min walk to Tampines MRT (which is an interchange for both the East-West and Downtown MRT lines) and its nearby shopping centres.

It is also located just behind the site of Our Tampines Hub, which comprises a library, hawker centre, an array of retail and food outlets, as well as a sports complex.

Tampines GreenSpring is one of the better BTOs launched this time, so competition will definitely be stiff.

UNIT ANALYSIS: WHAT TO LOOK OUT FOR, WHAT TO AVOID?

If you take a look at the site, some of the stacks are facing Tampines Ave 5, which is a considerably busy road with lots of buses passing through, thanks to the bus stop located right outside Tampines GreenSpring.

Stacks facing Tampines Walk can also be an issue, since it leads into the drop-off point for Our Tampines Hub, which can get quite busy.

Avoid stacks facing the roads for some peace and quiet.

2. I WANT TO BE LOCATED NEAR THE AMENITIES

So anywhere on the site will get you to the nearby amenities (malls, MRT, the hustle and bustle) without taking too much time, but if you really want the surrounding amenities to be literally at your doorstep, stacks at these blocks will ensure minimal walking.

Tough luck. You won't get a unit that is completely unblocked as the entire site is surrounded by structures and other buildings.

But there are some stacks that are located some distance away from the next tall piece of concrete, so you might get relatively decent views.

*These stacks are facing the carpark, which isn't a very tall structure at five storeys high. Pick a unit on the higher floors for relatively unblocked views.

4. I WANT A HOME THAT FEELS COOL 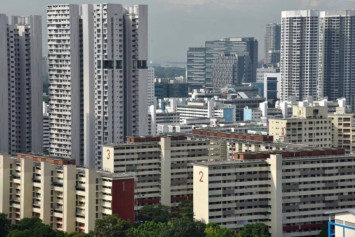 For a home that feels cooler, avoid stacks that face the hot afternoon sun, which in Singapore, comes from the northwest or southwest directions, depending on the time of the year, during the late afternoon.

The heat from the sun often gets trapped, leaving your home feeling like a baked oven when you return home in the evening.

You will want pick a flat that does not have the living room and bedrooms exposed to the western sun, which are areas where you will hang out most often.

To be extra sure which flats will be facing the afternoon sun, check out the BTO model at HBD hub when you head down to choose your flat.

If you value your privacy or just not that sociable a person, you might want to select a flat that won't have nosy neighbours poking their heads in while walking through the HDB corridors.

Pick corner units and ensure they are far away from the lifts and rubbish chutes.

Extra note to take note: Stacks in close proximity to areas within the site that see more human activity e.g. mosque, pavilion, carpark, playground and fitness stations might feel less private and can be noisy.