Once a defunct terminal, the revamped TWA Hotel is now a must-stay

It opened to critical acclaim in 1962. Designed by Finnish-American architect Eero Saarinen for Trans World Airlines (which operated from 1930 to 2001), the mid-century style terminal with its 94m wing-shaped roof was the Futurist embodiment of the jet age.

As modern aviation advanced, the TWA Flight Center became a relic, and closed in 2001. Used in the filming of Ocean's 8, it seemed handier as a movie set than an airport terminal.

The rehabilitation, which began in 2016 and ended late last year, cost about US$265 million (S$344 million) and transformed the flight centre into a world-class 512-room hotel.

The rooms are housed in two new six-storey buildings on either side of Saarinen's landmark building, while the crescent-shaped structure between the former TWA Flight Center and Jetblue's Terminal 5 holds a sunken lounge bar, a rooftop pool, a grand ballroom, and a 929 sq m observation deck for guests to watch planes take off and land. 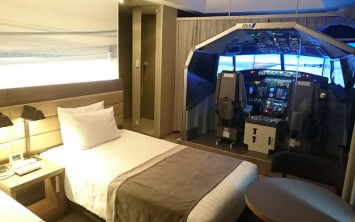 As a tribute to its '60s history, its interior decor includes Knoll furniture and a rotary phone in every room.

Although TWA Hotel caters mostly to stopover passengers, it already has a fashion fan: Louis Vuitton showed its Cruise 2020 collection there in May 2019, and probably won't be the last fashion brand to regard it as a destination hotel.

This article was first published in Her World.