But you might be even more impressed to find out that she started out without formal culinary training.

"I was always interested in baking and often joined my mum in the kitchen. However, I never took it seriously until I went to study for a degree in commerce in Australia, where I was introduced to a variety of quality ingredients," says the 28-year-old.

"I started to purchase cookbooks and look for recipes. And by the time I graduated, I was convinced baking is where my passion lies and was very keen to get into the industry."

Given her lack of formal experience, however, breaking into it was no walk in the park. Many doors were slammed in her face before she was presented with an opportunity.

SHE STRUGGLED A LOT IN THE CUT-THROAT CULINARY INDUSTRY

Undeterred by her disadvantage, Maxine put herself out there by creating an online portfolio and sending her resume to various bakeries. After facing "numerous rejections", she was offered a two-week trial placement at Les Amis by Cheryl Koh.

When the trial ended, she was offered a full-time position. But just because she finally earned a spot in a restaurant didn't mean that there were fewer challenges in her way.

"Aside from teaching you how to make pastries, a school also teaches you how to work in a clean and efficient manner. Because I had no formal culinary education, I wasn't adept at work-space and schedule organisation at the start," she shares. 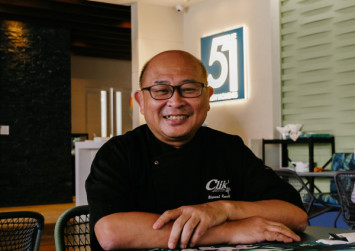 Then there were also physical challenges.

"Being a chef is a very physically demanding job-we have to stand for long hours and handle heavy equipment. When I first started out, I would work out even after a long day at work to build on my physical strength so that I'd be less dependent on others in the kitchen."

But her determination carried her through and she worked her way up the ranks from Pastry Commis (one of the most junior roles in the kitchen) at Les Amis to Pastry Junior Sous Chef in Joël Robuchon Restaurant. It was at the latter that she met chef Vianney Massot, who at that time was heading L'atelier de Joël Robuchon.

Maxine has been in the industry for five years now but she doesn't think that she faces fewer struggles at work. Rather, her current set of struggles are different.

"The struggles I face have definitely evolved. My current challenge is to constantly create and innovate. I have to not be afraid to try out new and interesting ideas. Some ideas do not translate well into reality, and it is important to know when to keep working at it, and when to let the idea go."

She adds that because Singaporeans are becoming more health-conscious, she also has to constantly look for ways to make her desserts lighter on the palate and less sweet-a stark contrast against the rich and sugared traditional French pastries she's been trained to make.

BUT THE FRUITS OF HER LABOUR HAVE BEEN SWEET 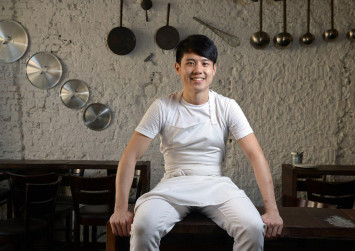 Just what does Maxine love about baking that she's been willing to keep going even when the going got tough?

"Pastry-making is very much a science. It's a play on temperatures and timing and one must know their ingredients and compositions well," she explains.

"Testing out new ideas and recipes involves multiple trials and errors but I find that the process brings me a great sense of achievement after."

It helps that her passion and diligence have paid off - the Vianney Massot Restaurant was awarded its first Michelin Star within a few months of its establishment.

"Though I worked in the three Michelin-starred Joël Robuchon Restaurant, this was the first time that I truly felt like I played a significant role in earning us our star. It gave the team validation of our hard work."

Maxine chose to dive into an industry though the odds were stacked against her, so her advice to aspiring female chefs probably stems from her hard climb up the culinary ladder: "Keep persevering! It's very easy to get lost in the daily grind and become deluded, but always remember why you joined the industry and why you enjoy what you do. Always keep your goals and dreams in mind."

"Surround yourself with like-minded people who share the same passion and let the camaraderie encourage you to pursue your dreams."

It probably is of little surprise that she hopes to own her own pastry store or dessert bar one day. And she already knows how the menu will be-it will not only change frequently, but also feature an assortment of "wacky and adventurous flavour pairings".