Recruit! Read this: Fall in! The unofficial guide to surviving BMT

Don't you just hate it when you've psyched yourself up for a big event only to be told that it has to be postponed - like a job interview, a bungee jump or a first date.

One can only imagine what it's like for the recruits (around 6,250 of them) enlisting during the extended CB period, and being told that the SAF has likewise extended its suspension of BMT to 1 Jun 2020.

Read Also
Coronavirus: Basic military training to be suspended for a month; recruits to stay home 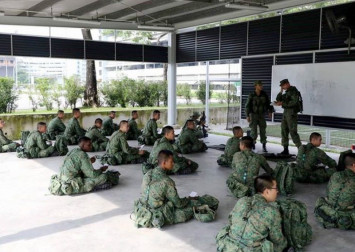 This month, starting from Friday (8 May), 2,480 pre-enlistees will be administratively enlisted on their scheduled enlistment dates.

Means what? Means no need to physically report for BMT. Just stay home until the BMT suspension is lifted, and wait for updates on new reporting dates.

And that also means once the Covid-19 outbreak has subsided... BMT. Will. Happen.

So, if you're affected or you know someone who is and you just need an outlet to release some pent up, unresolved nervous energy, it's probably a good time to check out (and maybe even memorise) Fall In! The Unofficial Guide to Surviving Basic Military Training, a book (a bible, more like!) written by Matthew Chew and Nicholas U Jin, and published by Epigram Books.

Inside, you'll find useful and important why-no-one-told-me-before type of material including "Before BMT: What You Need To Know", "The Essentials: Things To Take" and "From Ah Boys To MC King: Whom You'll Meet".

We speak to the 22-year-old authors and friends who first met in JC in 2014. Matthew is studying medicine at the National University of Singapore, while Nicholas is pursuing a law degree at the University of Oxford (though he returned to Singapore in March 2020 because of the Covid-19 outbreak).

What prompted you to come up with this book?

Nicholas (N): In late 2015, we had both finished our final exams, and we realised we had to face the looming spectre of enlistment. We both realised that we didn’t know anything about national service - anything we knew were from bits and pieces strung together from online forums or old stories from seniors.

We felt like we wanted to get this information out, not in an overly formal or restrictive way but from the perspective of someone who had gone through it. In our book you’ll find a balance of information - from FAQs like “How long is national service?” to tips (based on our personal strategies) to get through BMT.

Who prepared you for BMT?

N: Naturally, we spoke to our fathers, who gave us personal anecdotes from an army that's long been replaced by the newer, technology-oriented national service we have today.

Like many, we tried doing a simple google search to hear from any who may have had a more recent encounter with the army, but a vast majority of the information basically boiled down to “it depends”.

What do you wish you had known about BMT before you enlisted?

Matthew (M): What to take to BMT. There is a shortlist of things that the enlistment letter mandates you bring, such as some money for your first haircut (or vending machine snacks) and swimming goggles.

BMT will ensure that you have been adequately supplied to survive for BMT, as everything from your clothing to a small razor will be provided, but there are things which could be taken to make life easier.

I enlisted just a few days before Nicholas as we were in separate companies, and I recall him asking me for advice on what was important to bring. It was no surprise that months later, when we eventually sat down and typed out our first manuscript for Fall In!, one of the first segments we wrote was "what to take to BMT".

N: The importance of organisation. As many friends and family members can attest, organisation and neatness are not my strong suits. On the other hand, the military operates as an instrument of precision. Miss the deadline by 1 second, and that could be a precious weekend with your family (or girlfriend) gone.

This was a painful lesson that I had to learn, as my cluttered belongings and subsequent late showing for a “force prep” (you’ll find it in our book) predictably led to a weekend stay in the "Tekong Hotel".

On that note, for all you potential recruits: always know where your things are at any given time, and where you’re supposed to be so that you don’t fall afoul of the rules.

M: I definitely had an incredibly interesting journey throughout NS. As a PES C enlistee with a previous injury, I had the chance to become a wheeled vehicle technician. I'll never forget the strong friendships I forged throughout NS.

The most challenging aspect of NS was the very beginning of BMT. It really was a world of difference stepping onto Tekong for the first time, forsaking many of the comforts of home which I had long grown accustomed to. It was difficult to suddenly transition to a daily routine which started at 5.30 in the morning after a 2-month break after exams.

N: The best part of BMT: the ayam penyet on the first day as a recruit, when parents visit!

On a serious note, BMT was quite a transformative experience: the transformation from boy to man. It was definitely challenging to adapt to such a structured and hierarchical lifestyle, not to say it wasn’t fun!

The best times were really those intermittent moments during a period of struggle, or during our rest periods - when we would just look back at a long day and share about our lives with one another. Being exposed to and learning to appreciate and understand people of all backgrounds was something truly valuable to me.

After BMT, my proudest moment undoubtedly was Family Day in Officer Cadet School, when I showed my family the beautiful premises of SAFTI MI.

It was a proud moment for my parents to look at their son and know that he would one day become a commissioned officer of the Singapore Armed Forces; especially significant as my parents were born in Malaysia, and I was the first in the family to be doing national service.

Unfortunately, my hopes were dashed when the medical officer discovered that I had sustained an acromioclavicular (shoulder) injury that made me unfit for active military service. This was not more than a month before I would have commissioned: the final stretch.

The next few months adapting to life as a clerk within the same camp, as the rest of my friends went on to complete the Officer Cadet Course, were surely difficult.

However, I found other ways to contribute to the service despite my injury: Firstly through Fall In!, as I reached out to Matthew to begin the project, and, secondly, through a host of initiatives I began in my camp: “SI Cares”, an inaugural newsletter to update everyone in the Signal Institute about the many developments happening around camp.

By the end of my service, I was convinced that anyone at any level in the military is capable of doing something positive to help the collective efforts of the nation.

What are the most valuable lessons you learnt from BMT?

N: I remember the first time I booked out of BMT, I had a new-found appreciation of everything around me. I recall that weekend I tried to spend as much time with my family as possible, I recall enjoying simple things I had taken for granted - from home cooked food to air-conditioned spaces.

Even now, if I were to face a difficult challenge in my life, I often think back to BMT and realise that I take for granted the comforts of home. And all of a sudden, the challenge does not seem so much of a burden after all.

You better wake up your idea and get your copy of Fall In! The Unofficial Guide to Surviving Basic Military Training here.