Long before Cicheti rose to gastronomic fame in Singapore, The Cicheti Group’s co-founders had a dream. Chef Lim Yew Aun had his heart set on a Neapolitan-style pizzeria as their first concept, but the risk of specializing so narrowly was great.

Instead, he and his cousin Liling Ong vowed to keep that dream burning, even as they went on to found now-renowned trattoria Cicheti and pasta-and-wine haven Bar Cicheti . Eight years on, the pair are finally ready to bring their pizza-centred concept into the world, in the form of Wild Child Pizzette.

A pizzette is as cutesy as it sounds – a petite-sized pizza that, in Wild Child’s case, spans a comfortable ten inches. Small enough to polish off by yourself, but pretty big on flavour, thanks to a Neapolitan-style dough that undergoes sixty hours of slow fermentation.

Each round of dough then spends a hot minute in their wood-fired oven – a massive beast from Naples that takes pride of place in their Circular Road shophouse – and emerges like a fluffy, chewy dream.

At seven options strong, the pizzette menu is short but satisfying, especially when paired with an eclectic drinks lineup (more on that later). Whereas the pizzas dished up at Cicheti cleave to the classics, Wild Child Pizzette gets a little more daring with its dough.

Or the Spianata Calabrese ($19), which sees crispy salami and lashings of Sichuan chili honey on a blanket of tomato sauce and fior di latte. Don’t let the ‘Sichuan’ scare you, though – it’s far less fiery than it sounds, leaving more of a slow, sweet heat.

The surprise hit of the menu is none other than kale pizza, and we’re saying this as habitual kale avoiders. The Cavolo Nero ($18.50) is named for black kale, the Italian cousin of curly kale with dark good looks and a tangier, less bitter taste.

Tender leaves of this kale find their way onto a gooey bed of fior di latte, alongside sweet garlic confit and dabs of bagna cauda. Meanwhile, the Trio Formaggio ($19) is a fairly humdrum take on the classic four-cheese pizza minus the gorgonzola. We find ourselves missing the sharpness of blue cheese to cut through all that richness, though the addition of caramelized onions is a nice touch.

There’s also an eclectic array of antipasti – or, as they dub it, antipizzette – to flesh out your meal. If there’s no such thing as too much dough for you, opt for the Bikini ($18.50) – a slim sandwich of pizza dough bread oozing with melt-in-the-mouth beef cheek marmalade, taleggio, and provolone.

Or go for a refreshing crunch with the Cauliflower ($14.50), a Middle Eastern toss-up of roasted cauliflower florets, pistachios, mint, and coriander. Held together with creamy labneh, it’s savoury yet sour, deeply smoky, and minty all at once.

It’s worth pigging out on the Kurobuta (from $17), a dish of roast pork belly with luscious fat hidden by a fabulous crackling skin. Be sure to dunk it into some Crack Oil, Chef Aun’s addictive housemade chili oil – it’s listed as ‘secret price’ on the menu, but the real secret is that it’s free.

The Cicheti Group’s sommelier Ronald Kamiyama is helming the tipple program, and he’s curated some seriously funky bottles to pair – think natural wines, craft beers, and sakes that hark back to ancient techniques with indigenous rice strains and native yeasts.

To order your vino by the glass (from $17), all you need to do is pick your category – bubbly, macerated, white, or red – and leave yourself in Kamiyama’s capable hands. 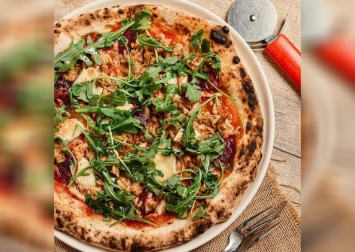 Silky with rockmelon sweetness, it brings out the chili honey of the Spianata Calabrese beautifully. Then there’s Akishika Shuzo’s Motoshibori ($16/glass), brewed using the traditional Yamahai method. Lactic acid bacteria in the air is allowed to naturally enter the fermentation starter, resulting in a surprising, textured brew with a subtle umami finish.