Satay and caviar: A taste of SIA's $288 and $488 airplane meals you can deliver home

SINGAPORE - The orders started rolling in just after midnight, when SIA @ Home went live. And 12 hours later, at 2pm on Monday (Oct 5), Singapore Airlines had received 57 orders for its first and business class meals, to be delivered to homes here.

More than half - 56 per cent to be precise - of the orders were for the first class meals, and of all the orders, 72 per cent were for more than just the food. These customers also opted for extras such as china and glasses.

Within 30 minutes of the service going live at midnight on Oct 5, the airline had received 10 orders, said Ms Betty Wong, the airline's divisional vice president for inflight services and design.

Those who want to order the meals can click here.

SIA @ Home is one of three initiatives the national carrier has come up with to engage customers during the Covid-19 pandemic, which has devastated the travel industry, with passengers and planes grounded and the number of flights plunging.

SIA @ Home aims to bring the first and business class experience into homes.

The kits from British perfume house Penhaligon's have not been launched on flights, so customers who order the business class meals will be the first to get them, says Ms Wong.

Customers can opt to add champagne and other extras to their menus, and prices top out at $388 for the top business class package, which includes a 14-piece set of tableware by Narumi, glasses, amenity kits, slippers, socks and eyeshades.

The first class all-inclusive package is priced at $888 and includes a bottle of champagne, a bottle of red or white burgundy wine, a 12-piece set of Wedgwood bone china tableware, a six-piece set of Lalique crystal glasses, three amenity kits, Lalique sleep suits, and slippers, socks and eyeshades.

"This is not a home delivery service," says Ms Wong, at a preview for the media on Monday (Oct 5). "This is about an experience at home, with the wines, satay and garlic bread that people miss."

To that end, the airline is trying to make the ordering and receiving experience as seamless as possible.

A team of cabin crew concierges guide customers through their choices. Once the order is confirmed, customers are sent an e-mail containing a welcome message, a video from the chef whose meal they have chosen, a video from the sommelier who had picked the wines and reheating and plating instructions, among other things.

The airline has also curated four different playlists which customers can listen to while they have their meals.

Incidentally, the food is delivered the way they would be on planes, on foil trays, says Mr Antony McNeil, the airline's food and beverage director.

Airlines sometimes season their food more strongly to compensate for how the pressurised cabins and high altitude blunt people's senses of taste and smell, but he says that new aircraft have more moisture in the air - 16 to 18 per cent humidity, compared to 12 per cent for older aircraft - so there was no need to adjust the seasoning for the food to be consumed on terra firma.

"The moisture content in the cabins is higher and sinuses don't dry up as much," he says.

Why would anybody pay hundreds of dollars to eat airplane food? I thought hard about this when I accepted the invitation to taste Singapore Airlines' first and business class food, which people can now order.

It turns out that economy class travellers like me have been missing out big time. Would I pay $288 and $448 for this food? I can think of many things to do with that money and none of those things involve airplane food.

Still, if you want a taste of the luxe life, here's what I thought.

The three sticks of chicken satay served in first and business class is delicious, to be sure, but what's even better is the vegetarian option, which customers who order Sanjeev Kapoor's vegetarian meals will get.

SIA uses Impossible, an American meat substitute, for the vegetarian satay, and customers get six sticks of it. The spicing is spot on and vibrant and, frankly, it tastes better than the chicken.

This is served in first class and each passenger or customer gets a 30g jar of Oscietra caviar from Italy with blinis, creme fraiche, chives, chopped egg yolks and egg white. The blinis are tender, not rubbery as you might expect and perfect landing pads for the briny caviar.

It is said that passengers wake up when the scent of garlic bread wafts through the cabin. I have seen the bread before toasting and it is loaded with butter, garlic and chopped parsley.

The slices reheat perfectly too. The other bread I enjoy is the rosemary-flecked lavash that is part of the bread basket. That won't give you dragon breath. 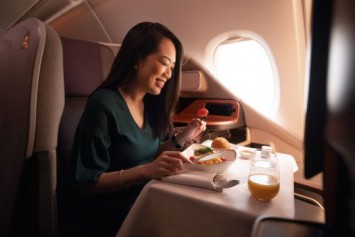 The navarin of beef short rib that we taste cannot be faulted and the meat is tender and juicy. But I would have liked to have tried the roasted free-range chicken breast, since that is the chef's signature dish. Still, the stew of olives and bell peppers that come with the beef is bright and appetising.

I would pick the chestnut veloute over the poached lobster for the appetiser simply because the silky soup, with a hint of sweet from the chestnuts, reminds me that autumn is coming.

The mango lime mint cheesecake is not too rich, but the mango - I eat all the perfect cubes sitting atop the cake - is strangely devoid of sweetness or tartness. I do not detect lime or mint either.

The Australian chef's menu looks the most interesting to me, and I would have liked to have tried the crisp-looking pork belly. Still, the duck confit is right for the season, not that there are seasons in Singapore. The duck sports a panko coating, which gives a good crunch without having to pan-fry the duck. The chef's beef consomme has great depth of flavour too.

His dessert, an eclair with chocolate ganache and morello cherry compote, is the best of the three I tried.

So much attention is paid to the seasons in Japanese food, even for the trays served on planes. There are chrysanthemum leaves, which evoke autumn, and the slices of carrot are shaped like maple leaves, appropriate for the season.

The baked prawn topped with sea urchin sounds luxe but does not wow, alas. Much better is the chicken thigh with a spring onion and ginger crust.

The Impossible satay served with this chef's vegetarian meal is stellar and I would order just the satay if I could.

That said, his coconut ginger pancake with prawn is excellent, tender and brightly spiced. The main course of paneer tulsi malai, served with a raft of condiments, is an adventure for the taste buds.

The white pumpkin rice pudding with stewed pears is creamy, dreamy goodness, but I would have liked to try his gulab jamun cheesecake.

Those who want to order SIA's meals for delivery can click here.

Bookings for the pop-up restaurant start on Oct 12 and bookings for tours of the training facility start on Nov 1.