Savoury gins in cocktails is a trend that's here to stay

Gin is known not only for its juniper flavour, but also for its citrus and herbaceous flavours, its florals and spice. Why not a gin made with olive oil, seaweed, or parmesan cheese aged for 30 months?

By combining umami and saline flavours into gins, maverick distilleries around the world are pushing the boundaries of what a gin can be.

In recent years, flavoured and pink gins have been popular, but a new variety offers alternatives. Examples include Spain's Gin Mare made with arbequina olives, basil, rosemary and thyme, The Netherlands' Rutte Celery Gin, Japan's Sakurao made from Hiroshima oyster shells, and California's Gray Whale Gin with sea kelp, almonds and fir needles.

Gin, in all its styles, is booming. Statista estimates the global gin market is now worth US$13 billion (S$17.8 billion), and will grow by 10 per cent annually.

The UK generates the most revenue (US$3.2 billion). The number of distilleries in England has almost tripled since 2016. There are now more than 550 gin distilleries across Britain. Singapore also has its craft distilleries such as Compendium, Tanglin Gin, Brass Lion Distillery, and SoulSister Spirits.

Jesse Vida, head bartender at Atlas, says the trend of savoury gins is growing. "Modern gins have been expanding non-stop over the last six years, with every style growing in options," says Vida. "Some brands are taking a more unique approach by focusing on savoury flavours. Additionally, gin drinkers today are becoming increasingly adventurous due to exposure to more varieties of the liquor." 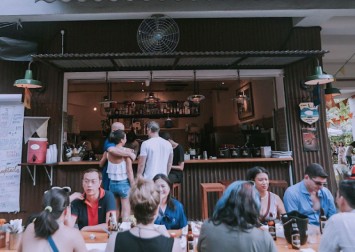 At Atlas, number 16 in the World's 50 Best Bars award winners honoured in London last month, Vida uses Black Tomato Gin from The Netherlands. "Probably the most savoury" Vida has at the bar, it is made from hand-grown Sicilian black tomatoes and drops of seawater from the Oosterschelde, the largest and wettest national park, in The Netherlands.

Vida says that the bar also offers olive gins, celery gins, and gins made with oyster shells and seaweed. "Traditionally savoury gin cocktails, such as a Red Snapper (a Bloody Mary with gin), a Gibson or a dirty martini, are a natural match for savoury gins," he says. "Outside of that, get creative and play with the flavours."

Cam Mackenzie, distiller and co-founder of Four Pillars in Healesville, Australia, spent five years experimenting with flavours before he "had the guts to release" his Olive Leaf Gin in 2020.

Later, he visited a friend at olive oil producer Cobram Estate during harvest time in his own state of Victoria. "The aromatics around the grove were insane. Everyone just wanted a martini," says Mackenzie.

He realised that olive oil, along with olive leaf, could enhance the flavour of a gin and make it more rounded and full-bodied.

Olive Leaf Gin uses Cobram olive oil and dried leaves, as well as fresh rosemary and bay leaf grown locally in Healesville. "Never ask the locals for rosemary and bay and say that you'll pay in gin," he says. "Let's just say we had an overwhelming response — I don't think there's a viable rosemary bush left in Healesville!"

He also adds macadamia nut, lemon myrtle, lemon and grapefruit, which freshen the palate and prevent it from being greasy. "I think it makes a beautiful martini, but I also wouldn't shy away from a refreshing G and T. Just change up the garnish and add some lemon and rosemary."

Read Also
Here's what you get when a pastry chef, a chef owner and an award-winning mixologist walk into a bar 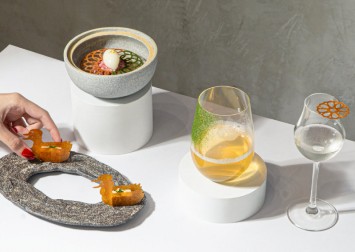 Umami Gin contains South Italian capers imported directly from a cooperative and distilled at 45 degrees to maintain the fresh iodic aroma. He then combines this distillate with parmigiano reggiano.

"We grate delicious 30-month-old parmesan into 45 per cent alcohol and then let it rest for a week, allowing the glutamates and salts to dissolve. Then we filter the liquid several times, ending up with a very umami-rich extract."

Abouaf adds juniper, bergamot, and a base of neutral grain spirit, and leaves the blend to rest in old oak Cognac barrels for several months before bottling it.

A former Cognac distiller, he launched Umami in 2014, but it wasn't originally a gin. Instead, it was a "freestyle, uncategorised spirit" that attracted a little cult following here in France as it was quite an atypical, unique spirit. In 2020, he relaunched it as a gin by adding juniper to the mix.

"It entered the consumer's imagination more easily as a gin rather than an unusual spirit, and it enabled us to enter the market with a more interesting offer," he says. "Also, the addition of juniper added a beautiful brightness that balanced out the somewhat vegetable notes of the capers. That made it a better spirit."

Abouaf says it is still a niche product, but it has found its way onto menus in France, the UK, Australia and Switzerland.

"It's not beginners who are going for it, but seasoned enthusiasts looking for something new and fresh," he says. "Also, it's a bartender's spirit — it's born from experimentation, and shines when worked into cocktails by the crafty hands of someone who likes to experiment."

He adds, "As gin distillers, we're given enormous freedom to play, and we take advantage of this to create unique delights."

Black Tomato Gin is a complex and robust spirit, with rich dark fruits balanced by the tang of the tomato, spice, and a peppery kick of juniper. Atlas head bartender Jesse Vida recommends it in a Red Snapper.