Little Aiden was just 7 months old when he came down with fever.

"His fever was persistent and his mood was erratic. The initial symptoms were rash, and swollen lymph nodes", recalls his father, Jeremy Chew.

"He was given fever medicine and it was treated as a normal fever by his paediatrician in Mount Alvernia Hospital."

It was May 2015, and nobody suspected the baby of having Kawasaki disease.

"If only Aiden was treated earlier and given the right treatment...", says Jeremy wistfully.

A HEARTBREAKING STORY OF KAWASAKI DISEASE IN BABIES

Aiden's condition soon deteriorated and he had to get admitted to the hospital.

"The A&E doctor from Mt Alvernia then suggested that Aiden might be suffering from Kawasaki Disease (KD). We had no idea about the illness."

"His paediatrician tried to treat it, but the standard IVIG treatment was unable to bring down Aiden's fever. The irresponsible doctor then told us that he was not capable of treating Aiden anymore as his speciality was actually something else." 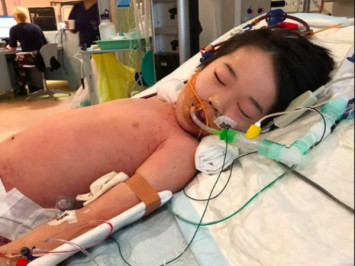 "So he requested us to send Aiden to KK Hospital for further treatment."

"In KKH, Aiden was treated with immediate care as the Doctors there know about KD and the importance of early treatment."

However, the delay in getting the right treatment proved costly.

"Aiden was found to have massive heart aneurysms and was required to have injections daily to prevent the clotting of blood in the aneurysms, that would trigger a heart attack."

FOUGHT TILL HIS LAST BREATH

"Aiden was placed under a heart support machine called Centrimag which was the first for a baby in Singapore", reveals Jeremy.

"We were totally devastated by this outcome as we knew it was hard for us to have heart replacement as in Singapore, organ transplant is only compulsory for adults and not for children."

"An organ transplant would have helped but we knew it was very rare plus it was not practised in Singapore."

Aiden passed away in November 2015, after 6 months of battling the illness.

"Aiden passed away on Nov 25, though we had already got the Ministry's approval for another heart support machine, called the Berlin Heart. But due to infections and complications in one of the small surgeries, he couldn't survive."

"Aiden fought till his last breath, but left us."

Today, daddy Jeremy devotes his time and energy to creating awareness for Kawasaki disease and organ transplant in Singapore. Mummy Marie works as an HR recruiter. They have 2 other kids, Adele, 3, and 1.5 year old Alden.

"The key reason why we are promoting Kawasaki disease (KD) and organ transplant awareness is due to the fact that the faster KD is identified and treated, the better the outcome will be", Jeremy tells us.

"In the KD Community that a group of mothers has created, they want to promote KD awareness as some of their children also suffered due to inexperience or late diagnosis of this illness."

"As for Organ Transplant, it is my personal view that as Singapore is very small, there is no organ transplant policy for children and if you are willing to donate your kids organs, it is also a very tough path to go."

"In Aiden's case we actually requested the Organ Transplant team to request to donate Aiden's organs such as the corneas or other parts of the body that are not affected by the heart attack or KD. However, in the end. the team told us that it was impossible to donate due to the fact that Aiden was not brain dead."

ADVICE FOR OTHER PARENTS

Looking back, are there any regrets? If you could, would you have changed anything?

"There are many ifs and definitely many regrets...", says Jeremy.

"We were first-time parents at that time, and assumed that all paediatricians would be equally competent. If we could change anything, we would have appointed our current PD who we researched about carefully and was recommended by many friends."

"The difference lies in the devotion and care of the doctor."

'If Aiden was treated earlier and given the right treatment, his heart might not have been impacted that much. Lastly parents' gut feeling is always important, and if you don't feel comfortable, you should always seek more advice from the doctor. "

What advice would you give other parents in Singapore whose children are going through a medical crisis?

"In Aiden's case, we had communicated to many parties including the Ministry and the PM, as well as many medical professionals."

"I would say that help is always available, so do not feel desperate. You can always seek help from the hospital or the government as long your request is valid. Always seek second opinion if you are uncomfortable. Trust your parental instinct in terms of seeking treatment."

"Stay strong as you will require the strength to support your kid's journey."

Thank you, Jeremy, for sharing your story with us. It is really admirable how this dad drew strength from his grief to create more awareness about this illness, and help many others.

Parents, do note that, the symptoms of Kawasaki disease include:

According to the Kawasaki Disease (KD) Support Group Singapore, there are over 200 cases of KD in Singapore every year. Treatment of Kawasaki disease should begin within 10 days after a fever starts, to avoid cardiovascular complications.

If parents or medical professionals recognise the symptoms early, children with Kawasaki disease can fully recover within a few days.