Enter the Perez home and the first thing you will notice are its walls, almost all of which are covered with children's drawings.

The floor-to-ceiling homemade collage might be nothing more than just a bunch of kiddy doodles to most people.

But for Christian Perez - or Chris as she is known to family and friends - they are a precious reminder of her 12-year-old daughter Amor's developmental progress over the last few years.

Amor suffers from multiple developmental delays, which have affected her coordination and motor skills. Chris, 42, recalls how at the age of seven, her daughter's drawings of happy smiling people had straight lips because she couldn't draw curves.

"But she kept drawing and eventually had a breakthrough. It was my husband's idea to paste the drawings on the walls to motivate her," the stay-at-home mum says.

It took Chris a while to get used to the idea. "I always thought a home should be covered by nice canvas paintings, not children's drawings. But we will do anything the kids want to do - even if it means covering our walls with their drawings - because we believe it gives them the motivation to keep trying," she says.

The Perezes (pictured) believe this positive and encouraging method of parenting has helped their daughter Amor and her twin brother, Nathan, trudge on amid their numerous developmental challenges.

A MULTITUDE OF HEALTH ISSUES

Born premature at 32 weeks following a complicated pregnancy that left Chris on bedrest for two months, the twins suffered multiple medical and developmental issues at birth.

Before conceiving the twins, Chris had three heartbreaking miscarriages.

At birth, Nathan was born blue and had a "hole" in the brain, causing cerebral palsy that affected control of his lower limbs.

"The doctor told us he may never walk," shares Chris, recounting the terrible diagnosis that left her shattered.  She has a younger son who is nine year old.

At the age of four, Nathan was diagnosed with severe autism. He was unable to respond to his name, speak, interact socially or maintain any eye contact.

Amor, on the other hand, had appeared healthy at birth, but her problems showed up over time. 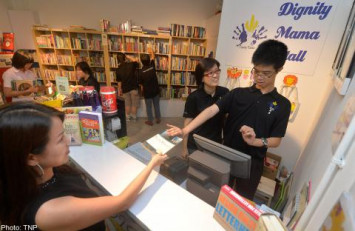 At five months old, she was found to have spastic muscles and was later diagnosed with global developmental delay (GDD) when doctors saw delays in her physical, speech and social developmental milestones.

GDD is a term used to describe significant delays in two or more areas of development - including motor skills, communication, cognition and social skills - in children under five.

Amor also suffered frequent seizures from the age of four to seven, as well as touch and hearing sensory issues that affected the way she processed touch and sounds.

"Since Amor could not hear properly, she could not sing properly. At three, she sounded like she was reciting Harry Potter spells when she sang.

But of course, we never told her (how out of tune she was). It was enough for us that she had the interest to sing," Chris says.

While their developmental issues are likely due to their prematurity, Chris sometimes wonder if they are linked to the medications she was prescribed during her pregnancy or the medications the twins took after birth.

"But I guess we'll never know for sure. I don't want to keep thinking about what went wrong but focus on helping them," she says.

Recalling the twins' early years, Chris shares how bad news was thrown at them at every doctor's check-up despite their efforts of early intervention therapies.

"Every year, we kept hearing the same thing at their check-ups. It was especially bad for Nathan," she says.

Although conventional therapy methods worked relatively well for Amor, Nathan's progress was dismal. For instance, after going through a year of intensive therapy, Nathan was assessed to have progressed only two months in his development.

"At four years old, his cognitive development was that of a one-year-old. At five, it was one year and two months. I remember asking myself, is this how it is going to be like for him for the rest of his life?" Chris says.

Reality hit her hard when the kids started attending preschool. Chris had pinned high hopes on Amor as she did not seem to have problems taking instruction, unlike her brother, who was in his own world.

She thought Amor would "somehow catch up" with her peers over time. Looking back, Chris now realises it was denial.

"Compared to her twin brother, who needed a lot more help, I had high expectations for Amor. But when she started mainstream preschool, and you see the rest of the kids in school doing what four-and-a-half-year-olds do, the realisation that she needed so much more help with her developmental issues hit me hard," Chris shares.

The Perezes eventually stopped taking the twins for their developmental assessment follow-ups after their fifth birthday.

"After five years of therapy, nothing was helping Nathan significantly - it was a doomsday scenario. We stopped going for their follow-ups. At that age, we already knew what they had and what we were dealing with," says Chris.

The Perezes later made a radical switch to the Son-Rise method, a home-based therapy that originated from the United States for children with autism spectrum disorders and other developmental disabilities.

When the twins were not attending lessons at a special needs school or conventional therapy, they underwent the home therapy sessions conducted by their parents, who underwent basic training in the United States.

Volunteers, most of whom are family friends, are recruited for the therapy sessions to encourage social skills.

The Perezes says they have seen vast improvement in the twins since embarking on the unconventional route. It was also her own turning point as a stressed mum, Chris shares.

Like many parents with special needs kids, anxiety and stress used to feature in her every day life.

"I used to be very stressed by what the kids could not do. But I've learnt to celebrate all good things and count my blessings. For example, if a child with autism says something weird, you can either go 'oh no' or you can think 'oh good, he's trying his best to speak even if it's in autism-speak'," Chris says. 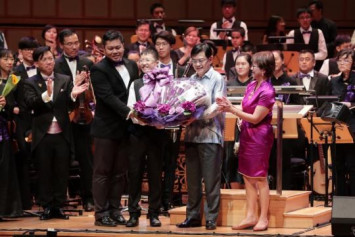 Nathan is now able to walk on his own, although his coordination and balance remain an issue.

While making conversations remains a challenge, his eye contact, speech and ability to socialise have improved over the last few years.

The improvements in Amor are even more pronounced. While she still lags behind her peers cognitively and academically, she has overcome many learning and sensory challenges, learning to write and read fine print recently.

Three years ago, Amor made her debut solo school performance at the Genesis School for Special Education after a teacher uncovered her flair for singing.

She now sings regularly at school events, which is a feat, considering her struggles with sensory issues during her early childhood days.

"When I saw her singing onstage for the first time, I teared. It was a proud mum moment. I never imagined she would be able to capture melodies of songs so beautifully," says Chris, who has engaged a music teacher for Amor to hone her talent.

To motivate her daughter, who is now "concert-ready", Chris held a mini concert titled Let The Rhythm in Me Shine in April 2018, which featured performances by children with special needs and their siblings.

Thirteen children performed at the event, where Amor sang two of her favourite songs - Beautiful by Christina Aguilera and Ten Thousand Reasons by Matt Redman.

The event was organised with support from music and movement provider, Rhythm in Me, and professional entertainers, Star Association.

"I wanted to show that children with special needs can shine despite their dim prognoses," Chris explains.

The mum-of-three says many parents with special needs kids get stressed as they worry that their child's limitations might affect their future. While that is also a concern for her, Chris says she has learnt to relook the idea of "success".

Right now, it is to help her kids find their purpose in life.

"I hope my daughter and son will be able to say at the end of their lives that they've lived a good life, one filled with purpose," she says.

"For Amor, she loves singing now so I want to do all I can to see where this takes us.

"And for Nathan to be able to call me 'Mama' from across the room and communicate his needs now, that's amazing and I will continue to search for his motivations," Chris adds, waving to a grinning Nathan across the room.