Some GE2020 candidates take running for election quite literally

Running for elections is to be taken very seriously. And in certain instances, literally, as shared by some candidates from this year’s election.

The Speaker of Parliament shared a video of himself dashing through corridors, speeding down stairs and travelling from door to door to meet the residents in his constituency. No handshakes of course, but fist bumps aplenty.

He’s also seen keeping it real by wiping off his sweat and taking in breaths of air.

It’s action-packed with quick cuts of him darting from place to place. Interestingly enough, the pace slows down as the video continues, with Tan needing just a second or two more than before to rush down the stairs.

Tan also makes reference of his entrance to politics in his caption: “Running since 2011” and added the hashtags #TCJGE2020NineDayWeightLossProgramBaoJiakOneOrMoneyBack and #JinChuan (out of breath) 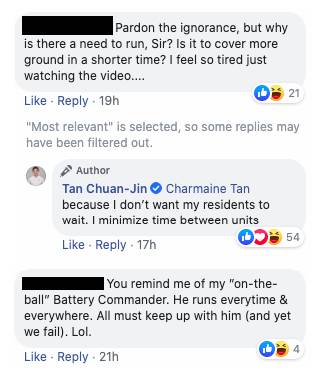 Netizens have applauded his "on-the-ball" attitude, expressing that just by watching the video, they too felt weary.

And if you were wondering if Tan does this only when election season is here, the answer is no. Facebook user Fong Cheng Wah used to follow Tan regularly for house visits and shared that running from house to house was the norm.

Was SGAG-ed yesterday. I shared that I used to tag along for Tan Chuan-Jin's regular house visits, and that running...

"To him it is simple. Running minimises the time residents have to wait for him and it allows him to see more residents," wrote Fong.

I was lucky to be able to catch some residents at home during day-time house visits. A number are still working from...

While Tan’s video was set at night, the People’s Action Party candidate for Tampines GRC’s video featured bright blue skies in the background as it showed him moving quickly down the corridor to meet residents. He certainly had the right type of shoes for running on — black sport shoes with neon orange laces.

He has also promised that he will “continue moving fast” to meet as many residents as he can. 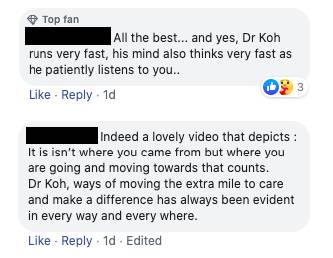 It seems that Dr Koh is well-loved by both his former and potential new constituents. He was previously an Ang Mo Kio GRC MP, but is standing for election in Tampines GRC for GE2020.

The incumbent MP for Mountbatten SMC shared a photo of himself, sprinting from door to door. While we can't tell what pace Lim was going at, suffice to say, it's definitely not a leisurely one, given how his arms were hiked up in a running pose.

While we’re not entirely sure that running is solely to blame for Ong’s soles falling off his sports shoes, the incumbent Sembawang GRC MP must have been on his feet quite a bit for his footwear to fall apart on day three of campaigning.

While netizens applauded his hard work, some asked him to consider a different brand of trainers instead.

While the others were on their feet, the incumbent Tampines GRC MP opted for two wheels to get around instead. And you can’t miss him either with a bunch of white balloons trailing behind him.

Being a Workers' Party candidate is tough. Ask any WP candidates past and present. While some other party's candidates...

He did not post any videos of himself or fellow Workers' Party (WP) members running, but Koh said on Facebook: "While some other party's candidates can run from unit to unit with their army of volunteers already holding the doors open for awaiting residents, we have to trudge along knocking the doors ourselves with one or two, or even no volunteers with us."

He goes on to say: " For those residents whom we do have the privilege to meet, we do our best to spend quality time with each one of them." and ends his post with: "This is what it means to Walk with Singapore."

Netizens have expressed support and pledged to walk all the way with WP.

Literally running or not, we hope that all candidates running for elections take care and stay healthy even as campaigning continues to unfold over the next five days.