Imagine this: A robot that’s capable of churning out a pizza every 47 seconds, up to ten pizzas at a time — yielding around 80 an hour — with perfect accuracy. After all, robots don’t forget recipes, nor do they mistake parmesan for pecorino when the line is out the door.

These robots, unlike their ersatz human counterparts, don’t even need a single toilet break throughout a shift. Ordering and payment, naturally, is also handled electronically. That’s what the Pazzi, Pazzi Robotics’ eponymous pizza robot, promises with its second robot-operated pizzeria that opened in Paris last year. It sounds almost too good to be true.

And in a sense, it is. The technology is by no means perfect — even if the French company is achingly close to getting there. In terms of uptime, CEO of Pazzi Robotics Philippe Goldman tells us they’re at 97 per cent. That remaining three per cent goes to maintenance, cleaning and restocking — not every ingredient can be restocked without shutting off Pazzi (which means crazy in Italian).

Speaking of ingredients, the Pazzi is perfectly capable of pressing out picture-perfect rounds of dough, upon which pizza sauce is slathered and with a menagerie of toppings. But those toppings aren’t prepped by Pazzi in-store. The pizza dough that the Pazzi flattens out with unerring precision is made by humans, with recipes from celebrity chef Thierry Graffagnino, a veritable maestro in the world of pizza.

Nevertheless, the company, backed by Singapore-based venture capital firm Qualgro and Partech, has made remarkable progress since its inception in 2013, overcoming key issues like “managing the process of making dough, from dividing it to pressing it” as well as “baking individual pizzas with different recipes in the same oven with the same cooking time”.

Simple enough problems for a pizza chef, but far more difficult for a robot — requiring a mix of “software and mechanical skills, plus organic knowledge”, says Goldman. 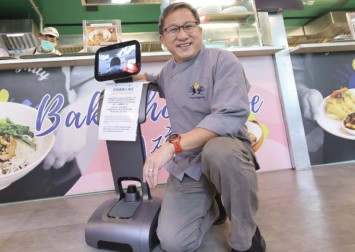 The results speak for themselves. Pazzi’s two pizzerias have churned out more than 50,000 pies — each going for just €7 to €14 (S$10.80 to S$21.60). The company is now selling the fully-automated pizza kitchens as a potential solution to the woes faced by the fast-food industry. That is, manpower shortages, hygiene and productivity — brought to the forefront especially during the pandemic.

And as for naysayers that prophesise widespread unemployment due to automation of fast-food jobs, Goldman believes that they’d replace underemployed fast-food workers instead.

“The labour shortage is so huge that if robots replace humans in fast-food and the virtual kitchen industry, it will leave more staff for classic, full-service restaurants who really need them — and where robots will have high difficulty penetrating. I do not believe in a future of robots in full-service restaurants,” Goldman adds.

At the end of the day, churning out pizzas is just the beginning for Pazzi Robotics — it’s the wetware behind the robots that are really valuable. “By the end of 2022, we will launch a standalone software capable of taking care of any autonomous cooking process, for any type of product. This will help operators to develop solutions quickly knowing that the software is key,” says Goldman.

They’ll continue to streamline the Pazzi in the meantime — Goldman tells us that they’re looking to halve the robot’s footprint from 60sqm to just 25sqm. As for us, we’re just excited to see what’s next — and maybe get a robot-made slice for ourselves when Pazzi rolls around this side of the world.